Did I almost jinx the baseball Cardinals? 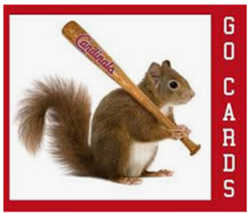 When I was a wee lad of 8 or 9, my brother, Rex, and I were superstitious football fans. For each game we would don our St. Louis Cardinals football jerseys, white football pants, red-striped socks, Cardinal-emblazoned helmets and take our positions around the TV. If the opposing team scored, we'd change spots. Otherwise, we wouldn't move except to go outside and throw the ball around at halftime. If drinking a lot of water -- or Shasta root beer, which was our favorite back then -- this could lead to some uncomfortable minutes in the living room. But at least the discomfort was lessened by keeping the opposing team's score down.

If one of us had to go the bathroom at the "wrong time," and the Cardinals lost, woe be to the one who broke the luck.

Urine is apparently a big part of professional sports superstitions. Baseball player Moises Alou would pee on his hands. More than a few hockey players have dipped their sticks in the toilet before big games. A famous soccer coach shook the dew from his lily in the four corners of a field to break a gypsie's curse. Many players -- from the NFL to soccer to mixed martial arts -- have developed unusual habits around when and where they make, or even how they drink, the golden stuff.

According to a recent story in Medical News Today, published Friday, Sept. 13, there are reasons more than a quarter of American adults tell pollsters they are superstitious: "Sometimes superstitions can have a soothing effect, relieving anxiety about the unknown and giving people a sense of control over their lives."

Psychologist Stuart Vyse, author of "Believing in Magic: The Psychology of Superstition," was quoted in the article pointing out rituals may in fact boost performance, especially in anxiety-related activities. "There is evidence that positive, luck-enhancing superstitions provide a psychological benefit that can improve skilled performance." From a baseball player adjusting his batting glove between pitches to a stage actor wishing a colleague to "break a leg," rituals can help defray anxiety and raise the mood, Vyse said.

"Even when we know on a rational level that there is no magic, superstitions can be maintained by their emotional benefit," Vyse continued.

There have been many odd sports superstitions in history: Michael Jordan wore his college practice shorts under his Chicago Bulls uniform. Former LSU football coach Les Miles ate grass from the field during pre-game warmups. Tiger Woods is back to wearing red on Sundays, and Serena Williams doesn't change her socks throughout a tennis tournament. A few years ago New York Yankees first baseman Jason Giambi sought to break batting slumps by wearing a gold thong underneath his uniform -- a superstition picked up by a few of his teammates, "because it always worked," Giambi said.

Dozens of players have quirky superstitions about not stepping on certain lines on the field. And many players stop shaving and grow beards until they win a championship. Tennis great Bjorn Borg may have been the first I knew, but who can forget the 2013 Red Sox playing against the Cardinals in the World Series that year? It was like a convention of lumberjacks.

Of course, crowds have their own superstitions, maybe the weirdest belonging to fans of the Detroit Red Wings hockey team, who throw octopus carcasses from the stands during the playoffs. "The Legend of the Octopus" started in 1952 when a fan threw a dead octopus onto the ice, the eight tentacles symbolizing the eight wins needed at the time to secure the Stanley Cup. The Red Wings swept the opposition, and octopi have been raining down in Detroit ever since. Today, the official mascot of the team is a purple octopus, and Detroit fans have created an etiquette (thankfully, no doubt, to those who used to get octopus down their backs) on how and when to properly launch the creatures.

When I wrote about the Cardinals last week, I was very careful not to project too much about the future. But I did say, "Since the all-star break, the Cardinals are 46-23 (before Tuesday night), and they're poised to win their division."

So, what happened? The Cardinals lost their next four games (while the second-place Brewers continued a torrid winning streak, at one point, having won 18 of 20 games). My colleague (and baseball purist) Lucas Presson warned me never to write about the Cardinals again. In the end, it worked out. The Brewers tailed off at a fortunate time, and the Cardinals thumped the Cubs, 9-0, on Sunday to break the losing streak and win the division on the last day of the season without a playoff.

I know I didn't cause the Cardinals to slump, and no sane person would think I did (Lucas). I also realize that superstitions are more for fun than efficacy. Still, the Cardinals start the playoffs Thursday in Atlanta. If the team returns to St. Louis in a hole, here's hoping the rally squirrel makes an appearance. In my older age, that's more comfortable than thinking I can avoid the bathroom for any length of time.