A rock, a man, a new generation 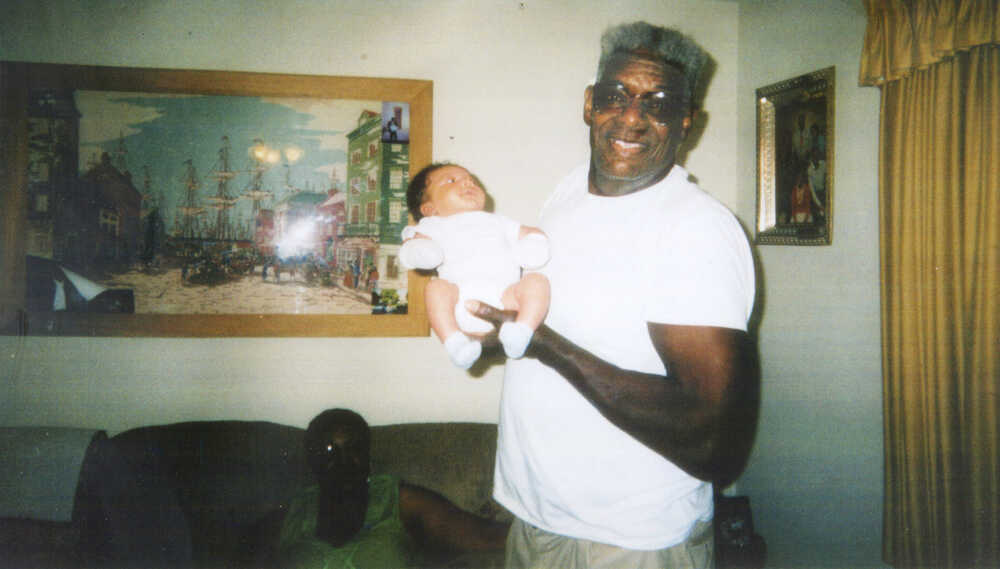 Charles Dale Ayers holds one of his grandchildren. Ayers passed away Sunday, Sept. 26, 2021. He and his many family members have been active in Cape Girardeau, Jackson and now across the country.
Submitted photo

Family members and friends poured into Greater Dimension Ministries Saturday to mark the life of "the last man standing," Charles Dale Ayers, one of the nine children of Lee and Odell Ayers -- six boys and three girls -- raised on Benton Street in Cape Girardeau in the middle of the last century. In inspirational remarks the younger generation challenged each other to be worthy of their heritage and true to God.

Their messages were ones that can resonate with all of us, even if you didn't know Charlie, a man who never failed to honk and wave at anyone he knew from a pickup he kept in the finest shape.

"You come from good stock," Marshall (Earl) Ayers told his cousins. "You come from a wealthy spirit. We all have gifts. But what are you going to leave the next generation?"

His cousin, the Bishop Calvin Bird, in thrilling voice and song, talked about the importance of coming home to church and asked bluntly: "Where is your worship?"

Pastor William Bird Jr., brother to Calvin and another nephew of Charles's, intoned about the loss of their uncle: "Uncle Dale was a faithful man. He was a great and caring man."

For more than 30 years, "Charles" played a role in my family's life, too. Before he retired, he was the best driver the Southeast Missourian ever had, taking pallets of newspapers and print products to customers in four states on long drives several times a week. People trusted him, and he proudly held the keys to dozens of buildings not part of our company so he could drop off the papers in the middle of the night. He also helped regularly at my parent's house, gardening or doing odd jobs. As tall and strong as an NFL lineman, he could change ceiling lights without a ladder or move stumps without sweating.

At the service on Saturday, his niece Brenda Ayers Parker told the story of Charles traveling to Dallas for his brother's funeral a few years back. It was the first time in his life he'd been on a plane. When asked how the flight was, Charles told her: "They kept looking at me... and asking if they could take my bags."

"You're a 6'8" black man with white hair, they must have thought you were a celebrity," she told him.

"But why did they want to take my bags?"

"That's what people do for celebrities."

Charles was never one to shirk work or hard labor or to complain (much). And his nephew, the bishop, aptly described him as "a provider" and "a man" in all that he did.

Charles battled cancer his last months. It came on quickly, and he was confined to a room at Barnes-Jewish Hospital in St. Louis with only his daughter Celestine allowed to visit (because of COVID protocols). Celestine is a nurse, and she was there every day for hours between shifts. When she asked her father, "What else can I do? How else can I serve you?" He responded, every time: "Being here is enough."

Then on the last day, after she prayed over him and felt the Holy Spirit guide her words, "He blew me a kiss. In the 52 years of my life, it was the first time he blew me a kiss."

The service was buoyant, heart-touching and regal. Music and songs of "thanks" -- including "This little light of mine, I'm going to let it shine" -- sounded out as an honor guard of Masons, sword and staffs held up, led an opening processional, followed by ceremony.

But it was nephew Marshall who started a theme in his remarks that was picked up by others.

He told about the "rock" in their family, Charles's mother Odell, who helped raise her nine kids, 65 grandchildren and 101 great-grandchildren before she passed away. He spoke about her and Charles's generation grounded in love, perseverance, work ethic and honesty. He talked about the importance of the Bible and of church.

Pastor William pointed to the future, too, "We can't do nothing about our past. But we can do something from this day forward."

Brenda remarked, "Uncle Dale was the last uncle left. He was the last man standing. We now have to keep on. We have to be what was lost. The family that prays together, stays together, and I don't want this to be the last time we're together."

During the service, each branch of the original nine children of Mother Odell stood up, and as Brenda described it, "We have come to represent."

May Charles Dale Ayers rest in peace. And may his family ever be strong in Christ -- and continue to influence the world in meaningful ways.

Jon K. Rust is publisher of the Southeast Missourian. He grew up with many in the Ayers and Bird families at Cape Girardeau Central. Besides a work colleague, Charles was also a friend.

Charles Ayers
Charles Dale Ayers, 76 years young, of Jackson passed away Sunday, Sept. 26, 2021, at Barnes-Jewish Hospital in St. Louis. He was born April 16, 1945, in Essex, Missouri, to Lee and O'Dell Ayers. Charles and Luella Ayers were married Dec. 27, 1966, in Bell City, Missouri...
News about Cape and Jackson matters. Sign up for free updates.
More from this columnist · Jon K. Rust