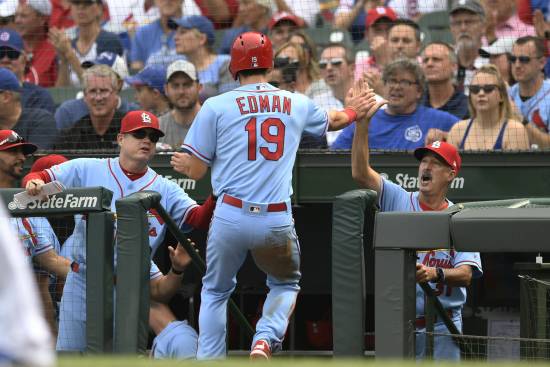 Has there been a more delicious regular season series for the Cardinals than their four-game sweep of the Cubs the past weekend? Each white-knuckle game was won by a run -- with the Cards three times taking the lead in their last at bat. Saturday's seesaw affair was particularly riveting, but how do you choose a favorite when each win is precious? It was the first Cardinals four-game sweep of the Cubs at Wrigley in 98 years, and it propelled the Redbirds into the playoffs for the first time since 2015.

Since the all-star break, the Cardinals are 46-23 (before Tuesday night), and they're poised to win their division. This time last week, it wasn't even clear they would make the playoffs. If the Cubs had swept them, the Cardinals would have fallen behind both Chicago and Milwaukee in the Central Division, and dropped behind others for a wildcard spot. So, the wins were huge. And they were scored without Kolten Wong, arguably their season MVP, who tweaked a hamstring in the first game and whose return is still unknown.

Meanwhile, do you remember a few years ago, when prominent Cardinal free agent Jason Heyward (remember him?) spurned St. Louis (after less than a year) for the North Side because he deemed the Cardinals a team destined for decline? Well, in the short term, he was right. Hell froze over, and the Cubs won the 2016 World Series, but since then the lovable losers have underperformed. Now, after spending tens of millions more than most teams and hauling in big name free agents, the small bears stand on the brink of at least bringing in a new manager, if not other changes. The Central Division's new dynasty was not only short-lived, it never actually came about.

Cubs fans may point -- legitimately -- to many untimely injuries, which severely hampered the club. But every team struggles through injuries (the Cardinals lost their fireball closer early in the year), and the great ones not only persevere, they prevail.

Over the weekend, that's certainly what the Cardinals did, in inspiring fashion, a different player rising to the occasion each game: the heroic Molina, ageless and zestful Wainright, irrepressible Edman, phenomenal Flaherty, redeemed and unrelenting Martinez, unbowed Carpenter, provident Goldschmidt, powerful DeJong, renewed Mikolas, feisty Fowler and a group of relievers that held together and battened down the hatches for an emphatic series of victories. The regular season ends on Sunday with the Cardinals closing out at home against, yes, the Cubs. Playoffs begin next week.

Downtown Cape Girardeau was abuzz last weekend. Friday night rain might have dampened attendance at Food Truck Friday, and Tunes at Twilight moved indoors, but on Saturday the sun was out bright along with thousands enjoying the Missouri Conservation Department's "Day on the River." The Downtown Market was packed. And in the afternoon, the Redhawks pummeled visiting West Virginia State 56-10 at Houck Stadium. It was a glorious day.

This weekend promises more fun -- with the Shipyard Music Festival on tap for Friday night and all-day Saturday. The 11 nationally touring bands will provide music and energy, but it's the crowd that ignites the joy. Children 10-and-under are free. General admission tickets are available at shipyardfest.com (delivered electronically) or during the festival at the gate (located near the intersection of Broadway and Lorimier), starting at 5 p.m. on Friday; 11 a.m. on Saturday.

Produced by rustmedia and The Scout, Shipyard is an event built to celebrate community, and you're invited. Let's have some fun!