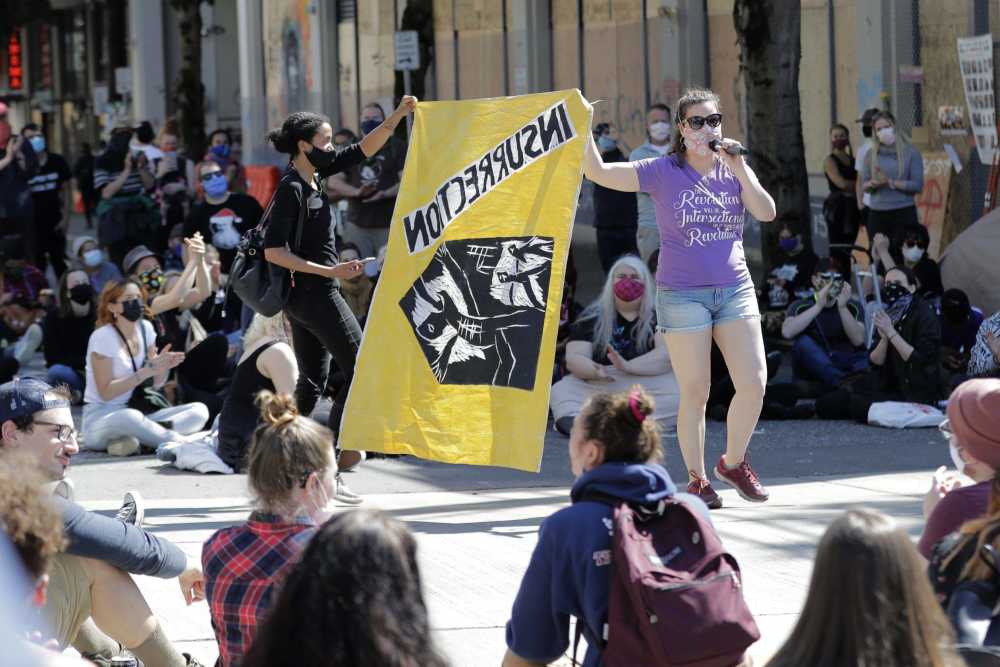 Protesters display a flag at a protest June 11, in front of the Seattle Police Department East Precinct building. The group, calling itself "CHOP," has occupied the area.

Hypocrisy and lack of seriousness abound, causing good people to question just how much politics taints everything in the world today. Determining approbation according to political favoritism is worse than dishonest. As for the media, its focus is often on drama and emotion, not helpful information.

In 2011, I spent several hours over two days at the “Occupy Wall Street” protest in New York City’s Zuccotti Park. In light of the protest taking place in Seattle, where protestors now calling themselves the “Capitol Hill Organized Protest” are occupying a portion of the city, let me share some observations. Both protest groups discouraged police inside their boundaries.

In New York, in the evenings and into the night, it was largely fun and festive, even if a bit grimy. Smart people were involved in figuring how to provide sustainable electricity, stream live online reports, organize marches to other areas of the city, and more. Celebrities streamed through, including at one point while I was there, Don King, the pro boxing promoter with the elevated white, wispy hair.

I asked folks who had clearly been in the park for a while – some who hitchhiked in from the Midwest – why they came and what was it like. A frequent answer: “To be part of history.” Some of the young women expressed frustration with parents and a lack of home support. Clearly, senses of “belonging” and “significance” were motivators. Almost everyone – not in leadership roles -- was open to me. Many were talkative. More than a few: bored, listless or high on marijuana.

What surprised me above all, though, was how many complained about being assaulted – or how someone had come into their tent at night. There was word, though none I spoke with experienced it directly, about rapes. What they also told me is that the organizers didn’t want negative media coverage and everyone was supposed to take their complaints to a designated justice group. But the several who complained to me grumbled that nothing ever happened. Meanwhile, for those in charge: The police, just like in Seattle, were viewed as the enemy.

Walking outside the protest area to where New York City police ringed the block, I mentioned the comments about “assaults” to a few officers, asking if they had heard complaints. One police officer looked at me suspiciously, shrugged, and basically said the protestors got what they deserved. If the protestors wanted to rule themselves and keep the police out, they shouldn’t be surprised by what happened. But if someone wanted to report a problem, “We’re right here.”

It wasn’t a particularly helpful attitude, but I understood it.

Much of my time at “Occupy Wall Street” I spent watching how “general assemblies” took place with the shouted repetition of questions -- and approval made by hand signals. The methods put power in the hands of the leaders. It was fascinating and somewhat depressing – reminiscent of Orwell’s 1984. But I gave mental credit to the organizers for establishing a system, albeit a manipulative one, for making people feel heard while creating dynamics that controlled and cut off those whose ideas were deemed unproductive.

I don’t watch TV news anymore and am not investing much time in reading or listening about the Seattle protest, so I don’t know if similar organizing methods are being used. I also have nothing original to say about the different reports emerging from Seattle about how full of communal unity the protest is or whether it’s a gathering rife with internal squabbles and lawlessness. But I would caution anyone who does watch TV – CNN, MSNBC, FOX, etc. – to take it all with more than a few grains of salt. Cable news channels thrive on drama and emotion, and they play to their particular audiences. So much is slanted.

For crowds to occupy a city’s land illegally is not sustainable, though. Nor is it healthy or wise. At some point, the Seattle crowd will need to disperse. Or as with Occupy Wall Street, it will rightfully be cleared. No doubt, if forced out, some protestors will seek to appear victims for propaganda purposes. By staying illegally and defiantly where they are, they are already poised for such a statement. Parts of the media – and political establishment -- will assist. Remember that, too.

Unfortunately, some health officials, most major Democrat politicians, and some of the national media have undercut their credibility – and a vital message -- by encouraging mass demonstrations during Covid-19.

The more that is known about the virus, the more important masks and the avoidance of large crowds is understood. (President Donald Trump lost his credibility on these particular messages long ago.) And yet, discouragement for mass demonstrations, which frequently entail hours of close contact with others, was non-existent or feeble by those who otherwise have witheringly decried the president. More prevalent was the type of attitude espoused by the head of the New York City Council health committee, Mark Levine.

“Let’s be clear about something,” Levine said. “If there is a spike in coronavirus cases in the next two weeks, don’t blame the protestors. Blame racism.”

NYC Mayor Bill De Blasio, in a press conference last week, reinforced the message: “When you see . . . an entire nation, simultaneously grappling with an extraordinary crisis seated in 400 years of American racism, I’m sorry, that is not the same question as the understandably aggrieved store owner or the devout religious person who wants to go back to services.”

So to De Blasio: Protesting in the tens of thousands is OK; going to work or church is dangerous and unimportant. Which at least partly explains why his administration announced a new policy this week around tracing coronavirus cases.

“The hundreds of contact tracing workers hired by the city under de Blasio’s new ‘test and trace’ campaign have been instructed not to ask anyone who’s tested positive for COVID-19 whether they recently attended a demonstration,” reported The City digital newsroom on Sunday.

“If a person wants to proactively offer that information, there is an opportunity for them to do so,” Avery Cohen, a spokesperson for de Blasio, wrote in a statement.

Proactively? Without being asked?

It’s this type of hypocrisy and lack of seriousness that cause good people to question just how much politics taints everything in the world today. Either Covid-19 needs to be taken seriously or it doesn’t. Determining approbation according to political favoritism is worse than dishonest. At least Trump is consistent. He wants the economy to re-open, regardless, and he has a case for that (not letting the “cure be worse than the disease.”) Democratic politicians who seek to keep the economy locked down while promoting mass demonstrations diminish themselves.

Local protests continue to be peaceful, and good dialogue is taking place around the area, bringing people together to talk and share perspectives. But problems are lurking at the edges, which is why the job of a police officer is so fraught with stress. At any moment, things can turn, as was evidenced recently in Atlanta, tragically, and in Albuquerque, New Mexico, frighteningly. A couple weeks ago, counter protestors in Perryville scattered baby pacifiers toward a crowd of demonstrators. Thankfully, the incident didn’t provoke a response, and demonstrators simply placed the pacifiers in the trash. Later, a man who yelled “white power” slogans was detained for bumping a demonstrator. He has since been charged with assault.

Perryville police deserve kudos for maintaining the peace in a judicious way.

For those who deny that there is racism and prejudice in our country, think again. It exists. It may not be systemic – and the statistics indicate it isn’t – but it’s there at the fringes. We still have much work to do as a nation. 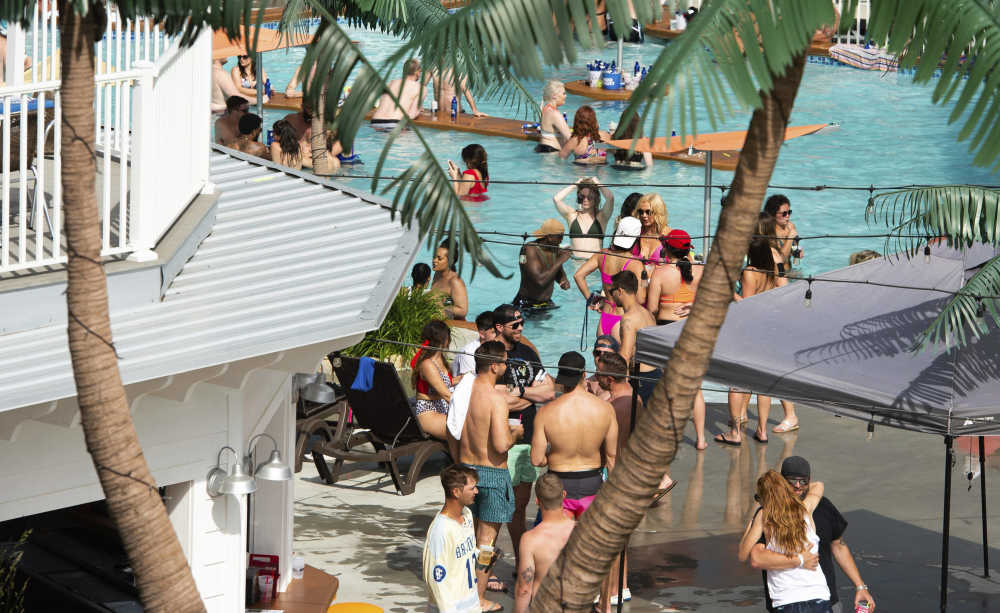 While still low, Cape Girardeau numbers bump back up. Here's why
Jon K. Rust
"We are continuing to see community spread, and with an increase in testing and reopening, there will be an increase in case numbers," said Maria Davis, health educator with the Cape Girardeau Public Health Center.
More from this columnist · Jon K. Rust