Traveling -- like life -- never goes as planned, but remains beautiful 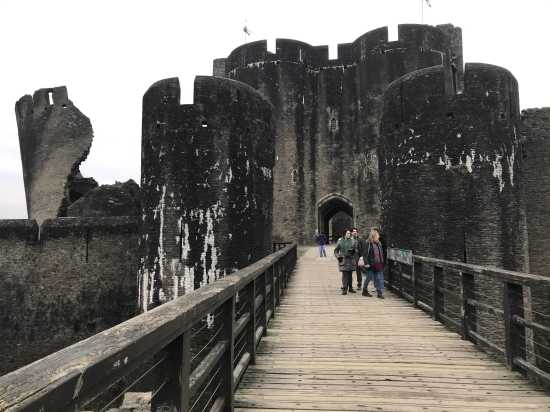 On a flight to London the first week of January, I heard a particular announcement for the first time in my life: "If you are not using your bag for nausea, please think about offering it to a neighbor in need. No one is allowed to the lavatories." It was a turbulent ride, to say the least, echoed later by a flight attendant as "the worst [he'd] ever experienced." Thankfully, transportation the rest of the journey was non-eventful (except for the young man, wearing big headphones, who belted 80s pop songs at the top of his lungs on a local train outside of Caerphilly. My wife shushed me the few times I started to join in).

Victoria and I were traveling to Cardiff, Wales for an academic conference on the Russian Revolution, where she was presenting a paper. It was not a destination previously on my bucket list, but Wales turned out to be a wonderful, magical place to visit, "the castle capital of the world," with more castles per square mile than any other country in Europe. Although our time was short, we were able to visit five of the most dramatic castles near Cardiff; taste some of the local food, including ffagadau and Welsh rarebit; catch a rugby game; and explore the city's historic arcades (which are narrow shopping streets from the Victorian and Edwardian era enclosed by glass above and with quaint boutiques, tea rooms, dress shops and more, all around).

Besides the turbulence, the only hiccup in the trip was that the rental company made a mistake with the car I hired. In Wales, they drive on the left side. So I made sure to reserve an automatic. But when we arrived early on a Saturday to pick up the car, all that was left (save one) were manual shifts, which I thought a little too ambitious. (I don't mind manual, but with my left hand in a strange, narrow land?) We declined the 12-seat van they offered, the only automatic in the shop (which was, ahem, kindly offered at the same rate as our reserved budget vehicle). The mistake turned out to be providential. We didn't travel as far as we had intended over the weekend, but what we saw was spectacular, and we got there from cobbling together Uber rides, trains, public buses and hiking.

I also realized, watching how the locals drove, that I would not have been ready to drive (yet). Some of the narrow streets in villages outside of the capital city of Cardiff were not originally constructed for cars or parking. So, what they do is use one of the "two" lanes of traffic for parking. If that happens to be your side of the street, then, you're basically driving in the middle of the road with more than half your car in the other lane. If an auto approaches from the other direction, it simply drives onto the sidewalk to make space to pass (that is, if there is space on the sidewalk). Meanwhile, on these narrow streets, because only one side of the street is used for parking, it's okay to pull in and park with your car pointing either direction. Basically, streets in some of these small towns looked one-way with cars parked in both directions, and cars driving in both directions, oftentimes on the sidewalks.

And we in Cape Girardeau think roundabouts are complicated!

After watching and learning, I'll be ready to drive in Wales next time, if God gives us the chance. It's a beautiful place worth the journey.

To me, one of the joys of travel is simply living in the moment, not worrying about work or life elsewhere but focusing instead on what's taking place in front. Watching. Listening. Taking in the fragrances and aromas. Tasting new tastes. Learning. Travel never goes exactly as planned. But that's part of the charm and the challenge, and the best travel companions are those who embrace the unexpected. (Thank you, darling.)