Ray Ritter, head of a family, pillar of a community 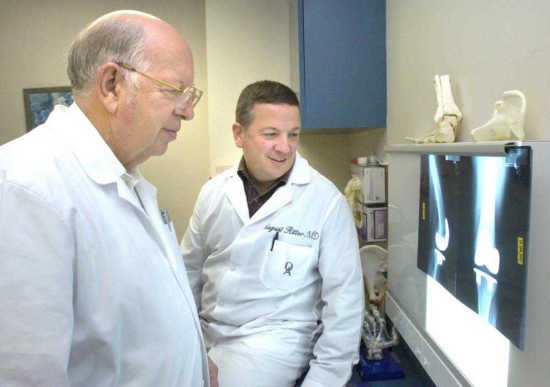 A pillar of the medical community for many decades, Dr. Ray Ritter died last week, surrounded by family. He had a distinguished medical career, which included performing the first total hip replacement in Southeast Missouri and the second in the state of Missouri. At different times, he was president of the medical staff at Saint Francis Medical Center and Southeast Hospital. His list of education and professional accomplishments is long.

I was unable to attend his funeral but spoke with some of his friends. They told about his generosity and his family. If someone didn't have the money for help, he didn't charge them. He was known for being a brilliant surgeon, kind, generous, loving and compassionate. Many people in Southeast Missouri would not be walking around today without his help and expertise. His passion and talent helped establish the high quality of healthcare we're blessed to have at both hospitals today.

From 1967 to 1970 he served in the U.S. Medical Corps in Munich, Germany, and from the experience, he brought home not only new techniques and equipment, but a cosmopolitan view of the world. Among his loves as Parkinson's tugged at his body was painting scenes from photographs taken during his prolific traveling.

His friends also talked about him as a devoted husband and father, loving, brilliant and dignified, and that is where I saw him in action. I knew Ray Ritter through my brothers and sisters growing up, or from seeing him and his beautiful wife Ann walking into their church, First Presbyterian, or at arts or university events around town. Together, they were the kind of caring and compassionate couple that simply made you -- and anybody who came across them -- feel wonderful to be around. Ann remains that way; she is a special, vivacious, elegant person.

Their children are special, too, and accomplished impressively in their own rights: from medicine to the FBI. Son John, another talented doctor, died too soon. No doubt he was waiting to greet his father at heaven's gates.

Here on earth, a special tribute was made upon Ray's passing by some who knew him well. On Facebook, pictures were shared of friends dipping a Snickers bar into rum. The message from his son August read: "To our friends and family, the outpouring of love and support means so very much to us today. Please know your caring made a great day out of sadness. My dad once described a Snickers bar dipped in rum as decadent. He was right."

If such a treat is self-indulgent, it was a treat earned through a lifetime of service and generosity. I raise my glass to a unique individual and family who made and make a profound impact on our community.

Ray Ritter in career and volunteering had rare impact. In a few months, the Southeast Missourian through its sister publication B Magazine will be recognizing other individuals who have had significant impact on their communities through business engagement and success, and through community involvement and volunteering. Winners come from throughout the region.

Since the award was established several years ago, the common thread has been the recognition of those who have proven to be doers -- someone, who isn't content to sit on the sidelines and watch the status quo continue around them. They are individuals who when they see there is something that can be done to make the world better, they do it.

And they often do it in trailblazing ways, like no one else, displaying a passion for innovation and service.

If you know of someone worthy of a NewsMaker award, go to www.semissourian.com/newsmakerform. Deadline is June 30. The awards, sponsored by First Midwest Bank, will be bestowed in September.