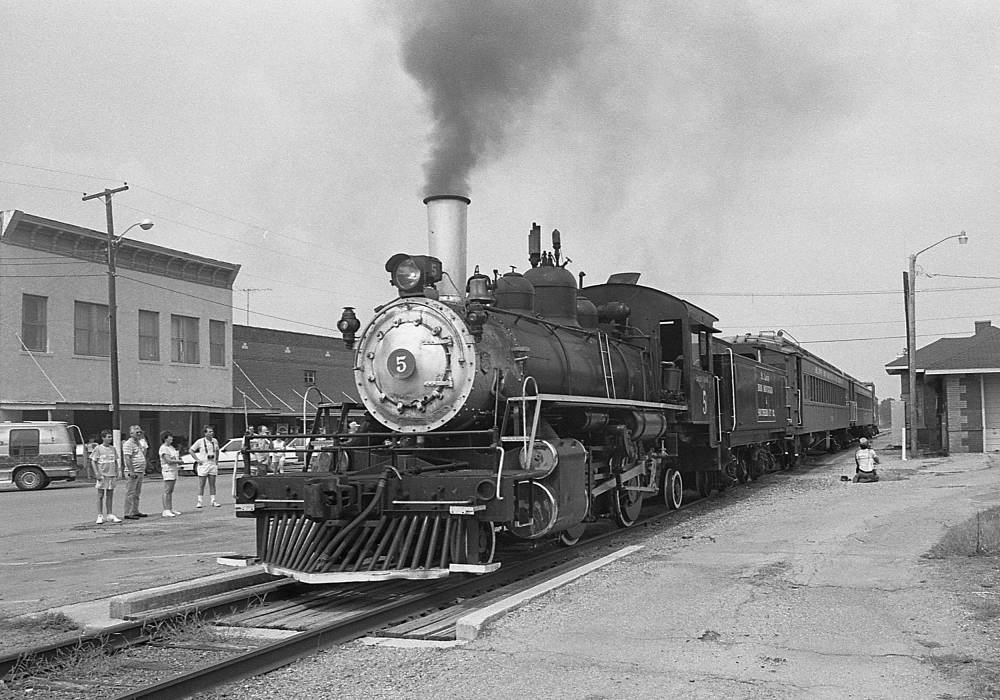 Attendance was down somewhat from last year's Railfan Weekend, which was held in November, but Camille Chappuis, a spokesman for the railroad, pointed out that was due mainly to the heat and humidity.

"I'm sure that when Railfan Weekend '89 comes around, we'll be holding the event later in the year, perhaps in late September, when the weather is somewhat cooler and everyone is home from vacations," Chappuis commented.

But he emphasized railroad officials certainly were not disappointed with this year's event.

Perhaps the biggest highlight of the weekend, Chappuis pointet out, was Sunday's day-long trip from Jackson to Oran, via the Jackson & Southern Railroad and Golden Cat Railroad tracks.

Railfans got an extra treat while the steam passenger train waited at Delta to cross the interlocking tracks with the St. Louis-Southwestern Railroad (Cotton Belt).

As they watched and took lots of photos, three Union Pacific freight trains passed by before the steam passenger train received permission to cross the tracks and proceed to Oran.

At Oran, more photos were in order as Steam Engine Number Five backed up, then pulled up to the former Missouri Pacific depot in Oran; recreating the arrival of a passenger train in town.

Until Sunday, there hadn't been a fare-paying steam passenger train in Oran for more than 40 years, Chappuis noted.

"We hope to make the Jackson to Oran trip an annual event of Railfan Weekend," he noted. "It was obviously very popular with the railfans and their families."

The Golden Cat Railroad was created when Ed Lowes, well-known cat fancier and president of Lowes, Inc. - manufacturer of Kitty Litter - purchased the railroad tracks from Delta south to the Lowes plant south of Oran.

Because the run from Delta to Oran was foreign territory for the Iron Mountain rail crew, a pilot engineer and conductor from the Jackson & Southern assisted in the move over the Golden Cat tracks southward from Delta.

Chappuis said another highlight of Railfan Weekend was a nighttime photo session of the steam locomotive and the J & S Railroad's GP-9 switcher number 103, standing head to head in front of the former Missouri Pacific freight and passenger depot in Jackson.

The depot, with the assistance of Feeder's Warehouse in Jackson, which owns the property, was specially restored, complete with Missouri Pacific Railroad signs, to appear much the same as it would have looked in the early 1940s.

Outside the depot were cream cans, and other freight, along with a freight and baggage wagon.

Although Railran Weekend '88 is now history, Chappuis said planning is already under way for an even bigger and better Iron Mountain Railfan Weekend in 1989.