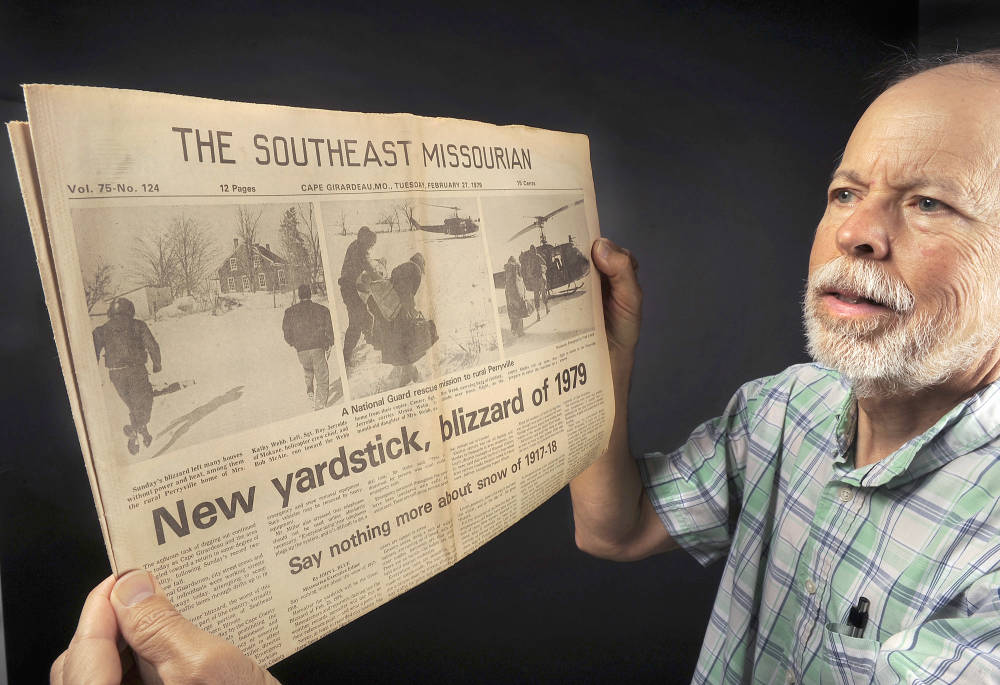 Fred Lynch shows the Feb. 27, 1979 edition of the Southeast Missourian with its coverage of the Blizzard of 1979. His photographs show a National Guard helicopter crew rescuing Kathy Webb and her 3-month-old daughter, Alyssa, from their rural Perryville, Missouri home that had no power or heat.

The definition of -30- signals end of an era

When I started my career at the Southeast Missourian in 1975, reporters used typewriters to turn out copy for the newspaper. They would type -30- at the end of their story.

One theory of the origin of -30- is from the 92 Code adopted by Western Union in 1859. The numerical signal sent over telegraph lines meant “No more - the end.”

The remnant of a bygone era will be found at the end of this blog, which is the last of 1,228 that I have produced since Jan. 19, 2009 at semissourian.com.

Most of the earlier blogs showcased pictures taken by Garland D. Fronabarger who pioneered photography at the Southeast Missourian in the 1930s. He used a Speed Graphic 4x5-inch film camera to document the Cape Girardeau area for over three decades before switching to a 35mm camera. He left thousands of the large-format negatives to the newspaper which had them digitized. It was the high-definition medium of its day, able to record fine detail. Many of the photos were never published in the newspaper, and some of these “mystery photos” have been identified by our readers seeing them for the first time in online photo galleries.

Fronabarger began his career as a reporter at The Missourian in 1927. That was the year the $1.6 million Mississippi River bridge was under construction. The federal census estimate for Cape Girardeau was just over 14,000.

With a modern digital camera, I documented the demolition of that bridge on Sept. 9, 2004 as spectators on the riverfront watched the surprise ending. The blast did more damage than expected, leaving wreckage scattered across the river like the backdrop of a disaster movie. I also covered the grand opening of the new Bill Emerson Memorial Bridge nine months earlier.

Fronabarger had become a busy freelance photographer, keeping a darkroom at the newspaper which had first call for his services. He started a weekly business column in 1964. By that time, The Missourian was employing other photographers to illustrate the daily paper. When I came aboard, Frony, as most everyone knew him by, was taking only occasional business photos. Once I asked him why some people called him "One-Shot Frony." He explained, "I had to buy my own film."

In his final column published March 30, 1986, Frony expressed his closing thoughts on his career which are similar to mine. I leave the newspaper after 43 years with gratitude and so many great memories, experiences and friendships. To everyone I have met, thank you for giving me the privilege of telling your stories with my camera. I won’t soon forget the free admission to sports events, but I wonder if I can make the transition to spectator in a seat far back from the action.

GDF: Today’s “Metro Report” is the last one I will write. There comes a time when everyone has to step out of the harness and let better horses take over. Not that you plan it that way, but we all know it’s inevitable….So, after 58 years and six months, it’s a big THIRTY.