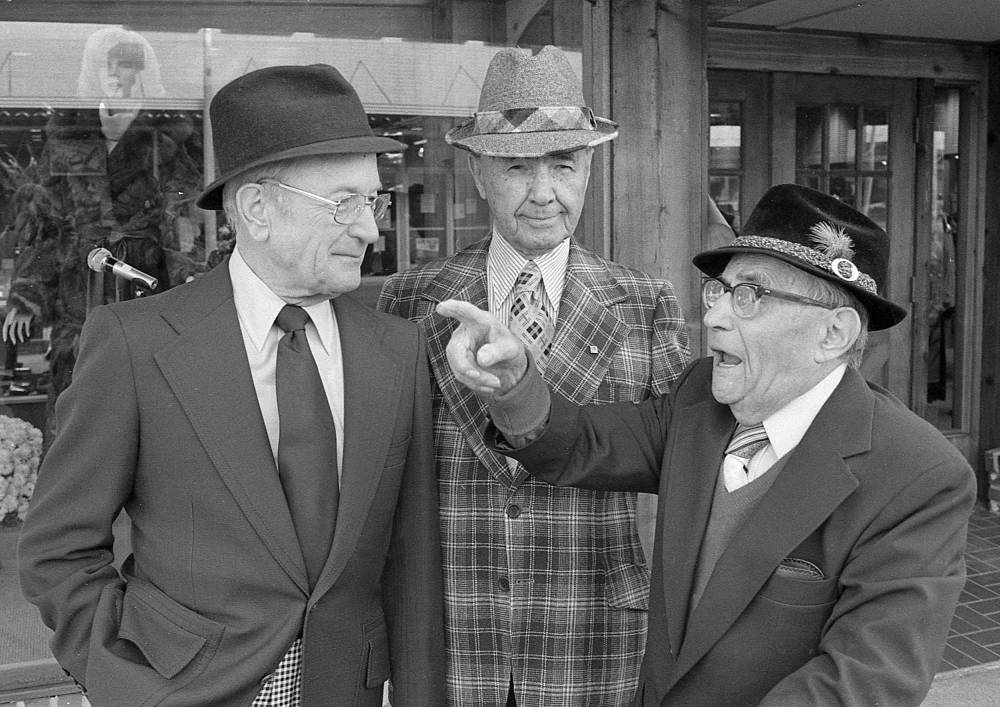 ABOVE: Main street has changed, but the memories for Louis Hecht, founder of Hecht's Store here in 1917, are still vivid. Here, R.E.L. Lamkin Jr., left, (whose father, the late R.E.L. Lamkin, was a longtime friend of Mr. Hecht) and Rush Limbaugh Sr., also for many years a friend of the venerable businessman, listen as Hecht points out the classic architecture of the store at 107 North Main. Hecht, who has made his home in Las Vegas, Nevada, for some years, was in Cape Girardeau today for the grand opening of Hecht's Too at 46 North Main. His son, Martin Hecht, is now president of Hecht's Store. BELOW: Louis Hecht speaks to the crowd with his son, Martin Hecht. See story below. (Fred Lynch photos) 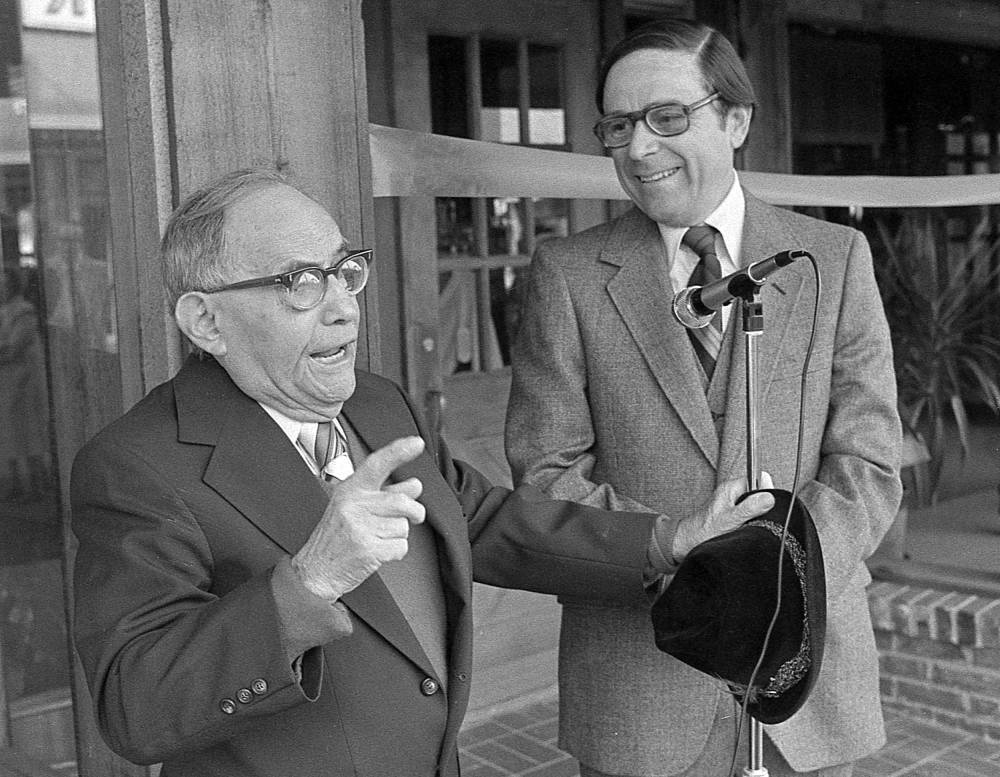 Louis Hecht was back on his beloved Main street today, and neither the age of the thoroughfare nor his own 90 years has dimmed the optimism of growth and stability that the venerable businessman has nurtured for well over a half century.

Hecht, who has made his home in Las Vegas, Nevada, for some years, was in Cape Girardeau to attend the grand opening of Hecht's Too in a newly-renovated structure on Main street. He founded Hecht's Store here 68 years ago.

Storefronts along Main have changed since Hecht set out from Poplar Bluff to seek his fortune here in 1917, but memories of those early days, like the bright lights in the store windows, are still clearly--and fondly--reflected.

Hecht, one of 10 children, had been associated with his father, Jacob Hecht, in two stores at Poplar Bluff before coming here.

"One day I told my father, 'I think I'll go to Cape Girardeau'," Hecht said. "I took the Frisco train to Cape and got a room at the old St. Charles Hotel. I walked up and down Main street and I thought, 'This town doesn't look bad to me'," he recalled during an interview at the home of his son, Martin Hecht.

It was with a gentle humor that he recalled the advice of well-meaning friends who urged him not to open a business on Main "because everything is going to Broadway."

But it was Main street that captured Hecht's fancy, and he went into business, first in a small shop at 135 North Main. Among specials listed in his newspaper advertisement for the grand opening were men's suits at $9.95 and ladies' coats at $4.98.

About a year after opening that store, Hecht was "called to the colors" and went off to serve in World War I. He sold his stock to Herbert Moss of St. Louis. He returned after the war, and on July 10, 1919, opened a new store at 127 North Main.

The business prospered for the young merchant who had set out on his own that spring in 1917 with $200 in his pockets, and as it expanded, Hecht acquired adjacent property.

When he decided to build a new store, he recalled seeking the opinion of Fred Naeter, a friend and one of the founders of The Missourian. "He (Naeter) recommended Tom Barnett for my store, the St. Louis architect who had designed The Missourian Building," Hecht said.

"He said to me, 'If you're going to build a store, build a store!'" That he did, also using the same contractor who had worked on The Missourian project in 1925, the late J.W. Gerhardt.

His goal, Hecht said, "was to build a building that won't need any improvements for 25 years." Hecht incorporated into that structure many new design trends found only in major cities. And in turn, the structure drew many to Cape Girardeau for the express purpose of inspecting its architectural beauty.

The building opened in late 1927, and cost $80,000 to build--a sum that was in those days a princely one. "I was severely criticized by some local people for spending that much money," Hecht recalled. "But it was a beautiful building. It still is. After 50 years, that building is still good."

It was a long way from the first store that Hecht rented for $25 a month.

The friendships that Hecht formed in the foundling years of his business also prospered and hold a special place in his thoughts yet today, he said.

"The morning I opened my first store, Bob Lamkin (the late R.E.L. Lamkin, longtime president of the Buckner-Ragsdale Co.) walked across the street and said, 'I want to extend my congratulations. You're coming to a good town.'

"I never forgot that. He had faith in Main street, too, and we always remained friends."

Cape Girardeau, Hecht said, "has been in my heart all these years. When I started here, a lot of people loved this town like they loved their homes. I still love this city.

The foundation of the Barnett Building that still houses Hecht's was "like a fort," Hecht said. And for him, Main street has the same firm foundation and a pride constructed of something much stronger than mortar. It is a pride Hecht built from a vision, of the future, and one that has continued to flourish in his heart.

The grand opening today of Hecht's Too at 46 North Main, said president of Hecht's Store, Martin Hecht, "is the beginning of what we hope will be the downtown redevelopment that we have all been looking toward these past three years."

Approximately 100 persons attended ceremonies at the store including Mayor Paul Stehr, who commented that the newly-renovated structure "certainly is a fine start toward that renovation.

"It's good to see businessmen investing on Main street and looking toward the future," the mayor said.

Renovation work on the building, which is thought to have once served as headquarters for General Ulysses S. Grant, was a $100,000 project, one of the most sizable along Main street in recent years.

Louis Hecht, founder of Hecht's Store here in 1917, said he regards the expansion of the business as a "continuance of visualizing the future of the city."

The new store contains 2,500-square-feet of floor space. Its interior was designed by a team of leading Midwestern designers, with the newest in fixturing, lighting and merchandising. Contractor for the project was the Ralph Construction Co.

James Cairy, also associated with Hecht's, said the interior design of Hecht's Too is in keeping with the latest concepts in fashion merchandising. Some track lighting is utilized in the new store, along with attractive three-level aluminum stripping on the ceilings.

The store features an updated emphasis on junior-sized career clothing. "We've created a new area for Hecht's," said Cairy. "Hecht's Too is a special environment for the career-minded young woman."

The store offers a wide fashion variety of separates, active sportswear, coordinates and a full line of junior-sized coats. It also is an outpost for Estee Lauder cosmetics. Manager of Hecht's Too is Diana Regelsperger.

The original Hecht's Store has also undergone some interior facelifting with the expansion of its jewelry and cosmetics departments. The store now carries the Clinique line with Laura McGinty as Clinique counter demonstrator. Terry Howell is the store's Estee Lauder demonstrator.

The jewelry department has been enlarged to carry an extensive line of all solid 14-carat jewelry.