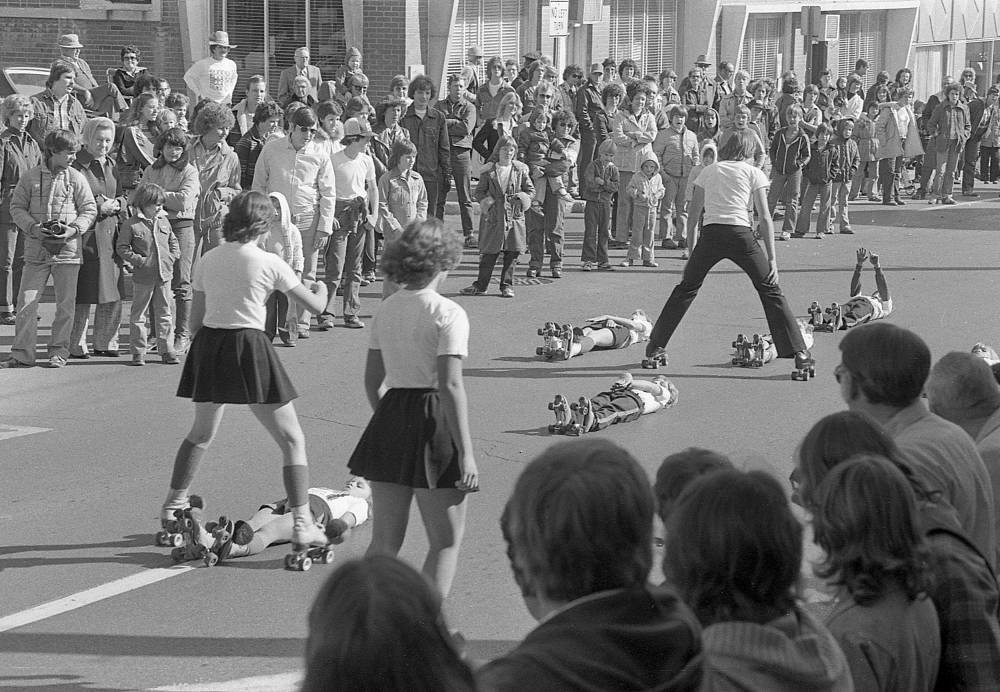 Members of the Willow Grove Rockets Skate Club of Chaffee, Missouri perform one of their routines on Broadway during the SEMO State University Homecoming Parade on Nov. 3, 1979. Below, Eric Foster of the club performs his Russian Tap Dance on a board atop the club's emblem during the parade. See story and more photos below. (Phil Nash photos) 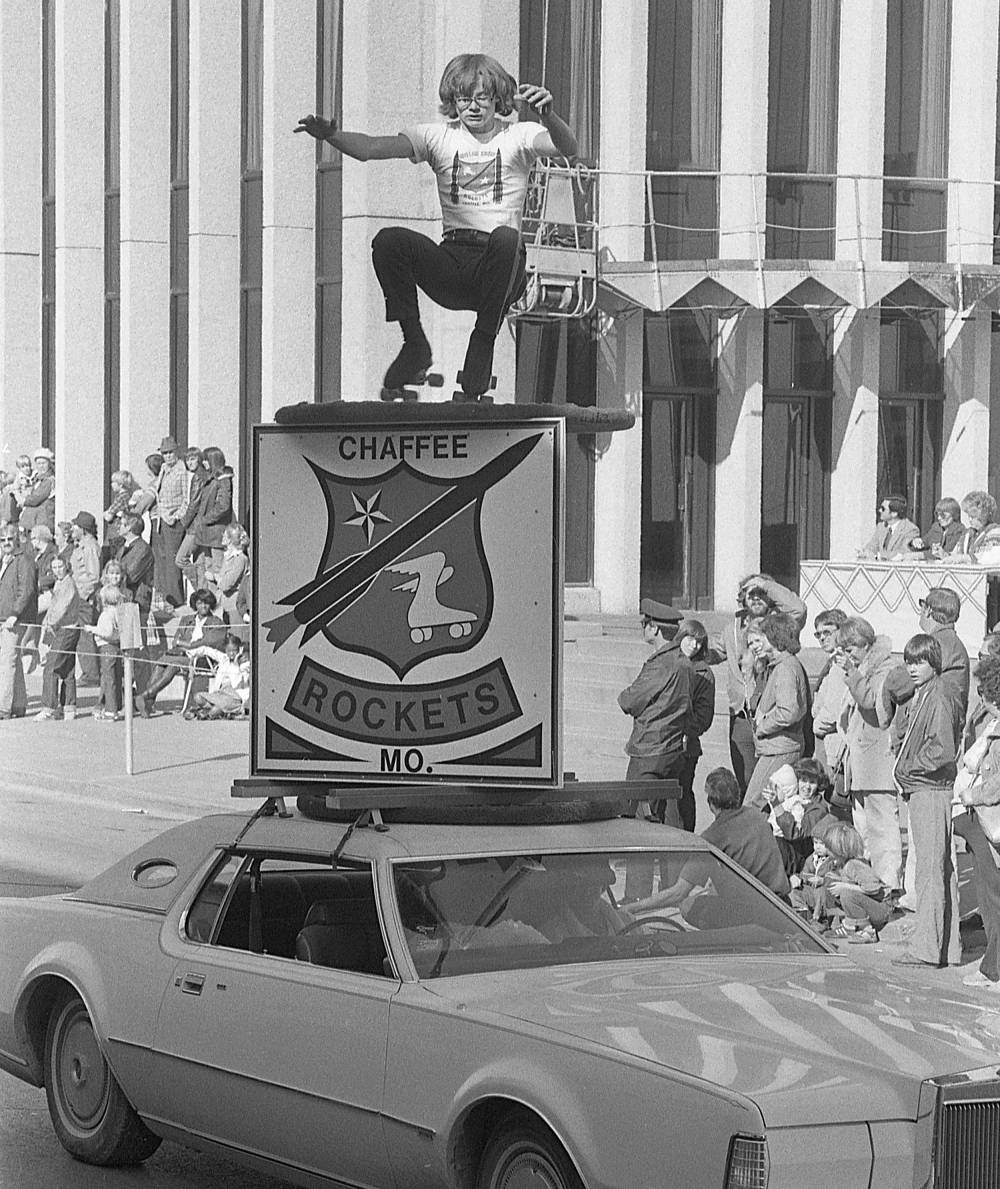 Roller skating is nothing new to Grojean. His family has been in the roller skating business since 1950 when his parents opened the Willow Grove Roller Rink here.

During the 1950s, Grojean spent about five and a half years working in St. Louis. He started out working at a chemical plant and later owned his own restaurant before returning to Chaffee in 1958 to manager the roller rink.

"But even while I was up there (in the St. Louis area), I did a lot of skating at a roller rink," he recalls.

Once Grojean took over as manager of the Willow Grove Roller Rink, it didn't take him long to start his first skate club.

In 1959, he started the Willow Grove Rockets Skate Club. Since that time he has had five separate skating clubs, all using the name Rockets. He explains that one group of skaters would usually drop out after several years and then he would start another club.

His current Willow Grove Rockets Skate Club is his fifth group. The majority of those members have been together about three years.

"But instead of phasing it out this time, we plan to continue the skating club by taking in a lot of new members," notes Grojean.

The skating club has grown over the years to its present size of about 100 skaters in uniform.

"Every year we take in 20 to 40 new members," says Grojean. "We are now serving some of the original members' grandchildren," he adds.

Because of scheduling conflicts with their jobs or school activities, not all 100 members are in attendance at any one performance.

"Some of them are in (high school) band. I recommend that the school activities have got to come first," the skating rink manager says.

The interest shown in the club by Southeast Missouri residents means that "I'll probably be adding several more towns to this list soon," he added.

Grojean explained he started his first roller skating club because of a lack of interest in professional style dance skating.

"I was teaching professional style dance skating at the time. But the problem was that nobody wanted to sit and watch it," he remembers.

Because of that, his skate club has concentrated on more acrobatic type stunts such as spins and jumping barrels. But his group is currently working on a new disco dance number which Grojean said will be centered around 1950s dance moves.

The Willow Grove Rockets originally performed at area roller rinks because the hard wheels on the skates made it impossible to perform stunts on rough street surfaces.

The problem with performing at area rinks was that residents of other towns and members of their towns' skating rinks often resented being kept off the floor by a performance of the Rockets. "We had trouble finding rinks to perform at," he pointed out.

That problem, however, was eliminated with the advent of the softer polyurethane skate wheel which made it possible to perform on the streets.

For about three years now, the Willow Grove Rockets have been displaying their skills in area parades, according to Grojean. The group no longer performs at roller rinks.

Since that time the Rockets have appeared in the SEMO State University Homecoming Parade twice and have made appearances in Jackson's Christmas Parade and in the Southeast Missouri District Fair Parade.

The Chaffee club won a trophy at this year's fair parade for being the most entertaining entry.

The group has also appeared several times on local television.

Some streets, such as those at Jackson, are rough to perform on. But Grojean noted that the SEMO Homecoming Parade is "ideal." He attributes that to the fact that Broadway is a relatively smooth street to skate on.

Performing on the street is not easy. According to Grojean, "It takes four times the power and energy to perform a stunt on the street than it does in here (a roller rink)."

The Chaffee skate club coach said his club had planned to perform its act about three times in each block during this year's Homecoming parade, "but we ended up doing it about five times in a block.

"The crowd clapped and cheered so loud that part of my unit couldn't even hear my whistle (by which he signals the skaters)," recalled the stating rink manager.

"Everything went great for us," he said of the SEMO Homecoming Parade.

Grojean maintained that "this is the only group anywhere that does this kind of act in the streets."

The roller skating coach said he and his club members have designed every stunt they perform.

"We designed everything we've got ourselves. Every act we've got, I've named myself. About everything we know or do on skates was learned right here over the years," noted Grojean as he pointed out his skaters practicing at the Willow Grove Roller Rink.

Grojean says he generally works with his skaters during regular skating sessions on Wednesday, Friday, Saturday and Sunday nights at the Chaffee roller rink.

The roller rink, which was enlarged in 1960, features two rinks. The original rink is now used for beginners, according to Grojean.

The business is a family affair. His mother takes care of the skate rental part of the business.

His son, Bobby, now 6, is a member of the Rockets and can often be found at the rink. Grojean said his son has been on skates since he was 18 months old.

"It takes about three years to train a person from scratch to the point where he is confident enough to perform on the streets," said Grojean.

Surprisingly, he said the skaters usually are taken out on the streets only once before a parade performance.

The Willow Grove Rockets currently are working on some new stunts. One of those, to be unveiled at the Jackson Christmas Parade on Dec. 1, is a jump over a car.

"There is only one problem," Grojean remarked laughingly. "I went out and measured a Fiat the other day and it is too small."

Concerning the car jump, Grojean pointed out, "We've not even attempted it before." He said the jump will be performed three times during the course of the Jackson parade.

He acknowledged that there is an element of risk in every stunt. "Every one of these kids has to trust me almost completely."

During his years as a skating instructor, none of his skaters has had any serious accidents.

He points out that the only thing that can defeat his club is the weather. According to Grojean, his group will not perform in parades on wet streets.

The skating coach is proud of his club and particularly the efforts of his skaters.

"I've taught wrestling, judo, and skating. I've worked with kids all my life. And there's no limit to what these kids can do.

"It's a lot of work to work with these kids, but it is also a lot of satisfaction," he pointed out.

Grojean said he has seen interest in roller skating come and go. But one thing has remained the same--his belief in his skaters and the Willow Grove Rockets Skate Club. 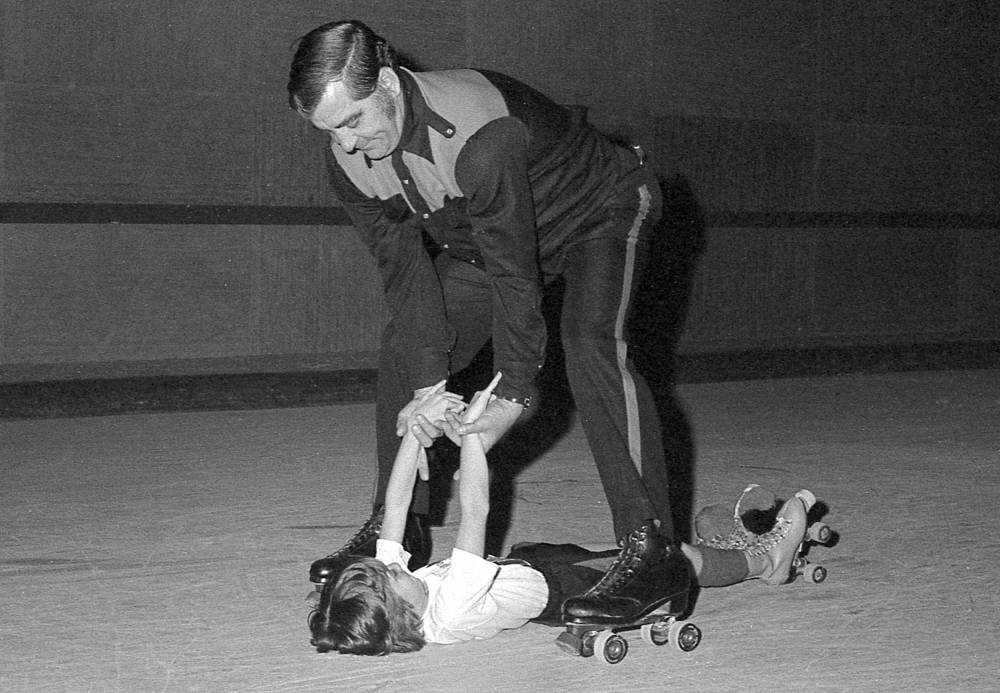 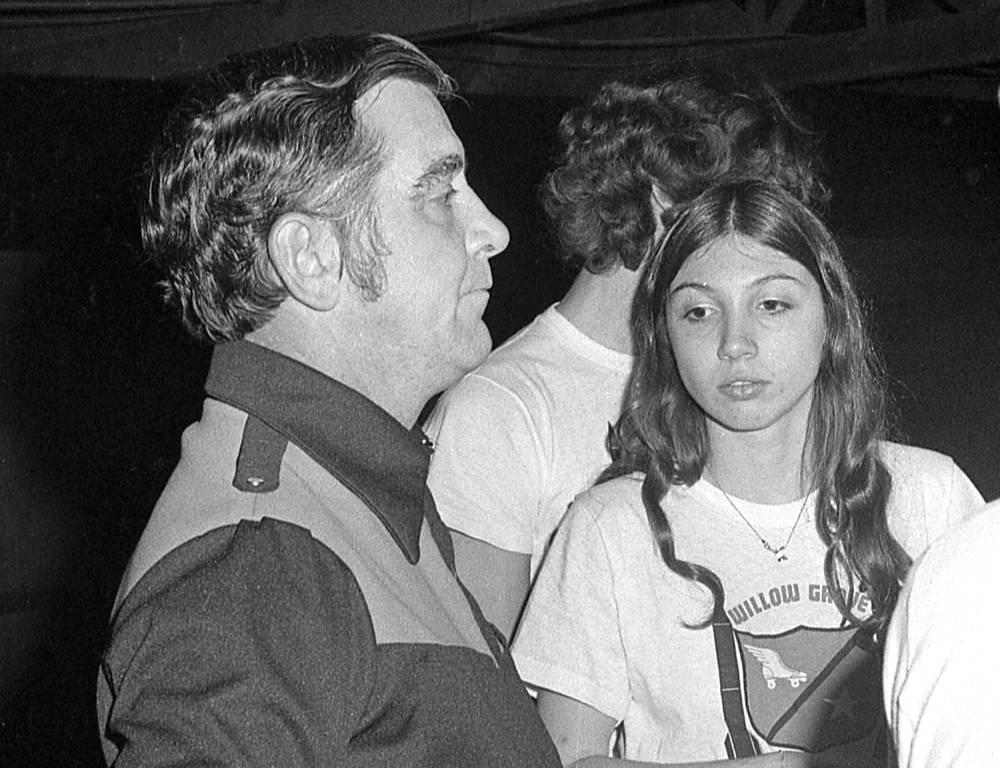