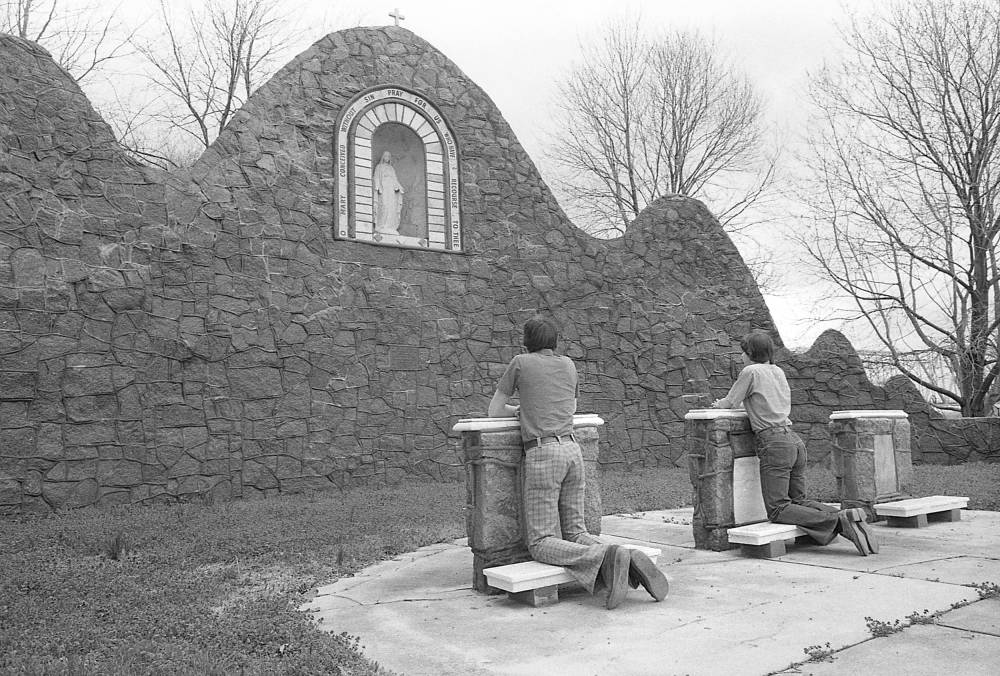 ABOVE: One of the many fixtures at St. Vincent's Seminary that draws its students forth is the shrine to the Virgin Mary. Praying at the shrine are Paul Payne of Joplin, Missouri and Richard Wehrmeyer of Metropolis, Illinois. BELOW: Leaving friends and the school itself will be difficult for students at St. Vincent's. The solitude that can be found on the seminary grounds sets it apart from most schools. Paul Payne and Richard Wehrmeyer sit on the stone boundary wall that stretches across the eastern edge of the school grounds, overlooking the Mississippi River. (Phil Nash photos) 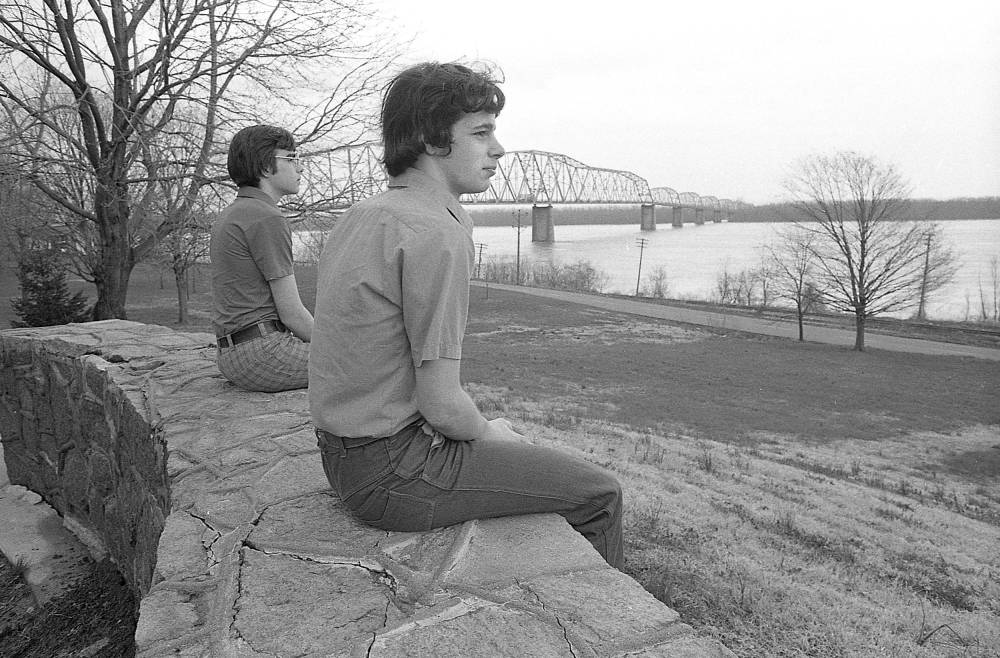 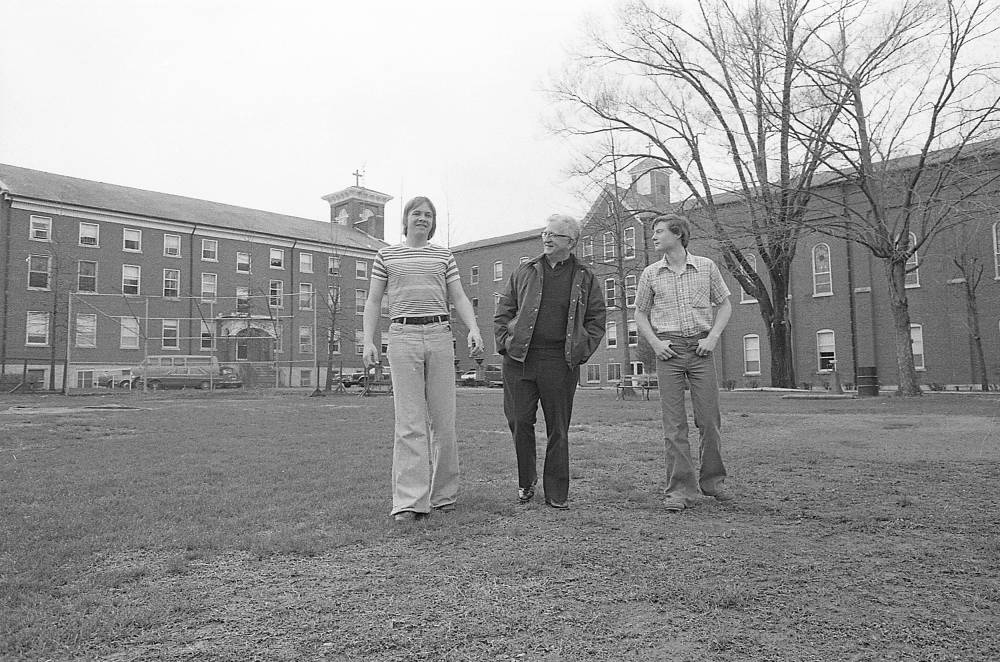 The closing of the seminary is not only affecting the present students, but also those who have graduated from the preparatory institution. Gary Mueller, Father Alphonse Hoernig, C.M., and Michael Lawless walk over the grounds of the century-old school. Father Hoernig, who is principal of the school, was a student at St. Vincent's from 1945-47. Mueller and Lawless will become members of St. Vincent's Seminary's last graduation class.

"It's a big disappointment not to get to graduate from St. Vincent's," says Paul Payne, a junior from Joplin, Missouri.

"I feel kinda hurt the place is closing down. I really looked forward to graduating from here," admits Bob Wortman, a junior from Kansas City, Kansas.

"St. Vincent's will always be special to me. Being from Denver, Colorado, I had many chances to go to other high schools very much closer to my home, but I came to Cape. Even though I graduate this year, I will always take a piece of St. Vincent's with me wherever I go," declares Mike Lawless, a senior.

These are some of the thoughts of the young men who are sharing in the end of St. Vincent's Seminary, also known as St. Vincent's College and as "The Cape," which for 136 years has served the Vincentian Order, Congregation of the Mission, at various educational levels. In recent years, it has served as a high school for young men considering the priestly vocation or desiring prestigious Catholic education.

It has been many weeks since formal announcement was made Jan. 21 of the decision to close St. Vincent's as a high school (the ancient building will serve other purposes), and there is an air of acceptance of the inevitable, but as the year draws to its close, students tend to reflect on what "The Cape" has meant to them.

There were tears the day the closing announcement was made, and juniors in particular still feel a special impact.

Chris Sherry of Ripley, Tennessee, ponders, "The biggest thing I guess I feel is the confusion. I've been here since my freshman year. I thought I could wait until my senior year to make up my mind about the vocation, and now it's just kind of up in the air...."

Some of the young men will transfer to the St. Vincent de Paul Seminary at Lemont, Illinois, (in the Chicago area), which is similar to "The Cape," while others will attend different seminaries or high schools nearer their homes.

David Berning of Florissant, Missouri comments, "Well, I'm in my junior year now and next year at Lemont I'm afraid all my senior privileges will be taken away. But Lemont should be a good academic experience."

Bobby Bell of Marion, Arkansas, says, "Well I had to convince my mom to let me come here in the first place. I really wanted to, and I was looking forward to graduating here.... Probably I'll go back home to finish high school. "I've had so much work here I'll probably only need to take a couple of classes to finish my credits."

Waxing philosophic, John Westerfield of Metropolis, Illinois, says, "Of course it came as a shock to all of us. We'll lose some good friends, leaving here, but it's just another stage of life; we just have to accept it."

On the other hand, there's Vernon Kemper of Festus, Missouri, who maintains, "It wasn't as much a shock to me because I had planned not to come back next year. But I have put down roots here and I will miss my friends. My family has moved since I came here, so I'll be going to a completely strange high school."

Greg Clements of Lamar, Missouri, who is a diocesan student rather than a Vincentian, admits, "The main thing, when I first heard they were closing the school, I felt ripped off...but I guess it had to happen, with the loss of enrollment. I'll be going to St. Thomas at Hannibal, run by the Springfield-Cape Girardeau diocese."

"This has always been such a good school; we're proud of it here," says Greg Hakenwerth of Wentzville, Missouri. "The faculty insists on good study habits, and the way students relate to each other is special. I guess I'll probably go to public school at home, but I'll sure miss St. Vincent's."

Kevin Wells of Cape Girardeau says, "I'll probably go to Lemont, but there are some things you just can't take with you. Just now I'm unable to imagine not being at St. Vincent's."

"I'll also be going to Lemont," says Nick Malawey of Ferguson, Missouri. "I felt a lot of confusion at first but now I feel better about it."

As the juniors talk among themselves, the warmth of shared problems and pranks is evident, as well as the appreciation of the caliber of education they've received. "I really wanted to graduate from St. Vincent's," one says, "because it's got such a good academic reputation. It would help me get a better job."

Another says, "I would like to keep my good study habits, but I'm afraid there won't be anyone at home to really make me stay at it. I need someone to keep me in line."

Seniors, members of this last graduating class, have special feelings about the old school.

Joe Bielski of Springfield, Missouri thinks "that the community spirit here at St. Vincent's will be the thing that I can look back upon. Living with the same people 24 yours a day can really get to you, but we each seem to take that into account when dealing with each other."

Rich Wehrmeyer of Metropolis, Illinois, finds "the most impressive factor that I have witnessed in my four years as a student at St. Vincent's College is the unceasing tradition.... This tradition has been the spark of our spirit and our closeness."

Mike Dublinski of Piedmont, Missouri, says, "The thing I treasure most is my study habits. Here the teachers enforce school work daily and get us used to college work and pressure. They are always trying to help us, giving us suggestions on how to improve our studies."

"I'm always eager to get back and meet my friends and start a new year, but now that I'm graduating, and in a sense the whole school is 'graduating,' I won't be able to come back as a student. That will be hard to adjust to."

Mark Thompson of Holton, Kansas, finds "the great intimacy and comradeship among the students its most memorable quality. All the problems which arise among adolescents are present here, and sometimes in greater intensity than in other schools, but the spirit and unity of the school as a whole has never failed."

"The greatest memory I'll have of St. Vincent's will be the closeness found between the students and the faculty.... I am grateful for all the help, understanding, and education which I have received here," says Jim Brady of Chesterfield, Missouri.

Steve Sipp of St. Louis notes, "'The Cape' has many aspects of growth and recreation which give us a happy outlook on the times we've spent here.... This place is filled with jovialness, happiness, and a sense of direction or channel of enthusiasm...."

David Samuel John Hepko of Branson, Missouri, declares, "Cape has made me a better person -- mainly through things I never know I had the ability to do. The faculty, priests, and students have been the greatest influence...."

Gary Mueller of St. Louis muses, "Cape has left me with many fond memories of the beauty and majesty of the building and its grounds, of the spirit of the students that could never be kept down, of the friendships I have made here that will never be forgotten, of the quiet helpfulness of the priests in times of trouble...."

Dan Werley of Fort Smith, Arkansas, says, " One of the most memorable things about Cape to me is the accent of spirituallity. The chapel, although not large or highly ornamented, gives me a real feeling of the presence of God.... All in all, St. Vincent's-Cape is a small pocket of humanity where a person learns to grow."

And Ron Hoye of Ste. Genevieve, Missouri, puts into words what many of the young men -- and their elders -- feel: "There will always be a special place in my heart for 'The Cape.' I hope and pray that someday this 136-year-old institution will be re-opened as a high school seminary to give others, as myself, a chance to see the priesthood, and to grow."