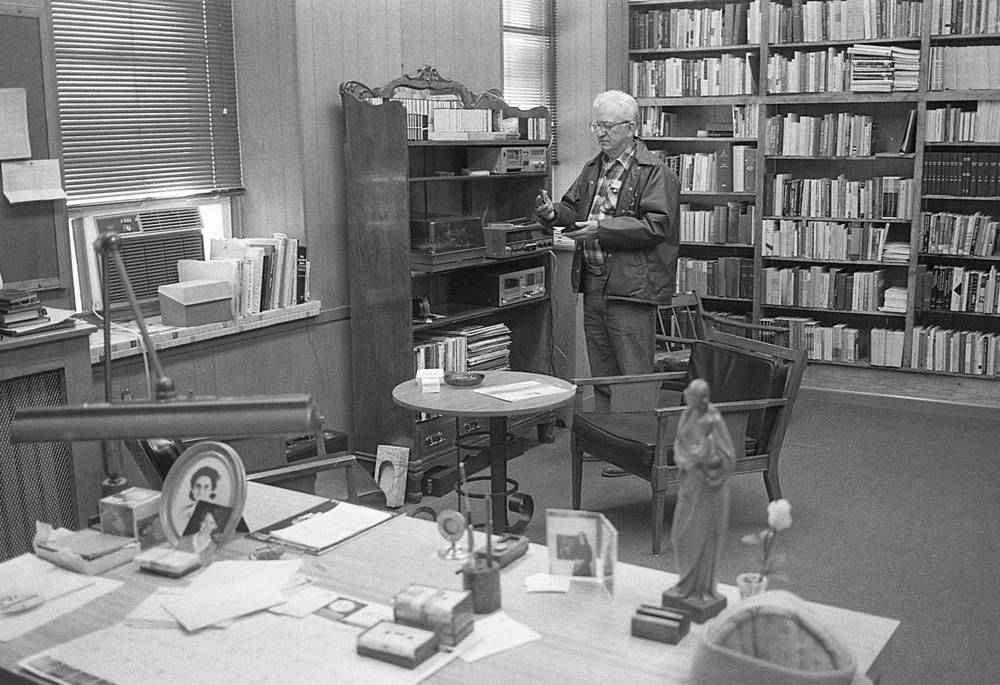 The Rev. Alphonse Hoernig, C.M., director of the Evangelization Center, formerly St. Vincent's Seminary, stands in the midst of a busy retreat office at the center. Below, a new carport will protect residents of the center and visitors from inclement weather. Bottom photo: This is one of the 26 individual rooms made from the large open dormitories, which until three years ago, housed young men preparing for the priesthood. See story below. (Fred Lynch photos) 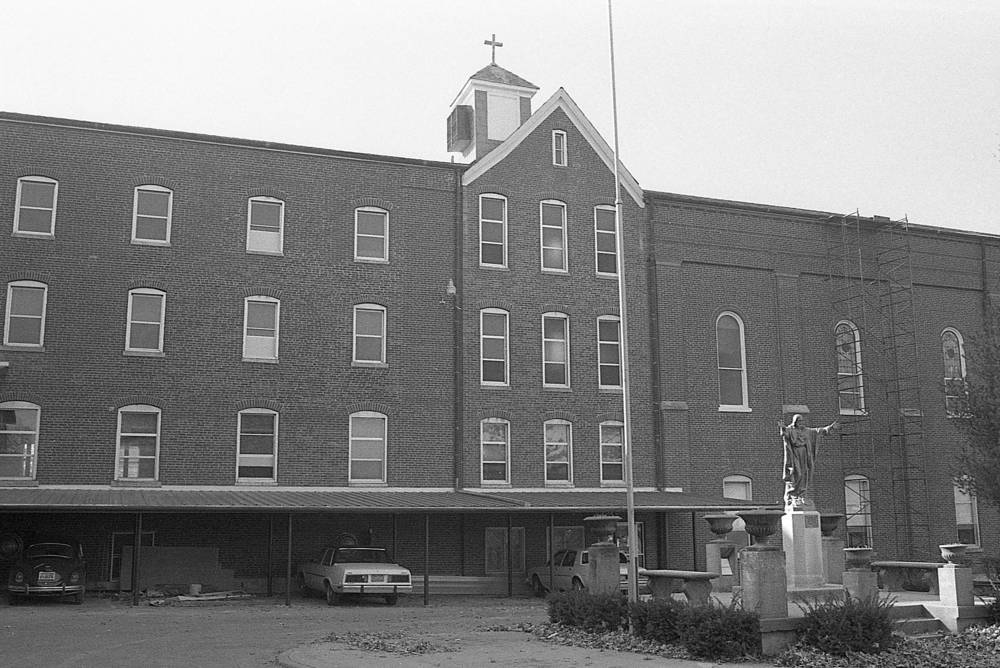 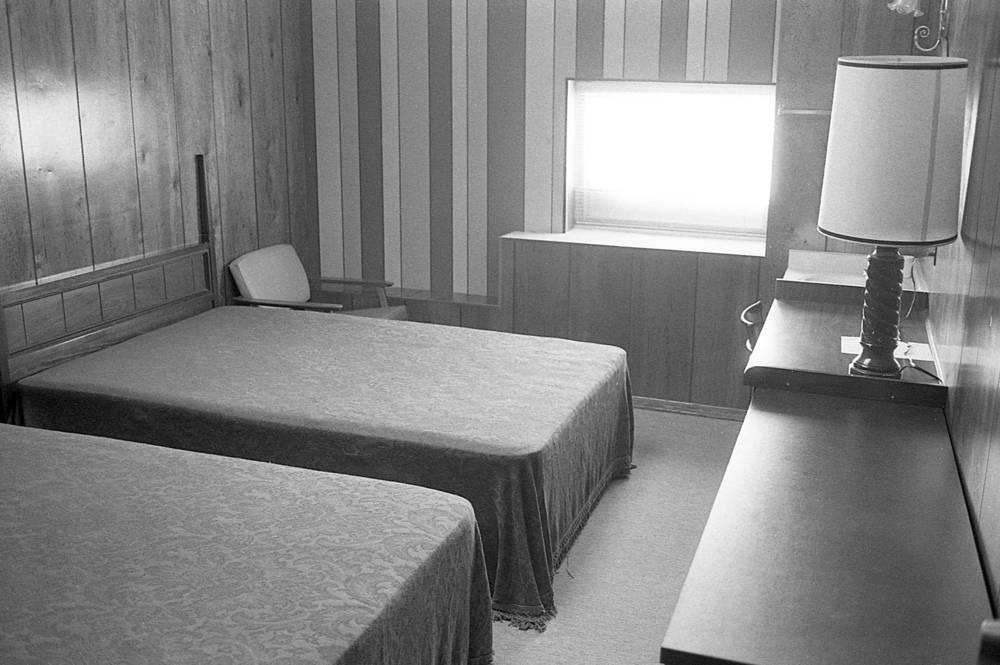 Ice on the steps no longer poses a threat to the safety of priests as they leave the center at all hours to make calls, or to visitors to the Evangelization Center.

A carport, the last of the planned renovations at the center, formerly St. Vincent's Seminary, is being completed this week.

According to the Rev. Alphonse G. Hoernig, C.M., director of the Evangelization Center and diocesan director of Cursillo, renovations that have spanned two years have been very successful and have helped make the transition from seminary to evangelization center much easier.

"We wanted to make the center accessible and comfortable year-around, and I think we have done that," Father Hoernig said this week. "We also have created a place that people from all walks and religions can come to."

The physical change of the building began to take place in 1980, a year after the seminary was closed. During 1979, meetings and retreats were observed, Father Hoernig said, to see what changes should be made.

"It took a lot of planning to make sure we would get the most benefit out of the renovations," the director said, adding that the seminary had stood on the grounds for many years as a place for young men to prepare for the priesthood. "We had to make it functional for singles, couples, all who might need the facility," Father Hoernig said.

The seminary was staffed for many years by the Vincentian fathers who founded the school in 1838. Actually, education offered by the institution was continuous and varied. It has served as a Secular Classical College, Ecclesiastical College ordaining for the Archbishop of St. Louis and suffragan bishops; as a Minor Seminary for Archdiocese of St. Louis; Commercial Preparatory School and a Minor Seminary for Western Province of Congregation of the Mission.

"We have changed the image of the seminary," Father Hoernig said, "but we have retained the peace, the places for meditation, and the fellowship that has always been a part of the school, now center."

The campus of the center occupies a prominence which overlooks the Mississippi River. The cornerstone for the first building, a three-story brick edifice, was laid in 1840. Many additions over the years have been made, and in the past two years, several major changes have been seen.

The roof was repaired, new gutters installed, the entire building, including the dining area and gymnasium have been air-conditioned; the large 36x78 dorm rooms have been divided into 13 attractive rooms on the second and the third floors; and a multi-carport has been built, sheltering persons as they enter and leave the building.

A large number of persons use the center annually for Marriage Encounter weekends, Cursillo, Catholic youth, etc. Many parish missions are planned at the center and some conducted there, with many conducted in other parishes. Priests of the area hold retreats here and several times a year, sisters have their Days of Recollection at the center. Even grade school youths are brought to the center for a day of retreat. The Diocesan Council of Catholic Women have held numerous meetings at the center the past two years.

Several priests and workers are stationed at the center in addition to Father Hoernig. The are: the Rev. Clarence Bogetto, C.M., chaplain at Southeast Missouri Hospital and in charge of food at the center, who also serves as chaplain of the Blytheville Air Force Base; the Rev. John P. Tackaberry, C.M., treasurer at the center and chaplain at Saint Francis Medical Center; the Rev. Anthony J. Falanga, C.M., director of retreats; the Rev. Donald Berkbigler, C.M., in charge of parish missions; the Rev. Frank Crowley, C.M., missionary for parish missions; Brother James Paprocki, guest master, who welcomes guests and conducts tours of the center; Sister Ellen McRedmon, D.C., who resides at the convent at St. Vincent's Grade School; Pat Kelly, secretary; Jake Copeland, cook; Mabel Little, second cook; Walter Berkbigler, maintenance and grounds keeper.

The staff and the center are busy on weekends, but Father Hoernig stressed that several days are open for meetings in the numerous rooms. Groups may bring in their own speaker, he stressed. Reservations may be made by contacting the center secretary.

"Our busiest time is during the fall, about a couple of weeks ago, when the hard maples were at their prettiest. People just seem to like to be here and wander the grounds," Father Hoernig said.