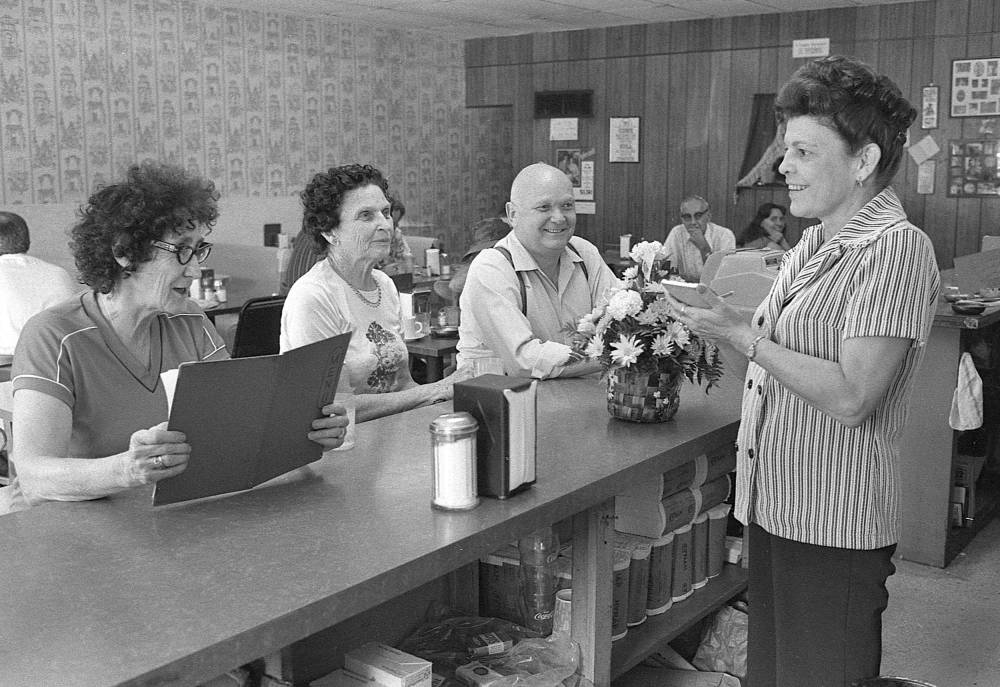 Mable Grissom has been in the kitchen a lot of years, and on Thursday she observed her 21st anniversary in the restaurant business in Chaffee, Missouri. Here, she chats with customers, from left, Dora Rister, Bernice Montgomery and Jim Stubbs, all of Chaffee. At Mable's Cafe, Grissom says, "the gift of gab goes a long way with home cooking." (Fred Lynch photo)

CHAFFEE - When she was 9 years old, Mable Grissom would pull a chair over to the stove in her mother's kitchen, climb on it and stir the ham and beans simmering there.

She hasn't stopped cooking since.

"I was one of 13 children," Grissom recalls. "I'd mind the younger children while mama picked cotton, and I'd do a lot of the cooking, too."

For the past 21 years, Grissom, along with rearing four children, has owned and operated Mable's Cafe here. Thursday, she marked both her anniversary and the opening of a spanking new dining room that her husband, Charles, an electrician and plumber here, built for her.

That anniversary was a time for Grissom to look back on her years in the kitchen -- 38 to be exact -- and talk about the business of keeping other people pleasantly full with what she describes as "plain old country cookin'."

Prior to opening her own cafe, Grissom worked for other restaurants. It was longtime customers, she says, who persuaded her not to hang up her apron when one restaurant closed, but instead to open one herself.

It's cooking that rates as Grissom's first love. "Something in my mind tells me when to stop seasoning," she says. "I never use recipes. I don't even have any. If you go by a recipe, well to me that's just not home cooking."

Five days a week, Mable's remains open 24 hours. And even though Grissom may not be at the cafe, it doesn't mean she won't be rousted in the middle of the night.

"Sure, sometimes I've wondered if it's worth it. It's hard work. But then I think about all the friends I've made through the years. And it is worth it."

Grissom surely must hold a record of some sort in steady customers. One, Frank Stidham, has not missed a day eating at Mable's in 38 years.

"Most of my customers are just one big happy (hungry, too) family," she says. "If a regular customer doesn't come in, I send and see about them."

And they, in turn, care about Mable. Stidham, "Uncle Frank" to Grissom, "notices a broken chair or something, and he takes it home to fix. I've got some really great friends here," she says.

She notes with pride that her first customer in 1958, Dick Steimle, is still eating her barbecued ribs and chicken and such.

Grissom says she has never taken a real vacation in 21 years. "I still work seven days a week. Oh, I take off some -- maybe a weekend every three months or so."

Grissom's philosophy is that "the gift of gab goes a long way with the cooking." That it does. Thursday, she says, "was like a party. I got flowers and presents from a lot of the regulars. And I'll tell you, I didn't feel a bit like 52 when I got off at 10 last night."

Perhaps the ultimate compliment to Mable's and to the Mable who runs it is "that so many people say the town just wouldn't seem right without Mable's," Grissom notes. "You know, that means a lot to me." 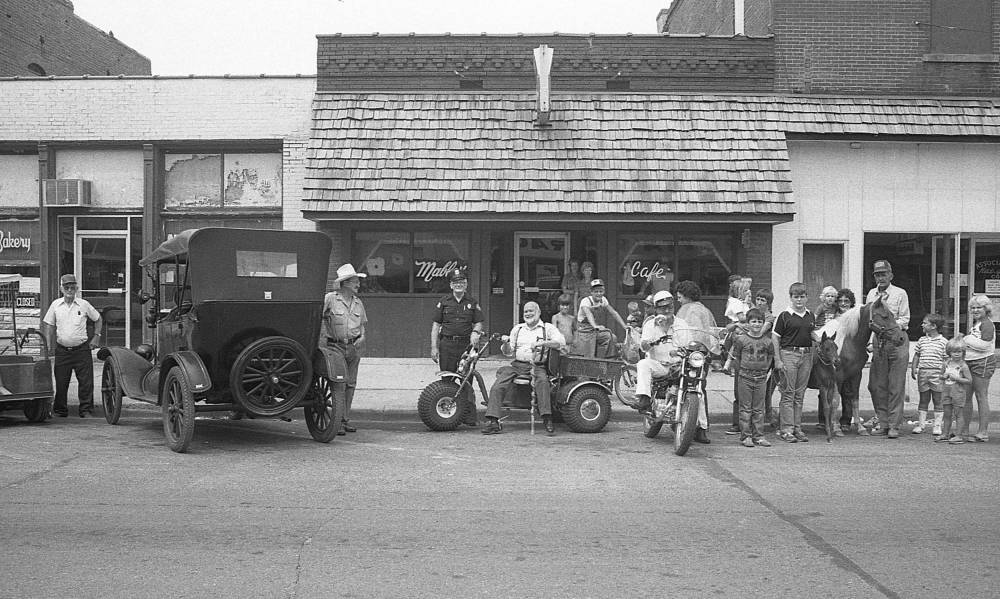 Published Aug. 7, 1983. Mable's Cafe in Chaffee is celebrating 25 years of service this month. That, in itself, isn't so unusual, but Mable's clientele is. They come on about every form of transportation around--some several times a day--and they all showed up Friday for a get-together and group picture. From left, they are: Fred J. Seyer, 83, of Chaffee, standing next to his golf cart; C.H. Duncan, 65, Chaffee, standing by the Model T automobile; Chaffee Police Chief Chet McCain; James M. Stubbs, 56, Chaffee, in the three-wheeler; Kenneth Youngman, 73, Oran, on the motorcycle; Robbie and J.P. Montgomery, 11 and 7, respectively, of Chaffee, standing to the viewer's left of the horses; Paul Montgomery, 67, Chaffee, standing to the viewer's right of the horses; Shirley Kitchen, 41, a waitress at the cafe, and Jimmy Hargrove, 4, standing behind the horses. (Randy Lilleston ~ Southeast Missourian archive)