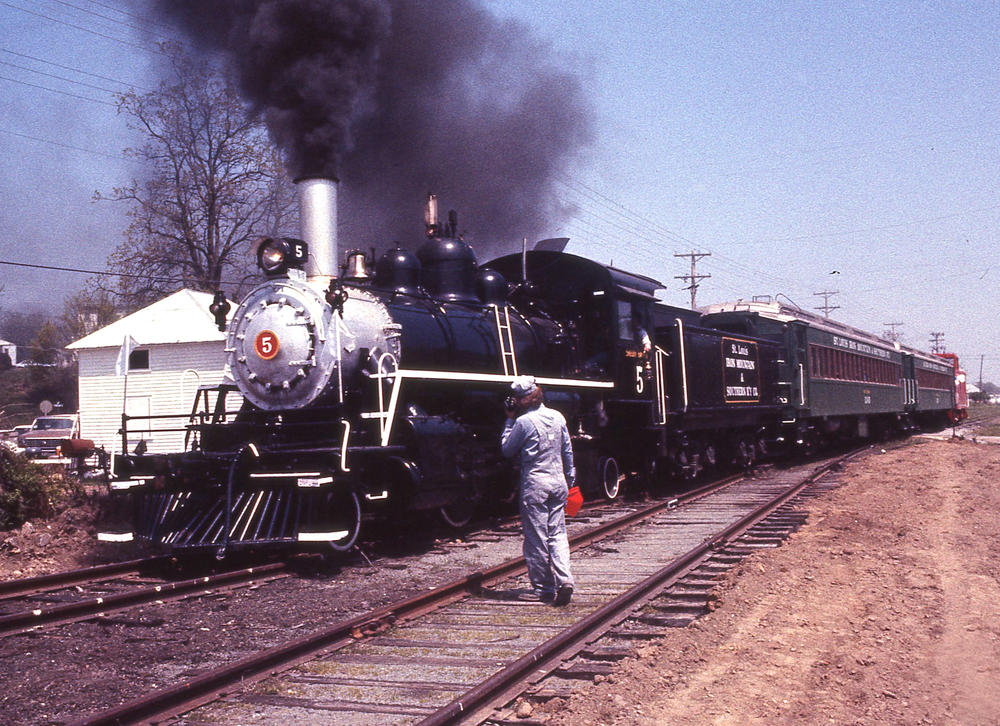 The St. Louis, Iron Mountain & Southern Railway steam-operated tourist train chugs away from Jackson on its inaugural run to Gordonville Friday with dignitaries and special guests aboard. The train will make regular trips to Gordonville, Dutchtown and Delta throughout the year. (Mark Bliss photos) 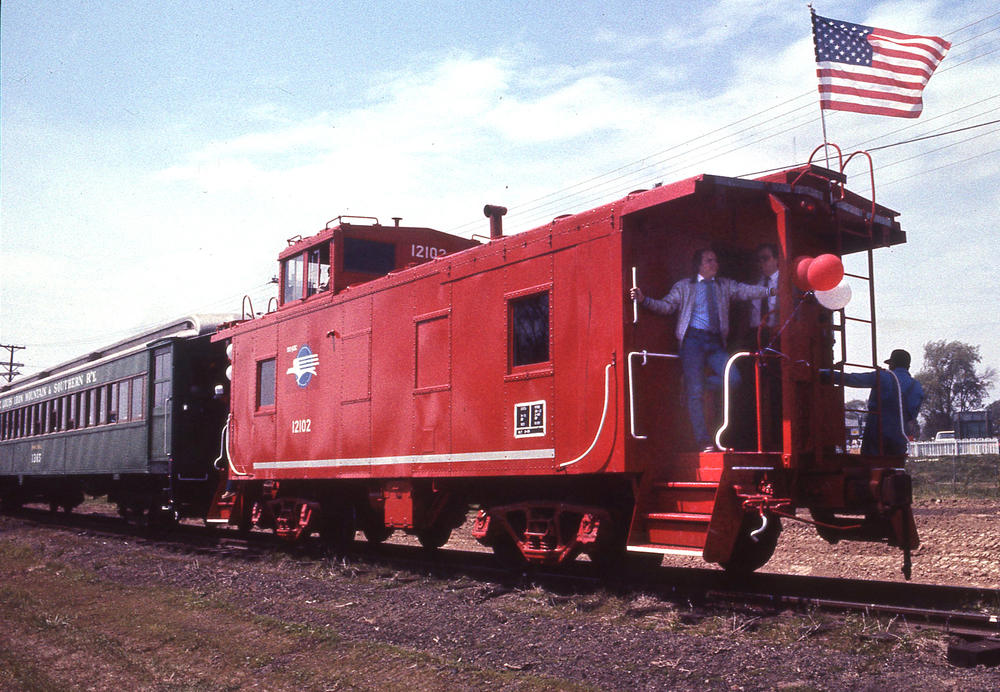 Tourist train offers trip into past

Like a scene from the past, the St. Louis, Iron Mountain and Southern Railway, with a puff of smoke, chugged away from Jackson Friday morning on its inaugural run to Gordonville.

Officials and guests, who filled the train's two coach cars, waved good-byes to those left standing at the station as guest fireman and engineer, 8th District U.S. Rep. Bill Emerson, shoveled coal into the engine.

The familiar-sounding whistle gives two short blasts warning the train is about to pull away on its way to Gordonville, through Dutchtown or on through to Delta. Then, with a sudden lurch, the wheels begin moving. It is the beginning of a voyage into the past and the passengers, including this one, are overcome with the romanticism and mystery of railroading as they are taken back to the days when steam was king.

John Lorberg, president and chief executive officer of the railroad, said he feels the area's first steam tourist railroad will be a success because of the fascination people have with trains.

"Old people seem to remember trains and the young people have never seen the trains," he said. "I think everyone had a really good time."

Leaving the siding at the intersection of Highways 25 and 61 in Jackson, the train slowly makes its way into an era when life was a little slower.

In contrast to today's fast-moving trains, airplanes and cars, the train makes a leisurely trip through the countryside, giving passengers the rare opportunity to just slow down a bit, and remember days gone by.

"Each time the whistle blows it means something to someone; we're not just playing around," said R.T. Hughes, a retired engineer who had worked 45 years before retiring to Cape Girardeau. "Of course, sometimes we're just whistling at a pretty girl."

Hughes was on board Friday to help engineer John Hall run the train. Hall, also of Cape Girardeau, had the responsibility of actually restoring the 1946-model locomotive, stripping away the boiler and firebox to completely refurbish Engine Number 5.

Added to the locomotive were two 1920s-era coach cars and a bright red caboose in mint condition, Hall said.

On the inaugural run, Hall said the train had a few minor problems. But with time--and help from experienced railroad men like Hughes--all the bugs will be worked out, Hall said.

On this trip, the train ran out of steam because the fireman was unable to shovel enough coal in to the fire. But unconcerned passengers enjoyed the unscheduled stop along the route.

"There's not a problem if you run out of steam," fireman Oliver Groseclose said. "You just have to shovel more coal."

The huge coal fire must be started two hours before the trip in order to get the train warmed up, Groseclose explained. The fireman must continually shovel tons of coal into the firebox to keep water in the boiler hot enough to create steam for the engine.

On Friday's trip to Gordonville, old Number 5 burned between five and six tons of coal, he said.

Passengers have an opportunity to meet and talk with the engineer, fireman and conductor, and to inspect the huge steam engine before and after the trip.

The train travels at a clip of only about five or ten miles per hour, allowing passengers a good view of the passing countryside. The train will speed up to about 15 miles per hour, but according to Groseclose, "Fifteen miles an hour is really flying for us."

Hughes explained that each car, though connected, moves independently along the track. Watching from one car, the other car, engine and caboose gently roll back and forth, seemingly to different rhythms.

Past fields dotted with farms, the brightly painted train lumbers along. Cows watch with little interest as the train passes, and if not for an occasional power line or automobile, one could imagine they were traveling through the countryside of a century ago.

As the train gently rolls along, youngsters and oldsters alike might find themselves scanning the countryside, perhaps imagining train robbers riding horseback preparing to force the locomotive to a halt.

Purple, yellow and white wildflowers are abundant along the route at this time of year, and an alert and eager eye might spot some wildlife along the track. In addition to scores of birds, a black snake slithered along a freshly plowed field and a little raccoon peeked from inside a culvert near the track as Number 5 chugged towards home Friday.

"We still have a few bugs to work out," said Lorberg. "But I think things are working out very well. Everyone seem to enjoy the train, and that's what it's all about."

Tickets for train rides are available from the Jackson Chamber of Commerce. On Sundays, including today, the train will travel the 10-mile roundtrip from Jackson to Gordonville at 1 p.m. and again at 2:30 p.m. And, it will make a 36-mile trip to Delta at 4:30 p.m.

On Saturdays and holidays the train will make the Gordonville run at 8:30 a.m. and 3 p.m. and will travel to Delta at 10 a.m.

Tickets for the regular trips to Gordonville are $5 and to Delta $10. Children under 4 years ride free. Charter and tour group rates are available, as are box lunches.