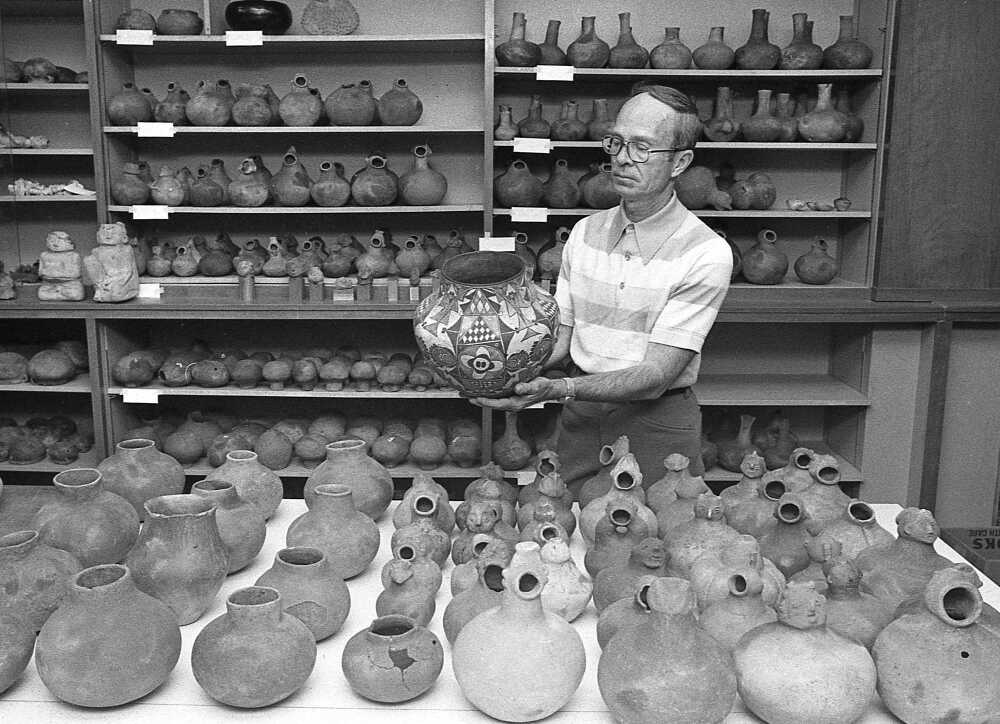 James V. Parker, employed by SEMO State University last month as a consultant for establishing a permanent campus museum, is surrounded by ancient pottery he is cataloging. So far he has identified more than 1,400 objects. Mr. Parker returned to Cape Girardeau from Phoenix, Arizona, where he was associated with a museum. (Fred Lynch photo)

James V. Parker, employed last month by SEMO State University as a consultant in an effort to establish a permanent campus museum, is now ensconced in Memorial Hall, surrounded by a variety of objects he is attempting to identify and catalog.

In a pottery-filled downstairs room that once was the Co-op Store, Mr. Parker is sorting out various university-owned collections. The main object of his first study is the Beckwith collection of Indian artifacts.

Present plans are for cataloging the collection to determine exactly what the university has. Mr. Parker, who came back to Cape Girardeau and his alma mater from Phoenix, Arizona, where he was associated with a museum, is renumbering the fragile pieces to properly identify and permanently record them.

Location of the collection in Memorial Hall is only temporary. The room is simply a working laboratory for Mr. Parker until he completes the extensive identification work.

Mr. Parker envisions plans for a more appropriate display of the materials, but exactly where that will be is uncertain. He basically views the collection of Indian Mound Builder artifacts--considered by some to be the finest in existence--as a valuable research and educational resource.

One point he wishes to make clear, however, is that there are no plans to remove the collection from the university. It will be housed somewhere on the campus once space is made available.

It is obvious as the study moves forward that some foreign pieces have crept into the collection over the years. For example, gifts of several Hopi artifacts and even Central American pieces are in the collection. These will be segregated.

The Beckwith collection was a gift to the university in 1913 of Thomas Beckwith of Charleston who spent 40 years in uncovering and labeling the materials to the best of his knowledge. The collection contains some rare pieces and examples of a culture that can be found nowhere else.

Other gifts over the years which may be incorporated into a museum include a collection of firearms which has been stored in boxes at various locations in the school. These, too, must be cataloged.

Mr. Parker expects that other gifts will be discovered as his survey of university historical resources continues. He then will be in a position to make further arrangements for their proper display so they may be better studied by students, faculty and the public.

When James V. Parker reflects back nine years ago, he smiles.

"It was like an Easter egg hunt which became a treasure hunt because of what we found," he recalled.

Parker, director of the SEMO University Museum, scoured the campus for collections and historic items which were scattered during the institution's years of expansion.

And then, nine years ago Monday, he opened the doors of the museum.

"The opening was chaotic, but very rewarding. From scratch, we prepared an entire museum for opening in one month," he explained.

Through the years, Parker has led the museum to continued growth and development. In 1985, the museum is anticipating a record number of visitors.

"We're anticipating about 8,000 visitors this year, compared to about 6,000 last year," said Parker. Much of the increase is due to the fact that passengers from the Mississippi Queen and Delta Queen steamboats visit the museum as part of their city tour.

Monday, the museum held an open house for its newest show and to mark its anniversary. The annual poinsettia sale, which began Monday, will continue until all are sold.

The poinsettias were grown by students in the SEMO Horticulture Club, under the direction of Dr. Charles Korns.

Parker feels the museum has come a far way since its hectic opening nine years ago. Two student workers, Dennis Kogge and John Selph, assisted the museum director in preparing for the opening.

"Technically, I was hired by Dr. (Robert) Leestamper with no promises of a museum. I was living in Arizona at the time, and my initial role was to come back to Cape and search the entire campus for collections that had been scattered over the years," he explains.

Since some of the collections had never ben cataloged, there was little direction on exactly what had to be found. But Parker recalled some of the exhibits from 1943, when he worked as a student helper at the campus museum in Kent Library.

"I'm not sure when the museum closed, but for many years there just wasn't one on campus, and the collections went here and there," he noted.

Parker said one of his biggest pleasures was bringing the Houck statuary back under one roof. Many of the pieces were badly in need of repair, which the museum staff coordinated.

Once the SEMO Board of Regents provided the green light for a museum to be re-established in the mid-70s, the search was on for a suitable home.

"The only structure of the size available was in the ballroom of the old university center which was the old Memorial Hall," he continued. My goal was to transform the ballroom to a professional, environmental museum presentation."

However, the museum has outgrown its present space and is in need of added room for storage, research and presentation, said Parker. He hopes this is a goal which can be realized in the near future.

"I've turned down some major collections throughout the years because we've had no place to put them," he noted.

The current museum collection includes literally thousands of pieces, which are all cataloged, said the director with pride.

"Through the nine years, I've been very privileged to work with some very fine students through internships or paid student positions," said Parker.

The students were able to draw on the Cape Girardeau native's 28 years of experience with the Heard Museum of Primitive Art and Anthropology in Phoenix, Arizona, as well as his years at the SEMO museum.

Looking back over the last nine years, Parker recalls some favorite exhibits, including the Scandinavian Christmas, working with Jake Wells and "his fantastic watercolor exhibits," the Brodsky collection of William Faulkner materials, and the recent rural schoolhouses of Cape County display.

Parker also enjoys working with the various school groups which tour the museum each year, and he encourages more groups to do so.

"The past nine years has really been a challenge, but it's been a very rewarding experience, too," he added.

Read about the museum moving to the River Campus in 2007: