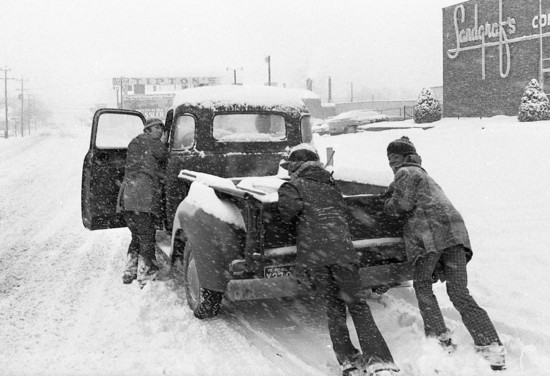 A pickup truck driver is helped after being stuck on Independence Street near the Louisiana Avenue intersection. Cape Girardeau received 15 inches of snow, the deepest measurement in the state. Below, a driver gets stuck in the 600 block of Broadway. (Fred Lynch photos) 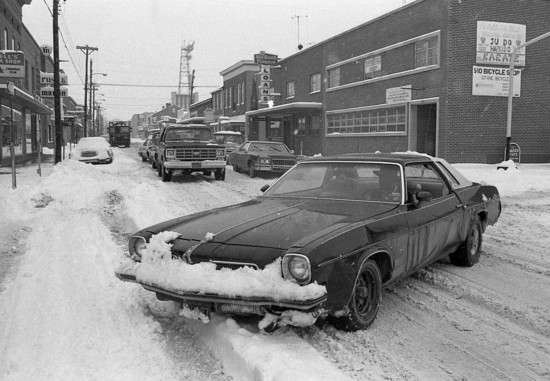 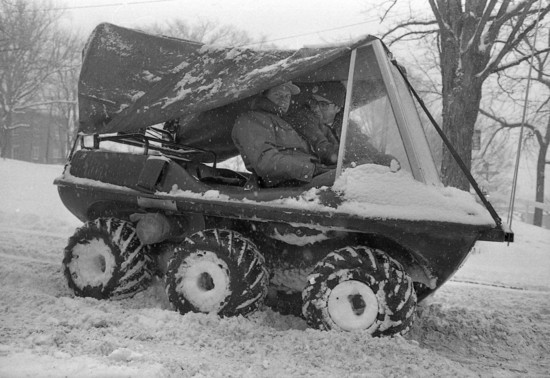 You can laugh at the snow and hold little concern about being stranded if you happen to have one of these all-terrain vehicles. The six-wheel contraption owned by C.A. Juden, Jr. can take most anything in stride. Mr. Juden has been ferrying friends around the city for the past few days in the ATV. Riding with him is Fred C. Springer. Below, a car is nearly buried by snow. 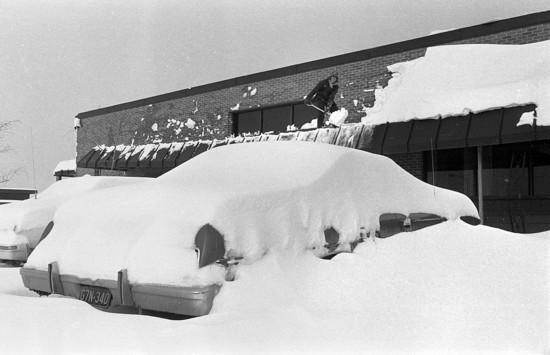 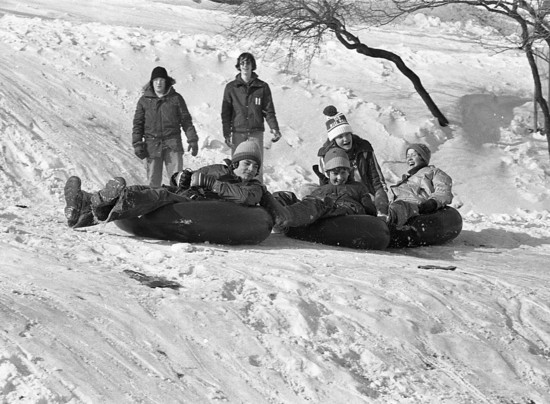 These youngsters make the most of a snow day from school on the terraces of Academic Hall at Southeast Missouri State University. The university was closed on Jan. 17 for the first time since 1904 because of weather.

The blizzard of 1917 was one for the city's history books. As one area farmer bluntly put it, some years later, "I ain't been thawed out since."

Approximately 15 inches of snow was on the ground here today and on Dec. 8, 1917, a snow blanket between 15 and 26 inches deep covered the area.

The blizzard began the afternoon of Dec. 7 continuing through the night. Level spots in the city were measured at 20 inches deep, and strong winds plowed snow into drifts of as much as six feet in some places.

The 1917 blizzard was the worst the area had seen since 1873. Snow remained on the ground all of December that year, and all of January.

There actually was more snow in January of 1918, although such a great amount as the Dec. 7 blizzard did not fall at one time.

In January 1918 a total of 35.7 inches of snow was recorded. Last January, there was a total snow accumulation of 21.4 inches. Matters were complicated by troubles at water, light and gas plants. The Mississippi River was blocked by ice, and news accounts said city water supplies were giving out, gas was turning to sulphur and lights were flickering on and off.

Part of the problem was blamed on an inferior coal supply. Much of the nation's supply of coal at that time was being funneled for military use during the waning days of World War I.

Residents described trees as "freezing, busting, splitting and emitting sounds like rifle shots" as the branches overladen with snow, cracked and gave way.

The method of road grading in those days was the use of horse power.

Throughout that winter, weather matters complicated normal lifestyles. By early February, ice jams had shoved out bridges in the south part of the county, leaving many residents virtually isolated.

Although a number of Southeast Missouri residents still relied on the horse as their main mode of transportation, many people had also by that time invested in new-fangled automobiles.

They, like most people out on the streets today, would have been better off with an old grey mare. Hundreds of automobiles in 1917 were reported stalled in deep drifts or fallen into ditches.

"Dobie Timbs' " train, the "Moose," had a difficult time getting through drifts on the Gulf track for Brooks' Junction of Cape Girardeau, newspapers reported. "Engineer Diersen hit her up for all he was worth and plowed through six and eight foot drifts," new accounts said.

Sikeston recorded 15 inches in that December storm. Malden had 24 inches, and Oran got 18 inches.

As the winter wore on, water became in increasingly short supply because of the frozen Mississippi. Weather hampered efforts to install a new intake pipe into the city water plant.

Water supplies were being taken from Sloan's Creek, described then as "an open sewer." Health officials warned residents to boil all water, fearing an outbreak of typhoid.

Many area residents recalled the blizzard for years to come, telling tales of walking along fence tops crusted with snow and ice.

Drifts on some country roads reached a depth of 14 feet. Later on the snow was covered by ice, and people skated for miles across fields.

Some farmers drove nails through the heels of their boots to gain traction on the ice.

Getting supplies to rural areas became a challenge. Teams of six to eight horses were hitched to single wagons in an attempt to get through the snow and into town for supplies. This continued through December and January until the spring thaw began at last.

One Fruitland farmer trudged two miles, breaking drifts to get to the family farm to feed cattle in the barn. The four-mile trip took from daylight until dark and had to be repeated daily for many weeks.

Since weather records have been kept at The Missourian bureau office at Jackson, the January of 1918 still takes the icicle as the most severe.

The coldest January day on record, though, occurred in 1930, when the temperature fell to minus 26.

Read the entire story with a link to pictures of the blizzard in this previous blog: