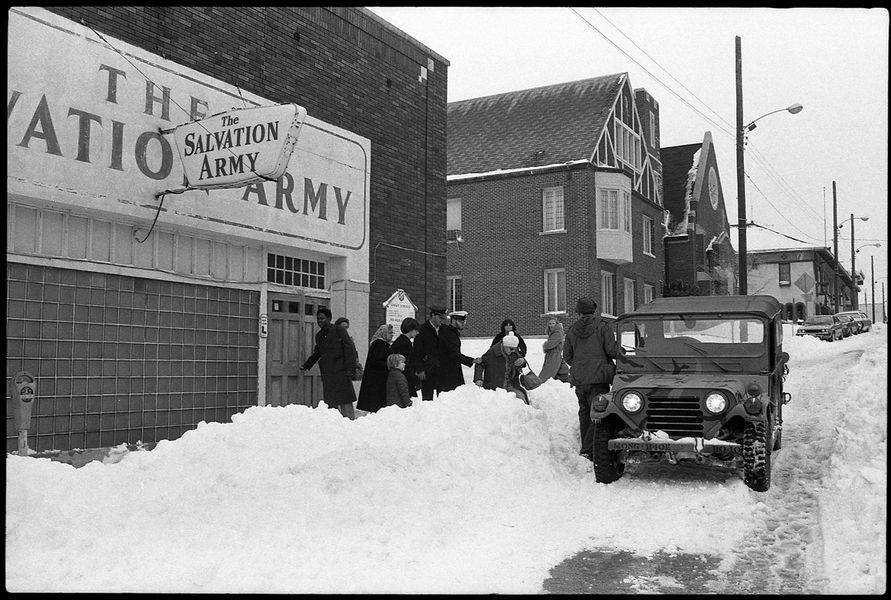 With recent temperatures above 100 degrees, we present a scene when two feet of snow fell in Cape Girardeau. The prediction by the National Weather Service was for rain, then one to two inches of snow with some sleet and freezing rain to occur.

The driver of a Greyhound bus and his five passengers, who rode out Sunday's blizzard in the bus after it stalled at Highway 61 and Route W, are loaded into a National Guard Jeep for a return to the bus after spending Monday night at the Salvation Army office in the 200 block of Broadway. (Fred Lynch photo)

The headline on the Feb. 27, 1979 issue of the Southeast Missourian was 3/4 inches tall and read: "New yardstick, blizzard of 1979." The entire front page was blizzard coverage.

Researchers and reporters, delving into the weather records hereafter will use this as their reference point -- and what a point it is. Never, at least in recorded city history, has there been anything like it.

Cape Girardeau is paralyzed. Nothing moves but emergency vehicles and a few with four-wheel drives authorized by police. All others are subject to arrest.

Grocery stores, doing a rush of walk-in business, are running out of bread, milk and other staples. Businesses are shut down. There are no burials -- the bodies are being held until the weather moderates.

Everywhere there are snowdrifts, man-made or nature-made. The man-made ones are a canyon down the streets, allowing one-way traffic for police and other emergency vehicles. The nature-made ones are drifts six and eight feet high. Cars are buried.

But what was it like when all of this came about?

Listen, posterity, here's the way it has been this winter, and on the day of the great blizzard.

It is the third year of the New Ice Age. Zero temperatures and below have been common each of these three winters. Snowfall is far above what it normally has been in the memory of anyone now alive. Last winter there was a 15-inch snowfall, but it was peanuts to what is outside right now.

On Dec. 7-8, 1978, there was a four-inch sleetstorm, starting as freezing rain on the night of Dec. 7, turning to sleet on Dec. 8 and continuing through a good part of the day.

A few scatterings of this sleet remained on the ground in deeply recessed areas when on New Year's morning, early, snow fell. That snow, augmented by others through January and February, stayed on the ground until it finally vanished (except for piles on parking lots) on Feb. 22, under 1.42 inches of rainfall with the temperature in the high 50s. The next day the temperature rose to 60 degrees. Rain amounted to 96 inches.

True enough, it rained Saturday night, a downpour driven on huge gusts of wind that whipped it into tiny, stinging projectiles. The Flight Service Station at Municipal Airport measured the rainfall at 1.12 inches up to midnight.

From midnight until 6 a.m., 1.27 inches of precipitation fell, snow and rain. The snow began sometime around 3 or 3:30 a.m., but by 6 o'clock measured only three inches.

By 6:30 everything had changed. The snow began falling in huge piles out of the darkening sky, blown on a towering wind that ranged from 20 to 30 miles per hour and gusted with increasing frequency up to 50 miles per hour.

Great skeins of snow, blowing horizontally at times, and at others slanting down in blinding torrents, made a huge whiteout. Vision was no more than 50 yards at times and rarely could trees 100 yards away be seen, then only dimly as through a veil.

On the south side of buildings the snow drifted, piled high by the raging wind as it whipped and sawed in ragged bursts driving the snow before it.

On roofs snow overhangs began to build, first one foot high, then two feet as the wind and blast of white continued on and on. Shrubs disappeared. Streets evened with the parkways and yards. The two became indistinguishable.

Cars mounded up like huge bumps and blobs at the curbside, obliterated by the snow piled against them in drift after drift. Those that moved could not see. Windshield wipers could not handle the snow volume. Unable to get to their destinations, they slowed and stopped.

Passage on streets became impossible, even for four-wheel drive vehicles. The stuff had piled so high that even they could not move. Snowplows bogged down. And the snow continued hour after hour, in those tremendous sheets out of the sky, slanting and blowing on the wings of the wind.

The birds of the air swing low and frantically searched for food to keep their body temperature up in the freezing wind.

We threw feed for them on our protected front porch. Tossed on the snow, it was obliterated in a minute's time. The birds began to come, cardinals, bluejays, juncoes, goldfinch, sparrows and the inevitable purple grackles, starlings and cowbirds--even a redwing blackbird.

At one time we counted more than 30 on the porch, moving about, scratching in the snow that drifted in for the sunflower and other seeds we had scattered.

One lone squirrel braved it across from Arena Park in the middle of the storm, but he too, soon gave it up when he found our feeders, which he and his friends regularly raid, were empty. It wasn't a fit day for squirrels, either, he decided.

The temperature hovered around 30 to 32 degrees. The snow was wet. The flakes ranged from small to fairly large, but not big feathery ones that sometimes fall in that range of temperature.

It was not until around 1 o'clock that the storm showed signs of abating. And even then, by comparison, it was a heavy snowstorm. Any other time it would have seemed so, but after what had fallen during the morning hours it seemed rather insignificant. Sometime after 3 it slowed even more and about 5:30 finally came to a halt.

So did everything else. No vehicle had moved on our street after 9 a.m., and the only track in the street was a trail carved by a few venturesome people who had walked down the middle. Until this morning only two vehicles had traveled the street, both heavy National Guard machines.

A trip outside measured drifts in the yard up to three feet, by yardstick, and 23 inches to 26 inches on the level ground. Except for the wind, all was silence. Only it moved.

And that's the way it was on the day of the Great Blizzard of 1979.