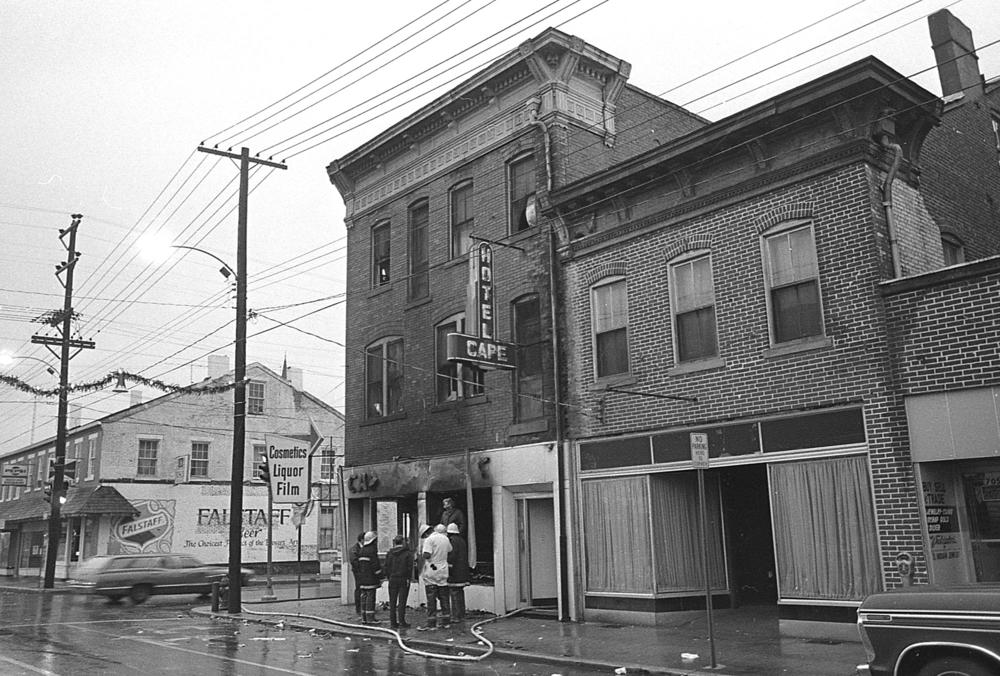 Fire severely damaged the Cape Hotel and the Cape Cut Rate drugstore beneath it at the southwest corner of Broadway and Sprigg street in Cape Girardeau. Fire reached into the second and third floors of the hotel, where firefighter Jim Niswonger, below, examines a room. The resident had tied a string of sheets to the bedpost in an attempt to escape the blaze. In bottom photo, broken glass and burned merchandise litter the charred drugstore. 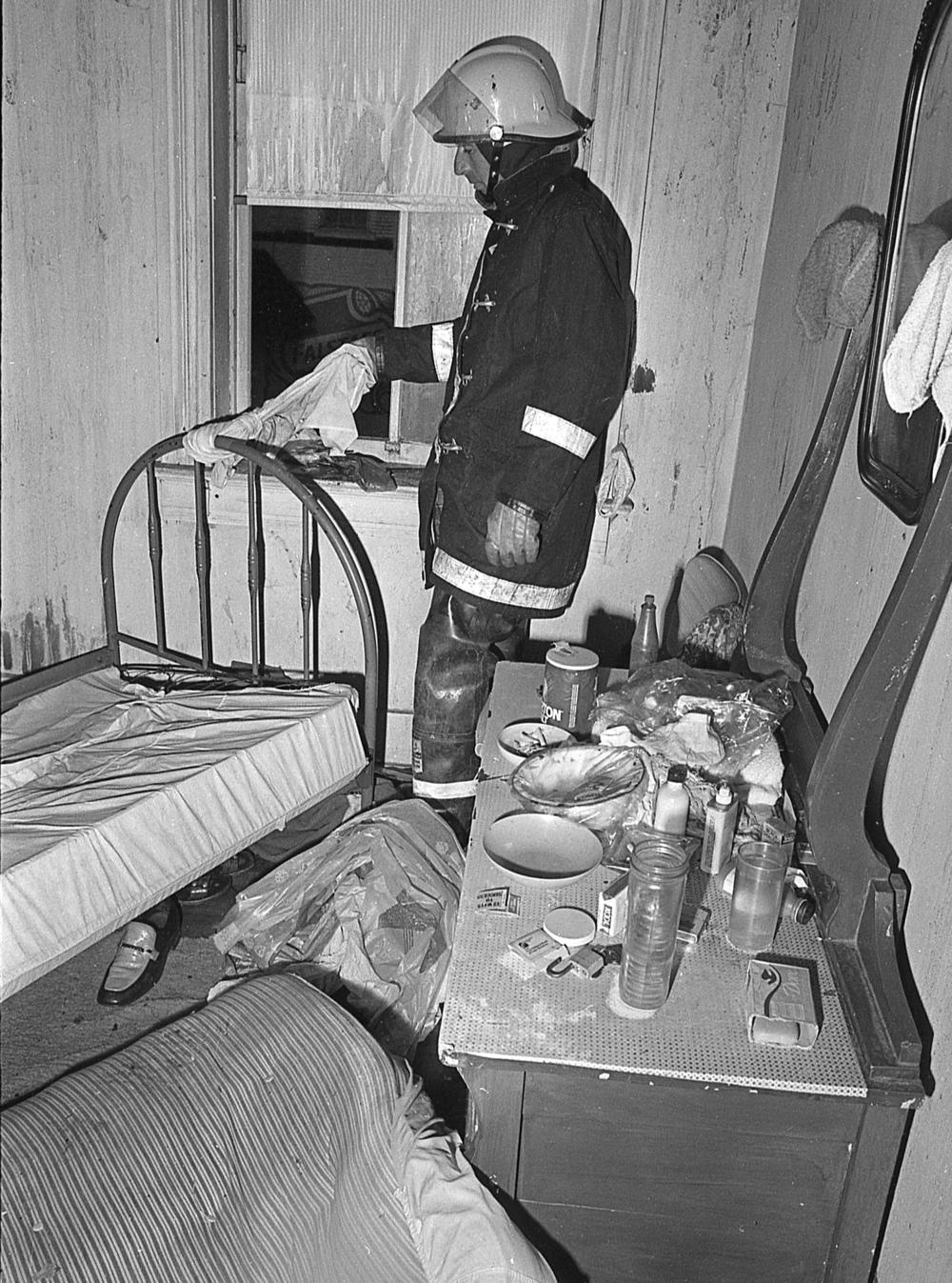 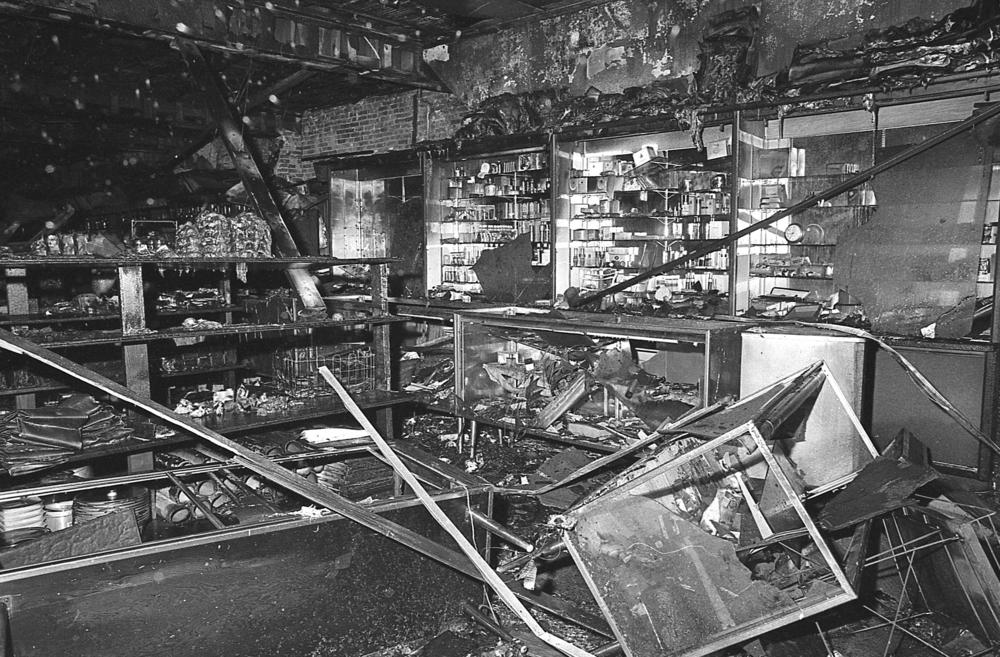 A fire that began near the furnace of the Cape Hotel, 701a Broadway, about 11:30 Thursday night raged for more than two hours as the Cape Girardeau Fire Department fought to control the blaze.

The hotel rooms sustained mostly smoke and water damage, but damage was severe to the Cape Cut Rate Store in the first floor of the building, as fire gutted it. The store is owned by Claude A. "Nip" Kelley.

Three stations responded to the call. With 28 off-duty firemen called in, 41 firemen in all rescued the hotel's residents and fought the blaze.

Although only two of the 20 or more residents of the hotel, most of whom were asleep at the time, were reported injured, seven firemen were treated at Saint Francis Medical Center for various injuries. One other fireman also was injured but did not require treatment.

Capt. Calvin Lynch was treated for smoke inhalation and is being held for observation, the fire department said. The other firemen were treated and released.

The fire had burned about 10 minutes before being discovered, said assistant chief Eugene Hindman, his right hand taped over the knuckled which were cut while attempting to pick out pieces of glass from a door he was opening. He received six stitches for the injury.

According to a hotel resident, Floyd Hand, the fire was reported by an unidentified young couple who were driving by the hotel. Mr. Hand, awakened by noise the couple made, said he saw the reflection of the fire in the windows across the street and that he "ran around and knocked on all the other doors."

He said a group of 10 to 15 residents then went out the back door.

The fire had gutted the first floor of the building, occupied by the drugstore, and heat from the blaze shattered the store's windows as firemen arrived.

One man was hanging from a second floor window with his legs wrapped around an illuminated sign, the fire department said. Other residents were leaning out of windows.

Chief Charles Mills said six or seven persons were evacuated from windows with the use of ladders within minutes after the fire department's arrival.

"After the initial six came out, we didn't find another one," Chief Mills said. Firemen searched all the rooms during which time Capt. Lynch was overcome with smoke.

Assistant Chief Hindman said the fire was under control by 2:30 a.m. This morning firemen were still on the scene, watching for hot spots that might again erupt into flames and helping residents who were returning to collect their belongings.

Several other residents were taken to relatives' homes and two were reported taken to Saint Francis Medical Center.

George Denney, owner of the hotel, estimated there were 17 residents living in the hotel, but that for an exact number he would "have to go through and count."

He described the residents as mostly older, working class persons and those on fixed incomes.

Although one resident rumored the fire started in a small Christmas tree in one of the windows, the fire department determined the blaze began around a vent pipe on the hotel's furnace.

"It could have been that something got against the pipe," Chief Mills said. "It didn't start in the window."

Chief Mills said the fire burned a hole through the ceiling above the first floor, burned through the second floor and extended to the third floor and charred the attic.

As residents returned to the scene, Chief Mills said the man who had been hanging from the light fixture returned for money he said he had hidden in a box in a boot in his room.

The boot and the money were recovered undamaged.