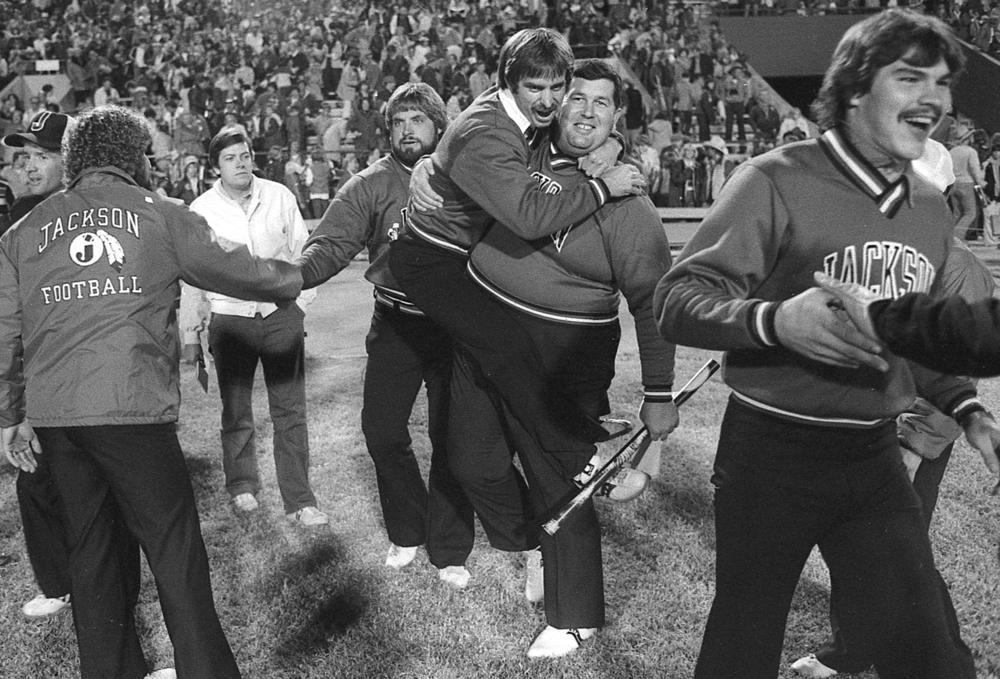 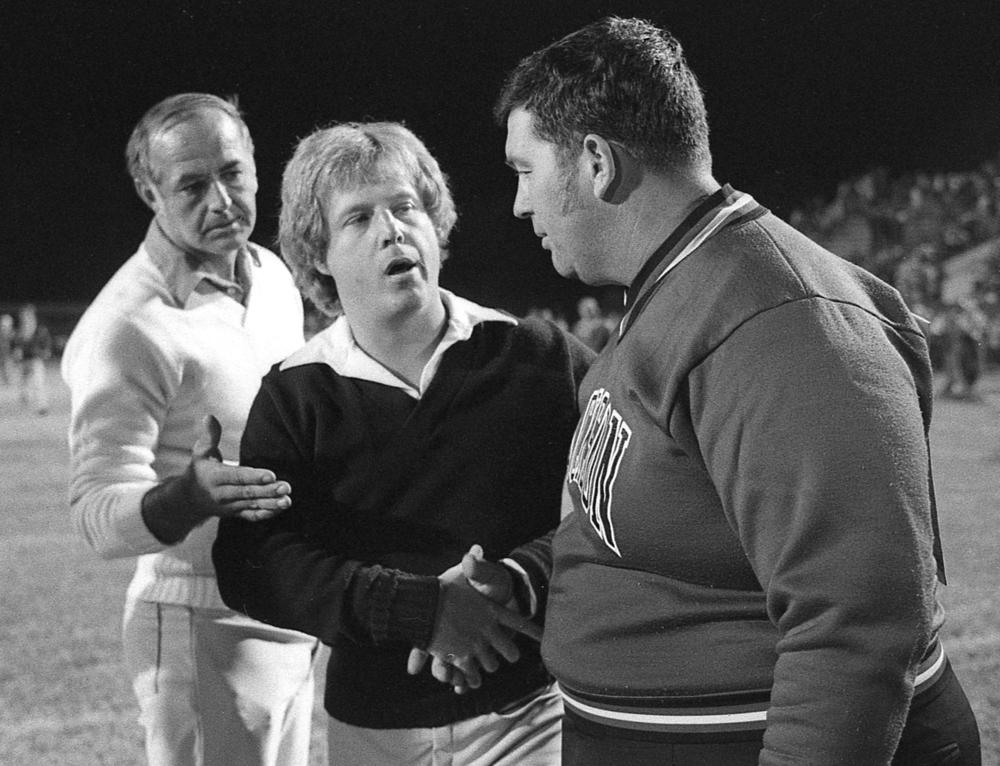 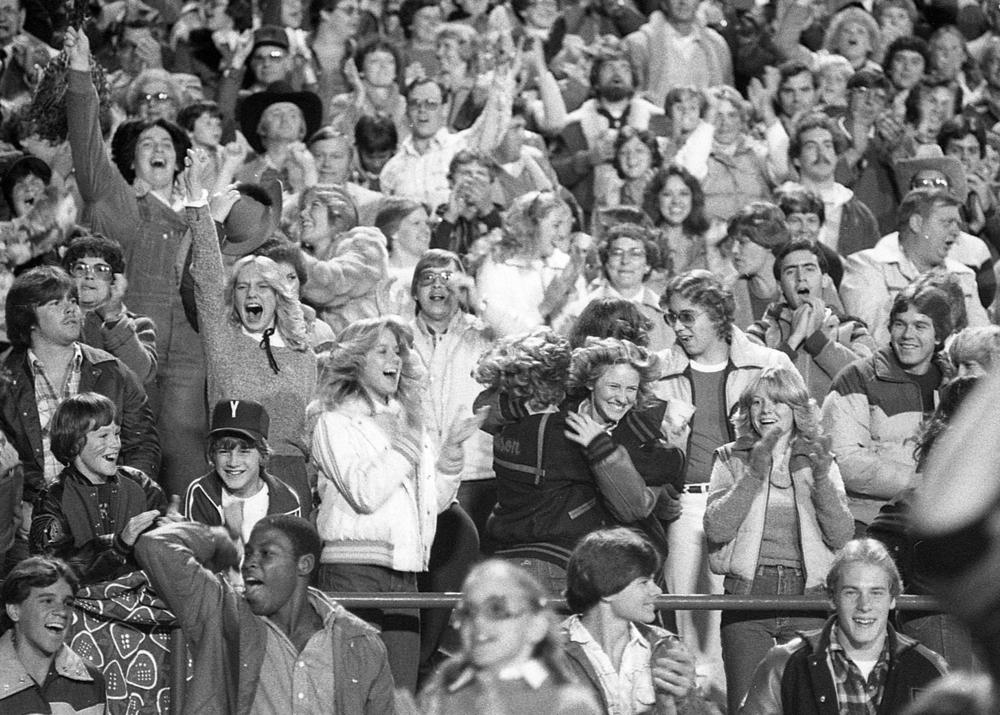 Jackson fans whoop it up in the stands at Houck Stadium as the Indians and the Tigers of Cape Central battled it out on the field.

Seasons come and seasons go and the score of the Jackson-Cape Central football game changes each year with them, but the one thing that remains the same, time after time, between the two are the crowds--always packed and boisterous.

Thursday's group at Houck Stadium was no different when the two rivals met in a SEMO Conference North Division battle. It mattered little though to the 8,500 or so fans that the game was a conference matchup. Or that Jackson entered the contest undefeated. Or even that Central had lost three straight entering the game.

All that was behind the teams and the fans when the game began. The only thing that mattered was that this was THE game. Bragging rights for a year.

And no matter who won the game, the crowd was going to be at least half happy and loud. Suffice to say the Jackson Indian fans were the loudest Thursday, as they watched their team easily handle Central, 22-3.

"It's just one game you always get up for," said Bob Lohman, a 35-year-old native of Jackson. "I don't think I've ever missed one. It's a big rivalry and always a good game."

"I don't miss a game," said Greg Gohn, 24, of Jackson, who played for the Indians' football team in 1973 as a tackle. "You know, go for a few beers after work before the game and then come here and watch Jackson win."

Twenty-five year-old Robin Burgfeld of Jackson is an oddity, however, when it comes to Jackson-Cape Central fans. Despite being a graduate of Central, Burgfeld roots for Jackson.

"I've always been for Jackson," said Burgfeld, who moved to Jackson from Cape Girardeau three years ago. "Even when I was going to school at Cape Central (1974), I think the rivalry was bigger then, though I can remember the day of the game, when you drove into Jackson or Cape you saw paintings of Tiger paws or Indians all over the town. You don't see that anymore.

"It is just not as big anymore," Burgfeld said. "When I was going to school there used to be fights and everything."

But walk two aisles to another section and the thought that the rivalry has tamed is absurd.

"There is nothing as big as this football game," said Gary Gray, a 16-year-old junior from Jackson High School. "It's a matter of pride. I think the rivalry has increased. The violence has calmed down some from the past, but the rivalry is certainly bigger. Everybody is real up before the game. The school had a pep rally today and everybody thinks we can win."

For others, even though the game didn't go their way, it was still an event they wouldn't miss. "I've been here at these games all my life," said Chan Foster, 68, of Cape Girardeau. "I've been to all the games except one since I played high school football for Central in 1930."

What does the Cape Central-Jackson game mean to Foster 51 years after graduating from high school? "There is still something there about this game," Foster said. "Even after all these years the rivalry is still there. But the game is just a lot of entertainment and enjoyment for me."

For Walt Metje, another former Central football player, it was "just another game." The 67-year-old Cape Girardeau native graduated from Central in 1934 and later quarterbacked Southeast Missouri State. "I don't root for anybody anymore," Metje said. "But I've never missed a Cape Central-Jackson game. You see I get free passes."

Memories of past games were good enough for others too. "It doesn't bother me that we're losing," 1978 Central graduate Donna Etzold said. "At least my class beat them."

But that didn't hold true for most Tiger fans. "I can't believe they're losing," Lynne Taylor, a 1973 graduate of Central said. "I really wanted them to win, because my husband is a graduate of Jackson and I wanted him to see Cape Central beat them. But they're playing pretty bad. This is the quietest I've seen the Central side of the stands in a while."

Some of the more solemn Tiger fans included Don Priest, 46, of Cape Girardeau. A 1952 alumnus of Central, Priest, like many in his section, was awfully quiet for most of the contest. "I feel let down that Central's lost the game," he said. "I hate to say it, but Jackson's just played with better intensity."

For the semi-neutral observer - if anyone sitting at Houck Stadium for a Jackson-Central game can be called that - the contest offered "a chance to observe two cities and the camaraderie between the two," said John McIntyre, now living in Cape, but a native of Sioux City, Iowa.

McIntyre observed enough before the kickoff that he made some pre-game wagers on Central. "Money is only tertiary," he said. "I thought Cape was going to win. They had played better competition. But it's not who you play, or how you play when you get in a rivalry game like this."

And then there were the disappointed. "Boring game," Jim Byrd, 42, of Cape Girardeau said. "Awful lot of buildup for such a letdown."