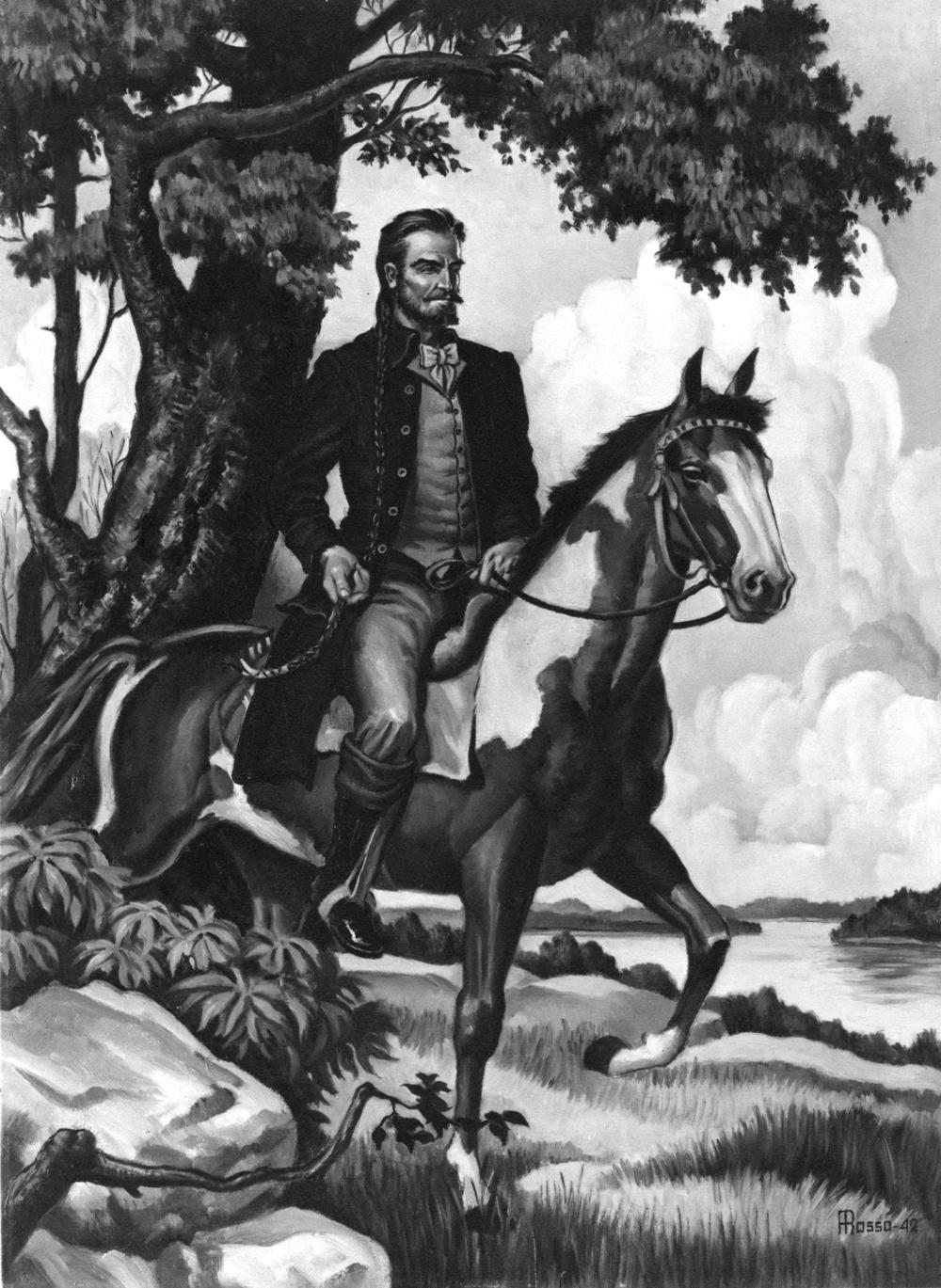 "Don Louis Lorimier's life reads like a romance," historians have written. Perhaps this is true. Certainly Louis Lorimier, the founder of Cape Girardeau, found adventure in living. He made friends easily and was held in high esteem by the Indians with whom he traded and by the Spanish officials he served.

Louis Lorimier (the Don was simply a Spanish title of respect corresponding to our Sir or Mr.) was a French-Canadian, born Sept. 26, 1748, at Lachine, on the island of Montreal, Canada. He was a descendant of Capt. Guillaume de Lorimier who had come to Canada from Paris in 1685. Little is known of Louis Lorimier's youth, except that he followed in his father's footsteps, becoming an Indian trader.

Information from the library in Montreal, Canada, tells that Lorimier's father was Claude-Nicholas-de-Lorimier, born at Lachine on May 22, 1705. He was a captain in 1749, and was made a Knight of St. Louis in 1759. The Lorimier family still exists there and is represented by a number of distinguished citizens, judges, lawyers and other professional men.

"Under Four Flags" might well describe Lorimier's eventful life. Born in Canada of French parentage, he aided the English in war against the American colonies. He later became a Spanish subject, and died a loyal American.

Lorimier's trading station in Ohio became the center of intrigues by the British and Indians against the American colonists, the Indians claiming the Kentucky bluegrass as theirs and which the white man was not to colonize.

Cape Girardeau's founder was responsible for one of the adventures which made the life of Daniel Boone the ideal of many a small boy. In 1778 Lorimier led a party of Indians into Kentucky, raided Boonesborough and captured Boone, carrying him back into Ohio and holding him hostage for a time. Lorimier told Boone that the Indians intended to destroy Boonesborough. When Boone noticed that the Indians were preparing for war he returned to Boonesborough to fortify it.

Four years later, Gen. George Rogers Clark and his Kentuckians captured Lorimier's store in Ohio, and Lorimier barely managed to escape. He went from Ohio to Vincennes, Indiana, where he stayed until about 1787. From there he crossed the Mississippi and settled for a time in the Ste. Genevieve district. With a group of Indians, Lorimier established himself near the present town of St. Marys and engaged in Indian trade.

About 1792 Lorimier moved to Cape Girardeau and was granted his petition to become a Spanish citizen. Proving his value to Spanish government by his ability to deal successfully with the Indians, Lorimier was rewarded with land concessions and was made commandant of the district. In return for this land grant and title, Lorimier was to bring in the friendly Shawnee and Delaware Indians to give protection against savage tribes.

The Indians had traded with white men and settlers for more than 100 years. The Spanish government made them a grant of several hundred thousand acres of land. Lorimier, as a trusted Spanish agent in Indian affairs, was frequently called to St. Louis as advisor and interpreter.

Lorimier established the Indians in a village on Apple Creek and then moved to the present site of Cape Girardeau where he founded the town in 1806.

Bartholomew Cousin was employed by Lorimier as interpreter, notary and "greffier." In return for his services Cousin was given an extensive land grant on Whitewater and Byrd's Creek. Cousin was born in France in 1767, the son of a farmer. He came to Cape Girardeau about 1792. Cousin was highly educated, wrote and spoke French, English and Spanish, and was a fine Latin scholar. He died in 1824 leaving a large estate.

A description of Lorimier was given by Louis Houck, historian and popular citizen of Cape Girardeau, in an address he made on the 100th anniversary of Lorimier's death. We have the best description of Don Louis Lorimier by Senator Rozier of Ste. Genevieve, whose father was personally acquainted with Lorimier. He says that the family was of noble blood. He was a well-formed man, nearly six feet tall, walked erect and with elastic step, had a handsome face and was an elegant equestrian. His complexion was fair, with blue eyes, and he had a profusion of hair, which was tied up in a queue, fastened with ribbons.

Don Louis Lorimier was fond of dress and display. He had a strong sympathy for the Indians, who idolized him, for he usually joined them in their sports and wild hunts. He spoke French, English and Indian languages with fluency, which was very advantageous to him in his intercourse with the hunters of the West, and the Indian tribes. Lorimier usually rode a spotted pony. He was taciturn, perhaps a habit acquired by long association with the Indians. He was quick and very energetic in his movements and very active.

Until 1946 the town had no picture of Lorimier. However, with Houck's description to guide them, the Missourian's art department was able to produce an oil painting, done by Tony Rosso, which met the approval of many persons competent to judge.

While in Canada Lorimier married an Indian princess, Charlotte Pemanpieh Bougainville, she being of French-Indian half-blood. This marriage gave him a standing with Indians of various tribes, and helped him considerably in his role of post commandant.

Charlotte Lorimier was a beautiful woman of medium height and was exceedingly neat and orderly. Her instincts and love were for the Indians and she sought their friendship and companionship. She died on March 23, 1808, and was buried in the first marked grave in Old Lorimier Cemetery. Her body was removed from the Lorimier home and was borne to the cemetery on a barge, up the river, towed by men with a cordelle, and followed by her family and Indians in canoes. She bore him four sons and three daughters: Louis, Jr., Auguste Bougainville, Verni, Victor, Maria Louisa, Agatha and Lisette.

Louis Jr. was the eldest son. In 1804 he was appointed to West Point by President Thomas Jefferson, and was graduated in the first class in 1806. Louis Jr. married Margaret Penny and lived on a farm near Cape Girardeau. He succeeded his father in trade with the Indians, and died in 1832.

Maria Louisa Lorimier was married to Thomas S. Rodney, and the daughter, Agatha, married Daniel Steinback, one of Cape Girardeau's first merchants. Lisette did not marry.

Lorimier also had a natural son, William, born in 1781, who came with him to Cape Girardeau. William married Hetty Thorn, and became a prosperous farmer in the district.

Two years after his wife's death, Louis Lorimier married Marie Berthiaume, a daughter of Francois Berthiaume who lived on Apple Creek in Perry County. They were married on June 23, 1810. After Mr. Lorimier's death his widow married John Logan, a relative of Gen. John A. Logan.

Lorimier was appointed a judge in the first court established here in 1805, but held this position only a short time. After organization of the courts, an attempt was made to persecute him by persons he had repressed while in charge as commandant of the district. He was indicted for horse stealing and other charges in the court for which he gave four acres to establish the seat of justice in his town. The charges, it turned out, were malicious fabrications and were thrown out of court.

Special tribute has been paid to Louis Lorimier and wife, Charlotte, in years past. A pagoda was placed over the Lorimier tomb and was dedicated on Aug. 5, 1917. On the 100th anniversary of Lorimier's death the local D.A.R. chapter conducted exercises at the cemetery. On the evening of this special observance, June 26, 1912, Louis Houck read a paper on the founder's life before citizens gathered at the courthouse.

On June 21, 1952, three descendants of Lorimier participated in a wreath-placing ceremony at Lorimier's tomb. The ceremony was part of rededication services that followed repairs at the cemetery. The descendants, wearing Boy Scout uniforms, were Neal Lorimier and Robert and Donald Jueneman.

Probably the most elaborate of these tributes was the dedication ceremony on the Indian Park marker in October, 1946. Ten descendants of Lorimier were present in Indian Park, located at Lorimier and William streets, where a large granite boulder appropriately was dedicated on ground rich in historical lore. Dr. W.W. Parker spoke, and Neal Lorimier, dressed as Louis Lorimier, and the Jueneman brothers, in Indian costumes, clasped hands in front of the marker in token of the friendship Lorimier had for the Indians.

Louis Lorimier Jr. was the 25th cadet to graduate from the U.S. Military Academy at West Point in the year 1806. Houck's History of Missouri carries this notation regarding the Lorimier appointment to West Point.

"In July, 1804, President Jefferson, in order to give expression to the friendly feeling of the people of the United States toward the inhabitants of the ceded territory (the Louisiana Purchase) appointed four young men belonging to leading families of Upper Louisiana to West Point, the new military school then just organized.

"The young men so appointed were Auguste Chouieau, Jun., Charles Gratiot and Pascal Vincent Bouis from St. Louis; Louis Lorimier, Jun., and Auguste Bougainville Lorimier from the Cape Girardeau district, and in 1805, Louis Valle was appointed from the Ste. Genevieve district."

The history adds that Louis Lorimier Jr. was graduated in 1806, appointed a second lieutenant and assigned to the First U.S. Infantry, served on the western frontier and resigned in 1809. Later Lorimier became a trader among the Shawnee and Delaware Indians in this area. His brother, Auguste, was never graduated from the academy.