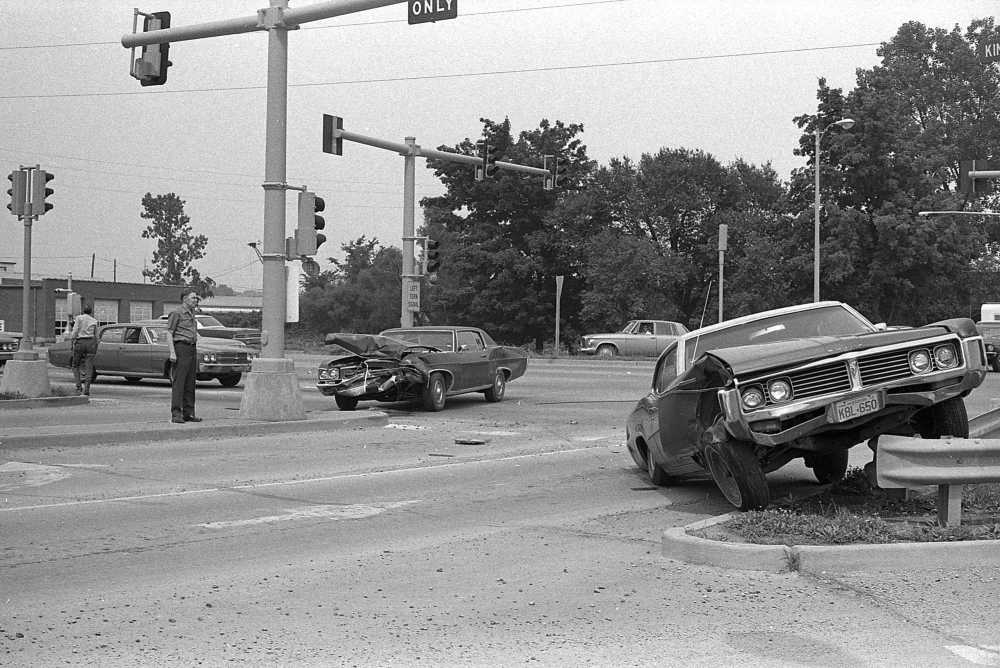 Oliver J. Johnston of Caruthersville, standing on island, examines wreckage of his car, left, Thursday afternoon after malfunctioning traffic signals contributed to a two-car crash at Kingshighway and Independence. Car on guardrail was driven by Leonard T. Clayton who suffered minor abrasions. Lights were stuck on green in both north and southbound lanes and on red in the east and westbound lanes. View is toward the northeast.

Faulty traffic signals at Kingshighway and Independence have been blamed in part for a two-car accident in which one of the motorists escaped with only minor injuries.

The Independence intersection and two others along Kingshighway--William and Broadway--have been the scene of several accidents which have been linked to malfunctioning lights.

Injured in the crash was Leonard T. Clayton, the driver of a westbound car which was struck while it proceeded across Kingshighway while lights were jammed. He suffered abrasions to a knee and his left arm.

The accident occurred about 3:15 p.m. when a vehicle driven south by Oliver J. Johnston of Caruthersville continued through the intersection on a stuck green light and crashed into the left side of Clayton's car, which had proceeded across the intersection after stopping for a red light.

Police said lights in the north and southbound lanes apparently had been stuck on green for some time and traffic heading east or west was unable to move across the intersection safely.

Although police were unable to determine the exact number of accidents which have been caused by faulty State Highway Department traffic signals along Kingshighway, they acknowledged there have been several.

The State Highway Department, realizing the lights have malfunctioned more than they should, has decided to supplement them with a stand-by signal controller system of the "fixed time" type.

This system, unlike the present traffic-actuated system, allows a preset interval of time for each light. Although it is not as efficient, Wm. H. Shaw, District 10 engineer at Sikeston, told The Missourian in April, "It is reliable and much more trouble free."

The new system would allow repairs to be made while the signals are functioning on a time sequence, he pointed out.