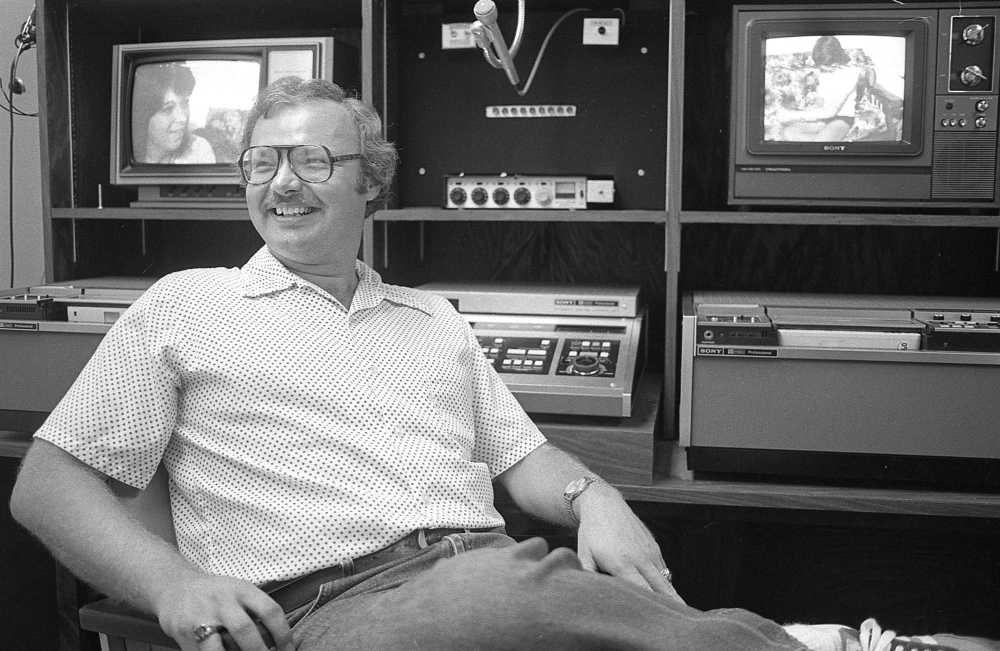 Television/radio broadcaster John Harth is happy with his decision to prepare for the priesthood. His biggest worry is learning to let God direct his life, he says. (Fred Lynch photo)

From television broadcaster to priest

When school opens the first week of September at The Pontifical College Josephinum, near Columbus, Ohio, former Cape Girardeau television/radio broadcaster John Harth will be among the student body.

Harth, who has been involved in broadcasting since his sophomore year in high school in Mendota, Ill., will begin preparation to become a priest, just one week before his 31st birthday. He recently talked about this decision to leave a career of 16 years to enter a new one.

The decision to prepare for the priesthood was not a quick or easy one, Harth said.

"It began slowly, with the thought first flitting through my mind sometime during the summer of 1979. I flitted it right out, I thought, but a comment in a sermon, a line from a movie, lots of things, kept nagging at me. It was an accumulation of things that triggered my decision," Harth remarked.

"I was not where I thought I should be in broadcasting. You set certain goals for yourself. I planned to be in a much larger market by now. I spent seven years at KFVS, starting there in May of '74 and before then, I had worked as news and sports director at KGMO. Seven years prior to that I was employed at various stations in New Jersey and in Illinois, my home state.

He continued, "It was time for me to make some kind of change, and here was this thought staying with me that maybe I should become a priest. I gave myself a deadline of early this spring to make that decision. My deadline came and went and I still wasn't sure. I was really disturbed most of the time."

Questions that are consistently being asked of Harth by friends, are "why do you want to be a priest?" And, "how will you give up girls and dating?"

His consistent answer is: "I'm not absolutely sure I will be a priest. I have one and a half years of college where I must pick up 12 hours of college theology, 18 hours of philosophy, a course in modern language and a class in Latin. Then I will have four years at the graduate school of theology there.

"I have a while before I must take a final vow. They give you adequate time to prepare yourself for the commitment."

As for girls and dating, Harth said he still looks at girls, and he doesn't ever expect to give up having women as friends. "When and if I commit myself to being a priest, then I will be faithful to my vows, just as if I was committing myself to a marriage," he remarked.

Talking with a number of local and area priests about his career change was helpful in some aspects and disturbing in others, Harth said.

"Some of them couldn't really take me seriously, I'm afraid, but others were very encouraging."

A telephone conference with Bishop Bernard Law of the Springfield-Cape Girardeau Diocese finally led to getting Harth started on his enrollment at the college.

I've tried to be practical about this lifestyle change," Harth said. "It's my nature to be a practical person. It's difficult though, for me to live solely by faith.

"I've quit my job. I don't have a paycheck coming in. I'm going back to school and I've never been real strong in academics. I made fairly good grades in high school, but just enough to get by with. I know I am older than most of the other students will be. I'm apprehensive about the future, but I'm comfortable with the knowledge that at this point, I am doing the right thing," he noted.

If Harth takes his final vows in the next five or six years, he hopes to be assigned somewhere in the Springfield-Cape Girardeau Catholic Diocese as a parish priest.

"There are those who keep saying I will miss a lot not having a wife and family if I decide to stick with becoming a priest. Well, I can see many other ways of being fulfilled. A parish priest has many families.

"Besides my worry about making grades, my other worry is that I've been so used to running my life for so long, making my own decisions, will I be able to let go and let God work?

"However, since I finally made the decision, my life has been falling into place pretty good," he said.

Here is a photograph and interview with the Rev. John Harth published Jan. 24, 2010 in the Southeast Missourian: