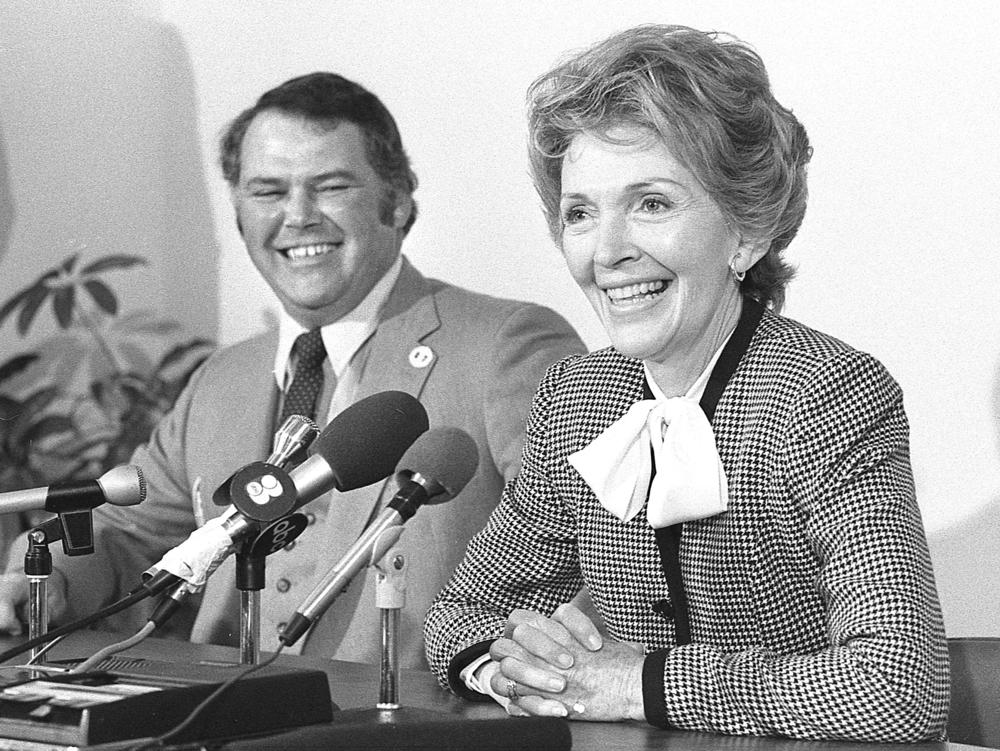 Nancy Reagan shares insights about her husband's GOP race for the White House at a press conference Friday, Oct. 31, 1980 in Cape Girardeau. Shown with her is Cape County Republican Chairman Robert Naeter. 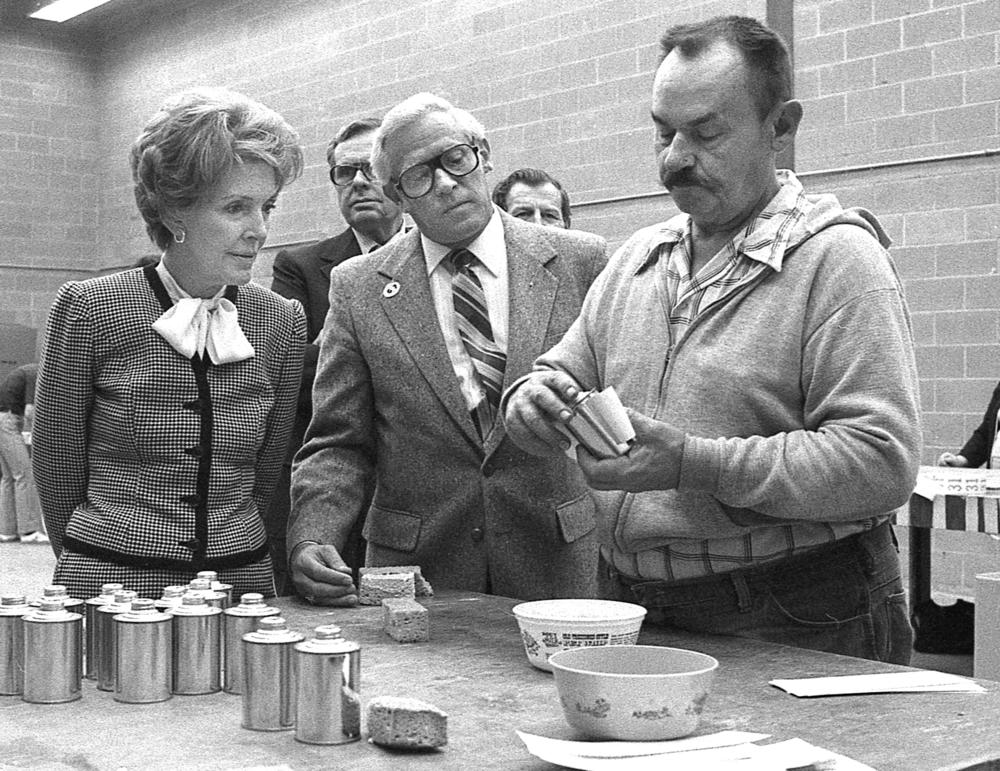 Nancy Reagan, wife of GOP presidential hopeful Ronald Reagan, toured VIP Industries here during a brief campaign stopover Friday. Here, she watches as VIP employee William Hester puts labels on cans at the workshop on Highway 74. Mrs. Reagan was shown through the facility by a number of persons, including Hilary Schmittzehe, shown here with her. (Fred Lynch photos) 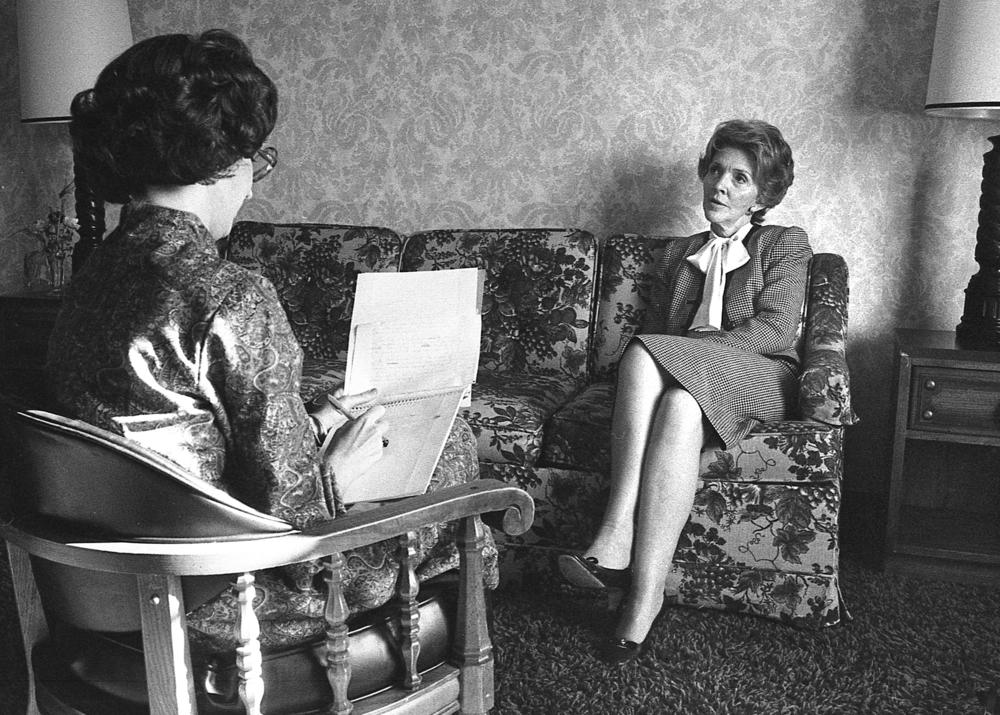 Nancy Reagan in another kind of spotlight now

She bowed out of Hollywood's spotlight in 1956, giving up acting to pursue a real life role: That of wife and mother.

But Nancy Reagan is back in another kind of spotlight now, a political audition of sorts and one that, if voters so mandate on Tuesday, will thrust her into the most important role of her life--First Lady.

Mrs. Reagan, who has been in so many cities during the past few months "that I couldn't even begin to count them," added Cape Girardeau to that list during a brief stopover here Friday.

She toured VIP Industries here, and at a press conference smoothly fielded questions ranging from GOP presidential candidate Ronald Reagan's age to the tone of the campaign in recent weeks.

Reagan is at 69, 12 years his wife's senior. The issue of his being too old to be president, though, has apparently been resolved, according to Mrs. Reagan. "I heard a lot about it at the beginning of the campaign, but now I never hear it asked," she said. "I think the fact that he went through all the primaries without dropping by the wayside answered it."

While the age factor doesn't bother Mrs. Reagan, recent comments by President Carter that insinuated Reagan would be likely to lead the U.S. into war disturb her a great deal.

Issues of that nature are ones Mrs. Reagan said she prefers to avoid, "but I have to say in the last week I have gotten into it. I was very offended, very upset at that kind of campaign.

"To put the campaign on a personal level of attack against my husband is a terrible thing to do," she said. "In this day and age when everyone knows what a war would mean, comments like that are unthinkable."

The campaign, Mrs. Reagan believes, "should be on Carter's record the last three-and-a-half years on the issues. I don't think Carter should make my husband appear to be something he's not."

Mrs. Reagan, vehement in her disapproval of recent Carter speeches, said it was "my mistake to believe that there wouldn't be any more personal attacks.

"I would like Carter to explain to me and to all the people about inflation, about unemployment, about a vacillating, weak foreign policy. One day he says it's OK for the Russians to be in Cuba, the next day he says it's not. I'd just like him to explain all that to me."

Although there have been some shadows cast over the campaign, Mrs. Reagan was enthusiastic about her travels on the campaign trail.

"I think the American people are just great," she said. "They're wonderful. I think sometimes we get a little insular, and campaigning gives us the opportunity to meet people. The American people have strength, basic goodness and intellect.

"Politicians underestimate the people. I don't believe the philosophy that 'we can't tell them that, they wouldn't know how to handle it.' People are crying out for leadership, and they want someone to get them the facts. They'll deal with it."

Mrs. Reagan emphasized that should her husband be the 40th President, her role would not include becoming involved in major policy decisions. "I don't see myself doing that," she said.

The Reagans have been married almost 29 years. A successful marriage takes work, and Mrs. Reagan said she wonders if young people today make the same effort. "Generally speaking, I have a feeling that young people don't work as much at marriage as us 'olders,'" she commented.

The Reagans will spend the remainder of the campaign working together. And the night of Nov. 4, Mrs. Reagan said she and her husband "will be in California with friends, spending the longest night in history."

A campaigner with style

All Nancy Reagan says she wants to be is Ronald Reagan's First Lady.

Her self-imposed label is probably accurate. It's difficult to imagine Mrs. Reagan embroiling herself in affairs of state, but it isn't difficult to picture her in the role of a gracious hostess to the world.

A stint at Smith College, an acting career and the years spent in the California governor's mansion have given Mrs. Reagan an easy poise as well as the ability to communicate easily.

The months she has spent campaigning with her husband for the nation's top elected position has also given her a keen awareness into the machinery of a political campaign and an equally keen appreciation for some of life's smaller pleasures--not the least of which, she says, is "looking forward to a good night's sleep in my own bed."

In an interview with The Missourian, Mrs. Reagan said she will be "glad when the campaign is over. Sometimes I think they're just too long."

Although she's hesitant to discuss what she would do as First Lady, chalking it up to "superstition," Mrs. Reagan is eager to share ideas about prospective programs a First Lady could take under her wing.

"I'm a doctor's daughter, and my interests naturally go in that direction," she said. "Drug abuse is a serious problem, and I'd like to work with that."

She would also like to further the "foster grandparent" program that enables senior citizens and youngsters to relate to one another. "It's a good idea, something that takes care of the elderly and the children and gives what both need."

Mrs. Reagan said she has gotten used to life in a fishbowl, but is firm in her belief that "if you have a public life, it's also essential to have a private life."

Although she misses the comforts of home, Mrs. Reagan is also candid in her self-assessment as a cook. "I'm no cook--I admit it," she said, adding that her husband's favorite dish is fortunately an easy one--macaroni and cheese."

Being the wife of a politician, she has found, is not so easy. "You have to like people. If you don't, you're in serious trouble right there. And you have to be as concerned about issues as your husband is, and as understanding.

She has found it difficult to be understanding about recent twists the campaign has taken, particularly those dealing with personal attacks against Reagan.

"Carter should be talking about the issues. About spots in Michigan, Illinois, Ohio where people are out of work.

"One of the hardest times to keep my cool, I think, was in the South Bronx last summer. The people there were frustrated, bitter, angry. And understandably so. The place was like a bombed out city.

"People should be talking about issues like that, about solving problems. That is what this campaign is about."

The Carter-Reagan debate, Mrs. Reagan said, "gave people a chance to hear my husband refute personal charges Carter has made against him." She felt confident of its outcome, she added, "because Carter had not debated since 1976."

Although Mrs. Reagan and her husband have been the most visible on the election trail, Reagan's two older children are also actively campaigning. The younger Reagans "are involved in their careers trying to get them started," Mrs. Reagan said. All the children are different, with different aims and goals. They're certainly not clones of Nancy and Ronald Reagan."

Mrs. Reagan's life, some have said, is an American dream come true. "I don't know that it's all coming true," Mrs. Reagan said, "but yes, there are times I feel like maybe it is."

Part of the dream is not the living out of suitcases existence Mrs. Reagan has coped with since the campaign began in earnest early this fall.

"I miss relaxing, and I miss all the little things," she said. "I miss my home. I miss my house, my garden. I find myself rearranging hotel room furniture and flower arrangements. It'll be good to get home."

Nancy Reagan isn't ready to say yet just how she plans to handle the duties of First Lady, should she find herself in that position Wednesday morning.

"All First Ladies are different, and go about their job differently. I guess all I can really say is that I would be me."