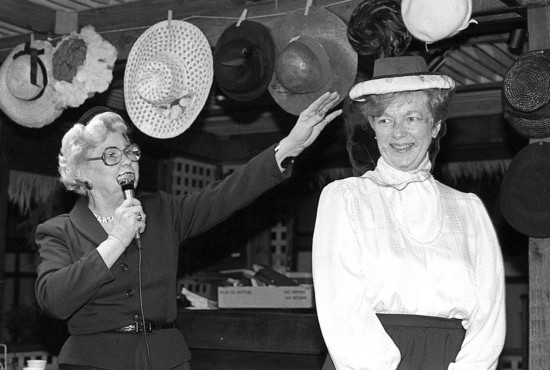 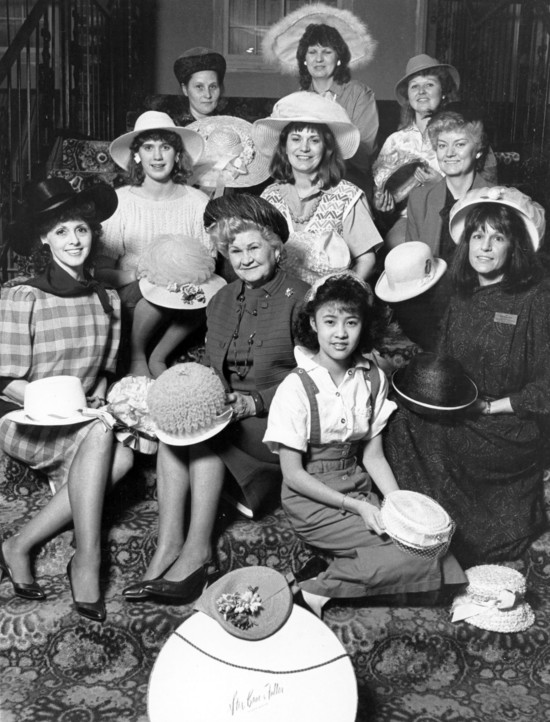 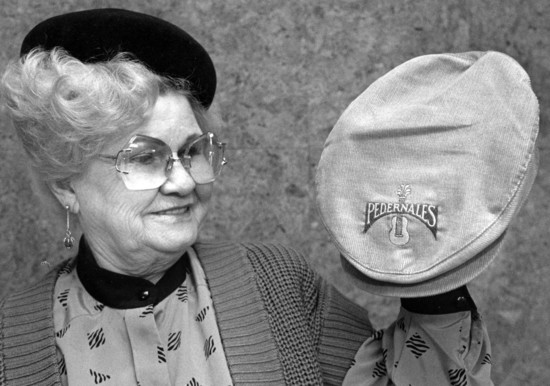 Vi Keys holds a golf hat that was worn on the recording studio by country music singer Willie Nelson, sporting the name of Pedernales, his golf course. It's one of more than 100 new and used hats that will be auctioned Tuesday at 7 p.m. at the Holiday Inn Gazebo. The fourth annual event will benefit the Arthritis Foundation. 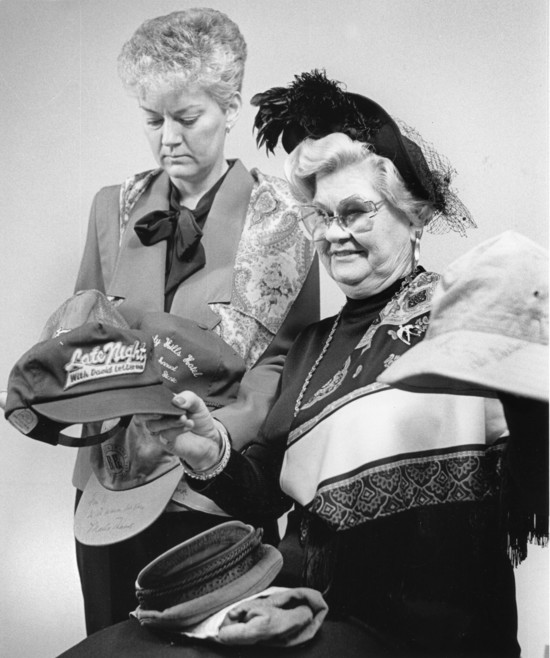 Vi Keys, right, and Gail Stallion look over some of the hats that will be up for bids at Vi's 5th Annual Hat Auction to benefit the Arthritis Foundation. The auction is scheduled for Wednesday at 7 p.m. at the Holiday Inn. A Late Night with David Letterman cap, a Phil Donahue hat, Tab Hunter's hat, DUNE author Frank Herbert's hat and a Martha Raye silk scarf are just a few of the items available at the auction.

Vi Keys has never been one to "throw in the hat" without first doing her best to meet whatever the challenge facing her.

In fact, when it comes to taking on the challenges and turning them into victories, be they large or small, Mrs. Keys is hard to beat.

She is a woman who, as a child, carried drinks of cool water to the Oklahoma farm field where her brother labored. In return, she got the chance to play his harmonica.

She is a woman who financed drum lessons by rolling silverware in an Arkansas cafeteria.

She is a woman who signed on with an all-girl orchestra, who did a stint as a calliope player with a traveling circus, and who went on to study jazz at the prestigious Kansas City Conservatory of Music.

She is a woman who, through a God-given gift of music and a heart blessed with compassion and sharing, has worn many hats during a lifetime that has followed her philosophy that "love, like music, is creative."

And it was pure creativity that led Mrs. Keys to create a philanthropic project that, at least in terms of numbers, can be likened to Dr. Seuss' "The 500 Hats of Bartholomew Cubbins."

Known to friends and those who admire her music as just "Vi," Mrs. Keys and her late husband, Eddie, established Keys Music Store here in 1967, after a nine-year run as musicians at the Purple Crackle Club in East Cape Girardeau, and many years before that as professional musicians elsewhere.

Although Mrs. Keys has volumes of memories of the days when she and Mr. Keys were on the road as musicians, she is not one to dust off old memories; rather, she looks at today, and tomorrow, and what she can do to make those days good ones.

The first year she gathered up an armload of her own hats and carried them to the Gazebo the week before Easter for what she billed an "Easter Parade." Mrs. Keys says she made a little money that year to donate to charity.

By the second year, she was using her head for much more than holding a hat, coaxing friends and relatives to help search out antique hats and speaking out in behalf of the cause she chose to help: The Arthritis Foundation.

The choice of the Arthritis Foundation as the beneficiary for her hat auctions was an easy one, Mrs. Keys says. "So many musicians have crippled hands and can no longer play their instruments. And they're not all old; one young drummer is just 25 and he's faced with crippling arthritis. It's something we can all be affected by, no matter what our age."

The hat auction this year will include about 70 hats, along with scarves and some other accessories, Mrs. Keys notes. There are men's hats, women's hats and "Blues Brothers" hats, she adds. She adds pieces of costume jewelry to a few of the chapeaus as well.

The 1985 auction raised about $300, and Mrs. Keys hopes this year the figure will approach $500. Although none of her hats have even remotely approached the record-setting hat ($29,471 for a hat worn by Emperor Napolean I), Mrs. Keys says bidding on her hats can be "fast, but goodnatured."

Auctioning the hats isn't all that difficult, Mrs. Keys says. "Usually, if a woman tries on a hat, she buys it."

Throughout the year, Mrs. Keys pokes through antique shops and flea markets in search of old hats. "They're getting scarce now," she says, "because the hats of the 20s, 30s and 40s are very 'in' right now. The glamour magazines are all showing updated versions of these styles."

Mrs. Keys has worn hats for years. Some she says she will never part with. "I have a blue feathered hat my husband gave me for Easter 20 years ago. It's still very special to me. And I have a straw, wide-brimmed hat that belonged to my mother. I couldn't let it go, either." She also has a sentimental attachment, she says, for "Minnie Pearl" hats that she wore during some of her professional appearances.

Her mother, she remembers, "was a hat person. Every time she would leave the house to go anywhere, even the grocery store, she put on a hat. I grew up watching her wear hats."

Among the hats up for bid this year are hats with exquisite colored feathers, an imported fur tam from Paris, designer name hats from the 1940s...the selection is varied. A bonus to her collecting, Mrs. Keys admits, is that she has the opportunity to wear the hats in the months prior to the auction. Most of her favorites, she says, are "little cocky hats with a feather--like the ones movie stars in the '30s wore."

The hat auction, Mrs. Keys hopes, will continue to grow and bring in funds for her charity. And with her dedication and determination behind the project, it's bound to be "hats off" for many successful events!