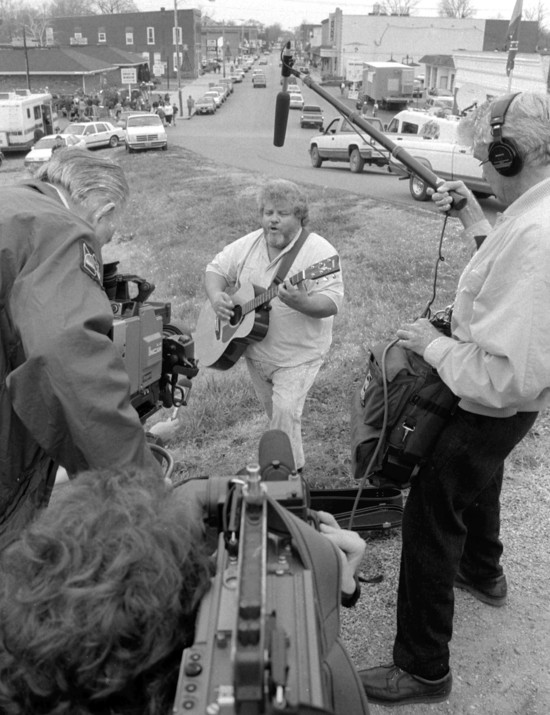 NEW MADRID -- For the past several months, tiny New Madrid has been the focus of growing national and international attention. On Sunday, the media circus came to town.

The attention was touched off by the projection of climatologist Iben Browning that a major earthquake could occur along the geological fault named after the town.

Residents of New Madrid and others who live along the fault will learn today if Dr. Browning's projection comes to pass.

New Madrid, population 3, 204, is located at the head of a large bend in the Mississippi River, in the Missouri Bootheel.

Until recently, few people outside of the area had heard very much about New Madrid, and even fewer knew how to pronounce the name of the town correctly (New MAD-rid).

But Browning's projection caught the attention of the news media, and New Madrid is now on the minds of people throughout the nation and the world.

Over the weekend tourists, visitors and the news media have flocked into the town.

"I've seen more tourists in the past two weeks than I have seen in the past six months," said Jean Hanner, manager of Rick's Texaco, located on Main Street, a few blocks from the river.

As Dec. 3 approached, the media continued to swarm in to town. By mid-day Sunday, more than 20 satellite transmission trucks and vans were parked along the New Madrid levee and in other parts of town. A network technician said that was more than there were at the Super Bowl game last year.

For decades, Lou Hobbs was a musical representative of Cape Girardeau and Southeast Missouri.

His recordings hit the national country charts, and Hobbs gained widespread media attention for his song about the area's constant earthquake threat in the context of Iben Browning's 1990 prediction of an increased risk of a major earthquake on the New Madrid fault line.

Hobbs died Sept. 20, 2007 following a battle with Parkinson's disease that lasted more than a decade.

Hobbs was born Oct. 11, 1941, into a poor family. He learned to play guitar as a teenager, following in the footsteps of his musical mother, Ruby. By the late 1950s he had joined fellow Southeast Missouri native Narvel Felts of Malden, touring the country performing a new style of music called rockabilly. He would later be inducted into the Rockabilly Hall of Fame.

Hobbs split from Felts and start his own band, continuing to play the rockabilly style he latched onto as a teenager. Several of his recordings hit the U.S. country charts in the 1980s, and the late 1990s and early 2000s saw Hobbs' music hit the Top 40 of the European independent music charts. In 1986, Hobbs started his own TV show, aired on KFVS12, on which he performed and interviewed famous artists like Johnny Cash, Kris Kristofferson, George Jones and Randy Travis. The show was aired in other markets, as well, and stayed on for years, making Hobbs a familiar face to locals.

Hobbs got his own advertisers for the show and marketed the program himself, said KFVS12 general manager Mike Smythe, and the hard work paid off.

"He had a fan base, and we'd hear about it when the show didn't run," Smythe said.

"He wouldn't give up," Keener said.

In 1990, Hobbs gained widespread attention for his song "Living on the New Madrid Fault Line," inspired by Browning's prediction.

Most people familiar with Hobbs knew him through his music, but those with a closer relationship said his personality was largely defined by a philanthropic spirit. Every Christmas Hobbs would anonymously "adopt" a family to provide with food and gifts, said daughter Ruby Voshage.

"If you wanted it and he had it, he'd give it to you," Voshage said.

Bill Anderson, owner of country station C106, said Hobbs' music was a fixture on his station. The station played Hobbs' songs Friday as a tribute to the musician.

"He was a very talented person, and pretty much made a living with the music business, so you would have to say he was a professional," Anderson said.

"Lou Hobbs has probably done more benefits to help people out than any artist that I know of, or anyone else in Southeast Missouri," Anderson said. "If a family was in need, all I would have to do was call Lou."

In that spirit of generosity Hobbs' family is asking that memorial donations be made to the food pantry at the Red Star Baptist Church, one of Hobbs' favorite charities.

The New Madrid seismic zone of southeast Missouri and adjacent States is the most seismically active in North America east of the Rockies. During the winter of 1811-1812 three very large earthquakes devastated the area and were felt throughout most of the Nation. They occurred a few weeks apart on December 16, January 23, and February 7. Hundreds of aftershocks, some severely damaging by themselves, continued for years. Prehistoric earthquakes similar in size to those of 1811-1812 occurred in the middle 1400's and around 900 A.D. Strong, damaging earthquakes struck the southwestern end of the seismic zone near Marked Tree, Arkansas in 1843 (magnitude 6.3), and the northeastern end near Charleston, Missouri in 1895 (magnitude 6.6). Since 1900, moderately damaging earthquakes have struck the seismic zone every few decades. About twice a year people feel still smaller earthquakes that do not cause damage.