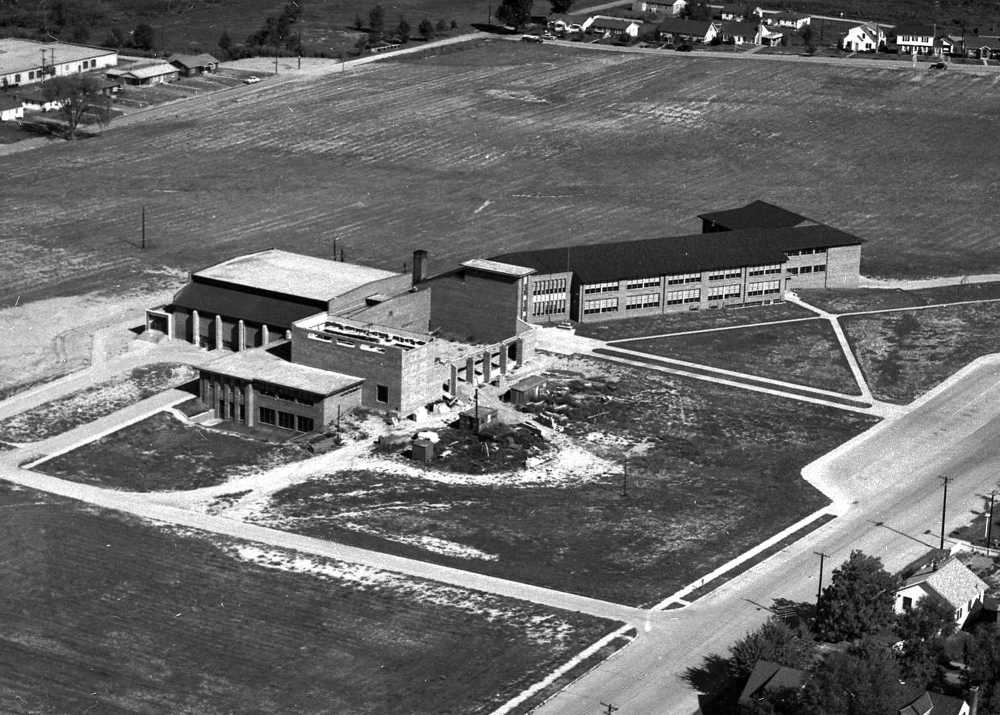 The auditorium at Central High School on Caruthers Avenue is shown under construction in 1954. The new high school opened Sept. 8, 1953 with two units, the classroom section and music wing and a corridor linking the two. The gymnasium was built in 1954 and the auditorium was completed in 1955. (G.D. Fronabarger photos) 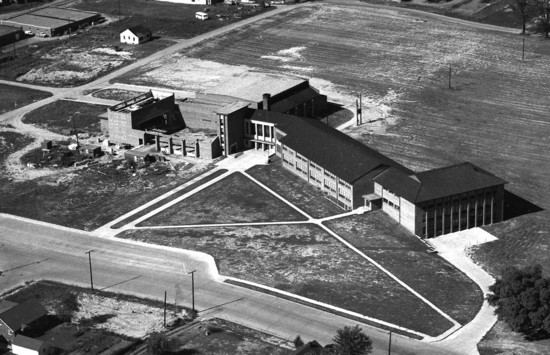 Construction of new Central High School, spreading out over its spacious west end site, has started none too soon.

This is apparent in an enrollment study made by Supt. L.J. Schultz showing that in 1955 the school system can expect 765 more pupils than are now enrolled.

The new high school, which will be open in September 1953 in two of the four units, is expected to help increase enrollments. Mr. Schultz said that experience proves that a new building always brings out more pupils.

Often repeated is the school district's plan of caring for pupils when the new high school is ready for use. The four high school grades will move from the present high school to new Central. The seventh and eighth grades of Lorimier, Washington, May Greene and Franklin will go to old Central. Kindergarten will be started in those four schools.

To Use New Building

This arrangement is expected to ease the overcrowded conditions that have caused extra classrooms to be built in halls in two instances and brings other special situations in others.

The contract calls for the main classroom wing of the new high school to be completed in time for the start of school in September 1953. Work was started last summer but rain then and during the fall and cold weather held back construction.

By the time the classroom and adjoining music section are finished in 1953, work will have already started on the gymnasium, the third of the four units. It will be followed by construction of the auditorium. Both of these are scheduled in time for the 1955-56 school year....

Central will continue to play its football games at Houck Stadium. The Board of Education has expressed the belief that it would be unwise to spend money for a high school stadium when the community has a similar structure available at a nominal rental. Schedules can continue to be arranged to avoid conflict with State College activities....

The gym will seat between 1700 and 1800 persons, considered ample for most games Central will play. Mr. Schultz pointed out that if occasion should arise where more room was needed, Houck Field House is available at a rental charge.

Last June the people voted a $1 tax levy on the $100 assessed valuation. This continues for three more years when it will come to an end. Despite a belief from some individuals that it will be sought again, school officials declare that there is no truth in such comment.

The money from the levy and the $795,000 bond issue has been apportioned to care for the construction program, Mr. Schultz said. If, for some unexpected reason it should not be enough, school officials would let construction go for a period rather than ask for another vote on the matter.

Actually, by voting the levy, Cape Girardeau taxpayers are saving themselves thousands of dollars in interest payments. A levy doesn't require interest, but the bonds do, and the amount is in the thousands over their 20-year life.

Right now, because work is in abeyance, the bond money has been invested and is earning the district money in treasury notes that can be taken up when the money is needed to meet obligations.

As assessed valuation increases in Cape Girardeau, the school tax levey is going to return additional funds. This money will be used wherever the need exists.

Cape Girardeau's school tax rate is $2.82 per $100 assessed valuation. The figure is divided as follows: $1 for building (the levy voted last summer); 90 cents for teachers, 60 cents for incidentals, 22 cents sinking to retire bonds, 10 cents to pay interest on the bonds.

The board is empowered to levy $1 without a vote, but must have approval of the people to increase the tax above that amount. This first dollar is divided into 65 cents for teachers salaries and 35 cents for the incidental fund.

Here are pictures of the former Central High School on Pacific Avenue which became the junior high: