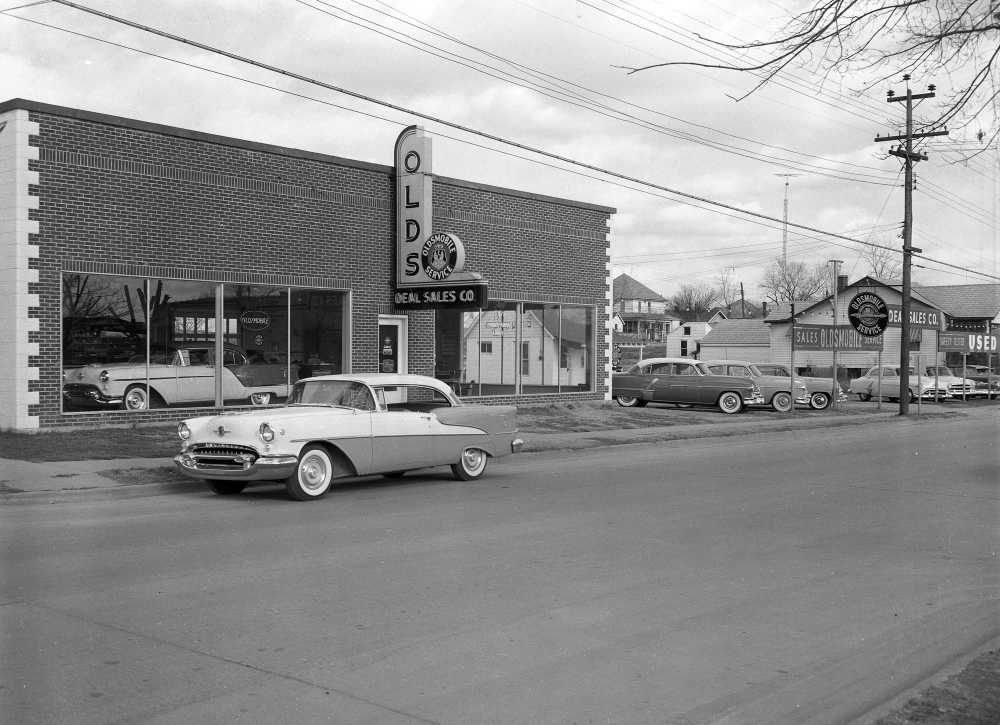 Deal Sales Co. was doing business in 1951 at the location of the former Hudson dealer, Walter Adams Motor Co.

Read more about the Hudson dealer in this blog: 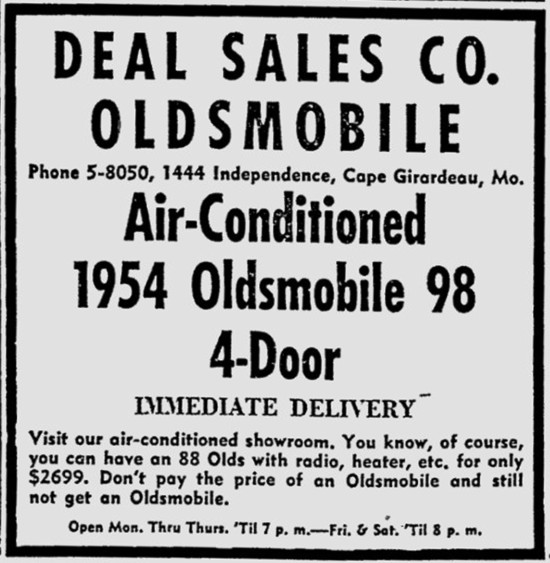 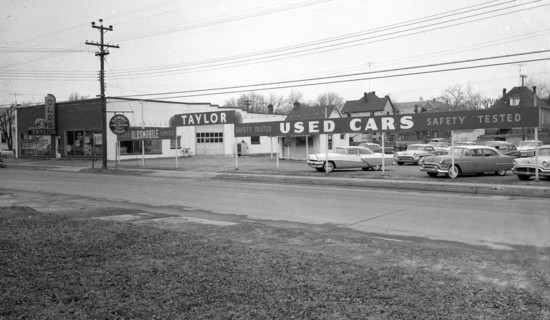 This picture was made after Dean Taylor bought the Oldsmobile agency from R.R. Deal in 1955.

G.R. Jones, general sales manager of the Oldsmobile Division, today announced the appointment of Taylor Oldsmobile as an authorized Oldsmobile dealership in Cape Girardeau. The new firm will open for business this week at 1444 Independence street with an extensive display of new 1955 Oldsmobile models in a special open house setting.

"It is a real pleasure to welcome this organization of qualified people into the nationwide network of Oldsmobile dealers," Jones said. "Members of the Oldsmobile owners family will benefit greatly from the operation of this dealership. The complete line of 1955 Oldsmobiles and reconditioned used cars will offer a wide selection of automobile values for every budget. Modern service equipment will be manned by Oldsmobile-trained experts. We feel that the new Oldsmobile organization will make a real contribution to the community."

The new firm is owned by Dean Taylor who purchased the dealership as well as the equipment and stock from R.R. Deal, who operated the agency under the name of Deal Sales Co. Taylor formerly operated a Chevrolet agency at McLeansboro, Ill.

The new dealer said today that it is a great feeling to join the Oldsmobile dealers' group. Oldsmobiles, he said, moved up among the first four in retail sales last year. This, he credited to the greater public acceptance of such engineering developments as the high compression "rocket" engine, Hydra-Matic super drive, G.M. power steering, power brakes and automatic headlight control.

One of the highlights of the get-acquainted weeks at the new dealership will be a display of body types, upholstery trims and color combinations which have been well accepted at auto shows throughout the country. Among these models are the "88" and super "88" Holidays and the "98" deluxe Holidays and four-door sedan. All 13 models in the three series of the 1955 line either will be displayed or available to order in a wide variety of colors including numerous two-tone combinations.

Taylor said that he plans to extend the present service facilities of the agency. Construction is to begin immediately of an addition to the service department which will almost double its present size. A drive leading to it will run along the east side of the showroom, he said.

Purchase of the Taylor Oldsmobile Agency Monday was announced today by Jesse O. Millikan of Millikan Inc. Other members of the purchasing corporation are Julia E. Millikan and Homer E. Millikan.

In making the announcement, Mr. Millikan said the J & J Motor Co., 221 Independence, would be discontinued and the Cadillac agency would be moved in with the Oldsmobile agency at 1444 Independence as soon as possible.

Both the building and dealerships of the Millikan Motor Co., also located at 221 Independence and composed of DeSoto and Plymouth agencies will be offered for sale, Mr. Millikan said.

Read more about Millikan Motor Co. in this blog:

Townes Cadillac-Olds Service, 1444 Independence, was this week purchased by Dean G. Taylor, who several years ago was one of the firm's owners. Purchase was made from the Charles Townes estate and Mr. Taylor formally took over operation of the Cadillac-Oldsmobile agency this week. He operated the agency here from 1955 to 1958 and sold it to Jess Millikan, the late Mr. Townes acquiring the firm in April, 1962.

Mr. Taylor, since leaving Cape Girardeau, has been a dealership manager for Cadillac agencies in East St. Louis and Belleville, Ill., and the agency here will now be known as the Taylor Cadillac-Olds Agency. He said today there will be no change in the personnel which served the Townes agency.