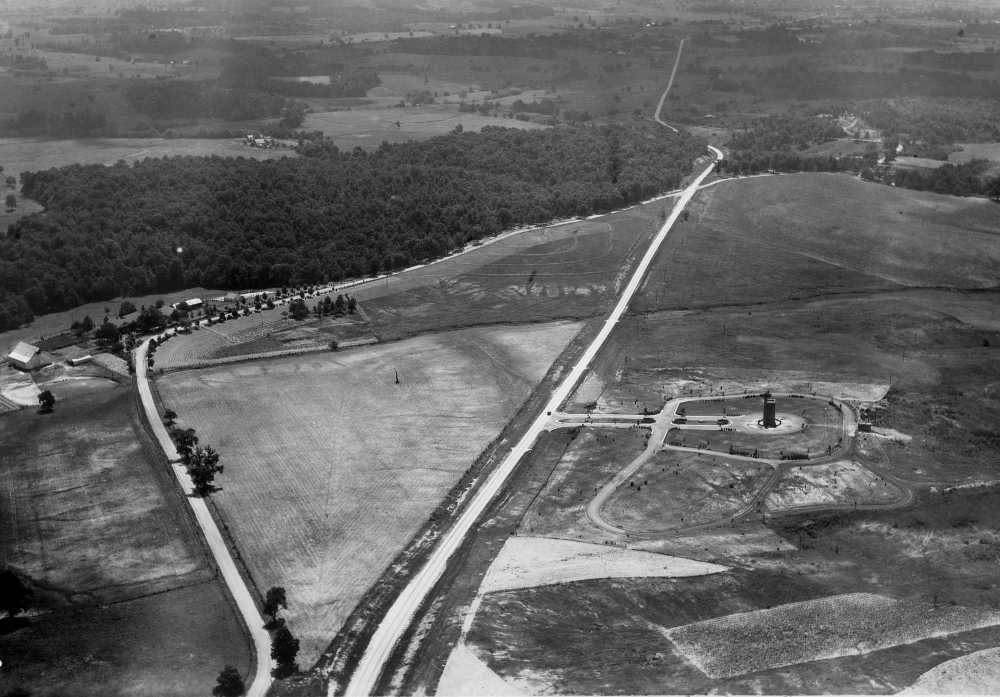 The photograph above by Papin Aerial Surveys shows Highway 61 to the north of Cape Girardeau with the Cape Girardeau County Farm at left, and Memorial Park at right. The Tower of Memories at the cemetery was dedicated in 1934. 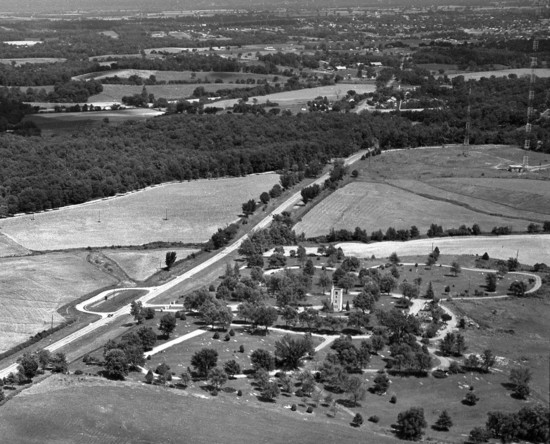 This photograph of Memorial Park was made by G.D. Fronabarger at a later date. Notice the KFVS-TV antenna tower at the right. The television station began broadcasting in 1954.

The County Court was in special session today. Among the business propositions coming up was one from Hugo Felix of Kansas City, who proposes to establish a memorial burial park on the county farm.

The site selected is 30 acres in size and covers the hill top just south of Highway 61, the land to be purchased by the association to be formed among local people, and the cemetery or burial park to be maintained by an endowment fund to be created from the sale of lots.

The place along the highway is to be provided with parking space, and all driveways through the park are to be of sufficient width to allow the passing of cars going in opposite directions. The entire park is to be beautified with trees, shrubbery and whatever landscape gardening can do towards improving the appearance.

The park is be be perpetually cared for by the interest from the endowment fund, and local people will be in charge. C.A. Vandivort of Cape Girardeau accompanied Mr. Felix and appeared in the court room with him. The purchase price tentatively agreed upon is $100 per acre. The court, Highway Engineer R.R. Bedwell and Roy Woeltje as surveyor, agreed to meet on the site this afternoon to make a preliminary survey of the premises.

County Sells Tract to Be Used as Cemetery

The County Court Monday entered into an agreement with Hugo Felix of Kansas City for the purchase of 30 acres of land off the County Farm, the tract to be in the form of a rectangle and front on Highway 61 about 70 rods. The presiding judge, Wm. J. Kies, and Prosecuting Attorney S.P. Dalton are to handle the proposition for the county.

The purchase price agreed upon is $3000, of which $1500 is to be paid in cash when a warranty deed is to be executed for the west one-third of the tract, and three notes for $500 each are to be given for the rest of the purchase price, one note payable each year for three years, and upon the payment of each $500 note, a warranty deed for five acres is to be executed. Meanwhile the assets of the company to be organized are to stand as security for the unpaid balance.

Dedicatory Exercises for Tower at Cemetery

The formal dedication of "The Tower of Memories" at Memorial Park Cemetery, on Highway 61, Sunday afternoon was attended by about 1500 persons. The ceremony was brief, but impressive, Sen. Russell L. Dearmont standing on a flag-draped stand in front of the high stone tower and delivering an address.

It is fitting, he said, that the spot, one of the highest in Cape Girardeau County, should be dedicated to cemetery use. He pointed out that the cemetery was a thing of beauty with its carefully plotted landscaping and attractive trees, shrubs and flowers. The tall 57-foot tower is a fitting monument to the memories of the departed, he said, adding that it was built of native stone.

Following his address a concert was given by the celeste-vox, an instrument recording chimes and vibra-harp music and reproduced by means of amplifiers at the top of the tower. The music could be heard a mile from the tower, yet gave a mellowed tone close by.

To date 36 persons have been buried in the new park, and about 550 lots have been sold. The cemetery is a contrast to the conventional burial ground, in that no tombstones are used, but attractive bronze plates lying flat on the ground designate the graves. Appointments of the park were explained by attendants and Dr. Hugo Felix, president of the organization constructing it.

In 1951, the major portion of stock in Memorial Park was transferred to Raymond Strom, manager of the cemetery development program. Strom purchased the interest of Dr. Hugo Felix, founder and president, who had died earlier that year.

In 1985, the Ted Strom family sold the park to Walter Joe and Iris Ford of Ford & Sons Funeral Home.