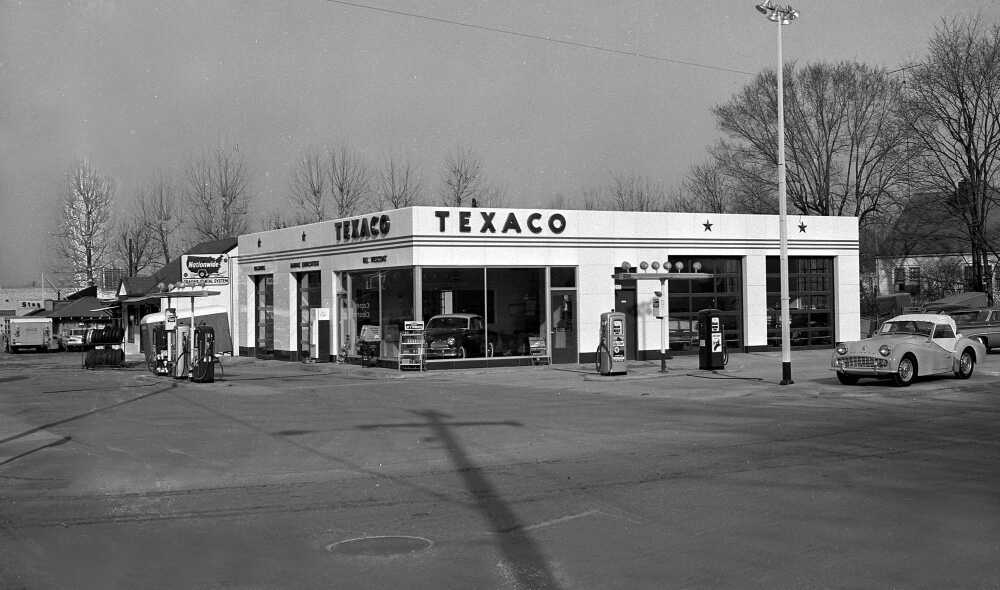 Wescoat Motor Co. & Service Station has a new look. During the past year an extensive remodeling program took place and at its completion was born the most modern looking Texaco Service Station in this area. The latest in equipment was installed for the servicing of all makes and models of automobiles. We are the oldest Foreign Car Dealership in southeast Missouri.

Before you buy any compact car be sure to come to Wescoat Motor Co. We will offer you a deal that is fair in every way...plus an automobile that gives you the utmost in economy and performance. The Studebaker Lark, Volvo and Triumph are noted for the expert craftsmanship that is put into the building of each. Dollar for dollar you can't go wrong when you trade with Wescoat Motor Co.

Here is a picture of the company's used car lot across from the service station:

The Board of Adjustment will consider application of Wm. H. Wescoat Jr., for permit to erect an addition, 66 by 31 feet, to the east side of the Wescoat service station, Perry and Broadway. The room would be used as an auto sales and display space.

Mr. Wescoat has been awarded the franchise rights for sale of the new Tucker automobile. He said today that the manufacturers hope to have the car on sale within the next three to four months. Construction of the show room, if the application is granted, might begin within 30 days. Mr. Wescoat plans to go to Chicago early next week to tour the Tucker plant.

The Tucker 48 (named after its model year) was an advanced automobile conceived by Preston Tucker and briefly produced in Chicago in 1948. Only 51 cars were made before the company folded on March 3, 1949, due to negative publicity initiated by the news media, a Securities and Exchange Commission investigation and a heavily publicized stock fraud trial (in which allegations were proven baseless in court with a full acquittal).

"My dad and my cousin (W.A. Swink, Wescoat's partner in the Tucker dealership), somehow, got a Tucker car in Cape Girardeau before Preston Tucker was forced out of business. I got to sit in the back seat, the passenger's seat, the driver's seat, you know, I was just a kid then and it was exciting to be in a car that was drawing that much attention. They displayed the car at the Arena Building in Arena Park. I guess that was in 1947 or '48."

John Wescoat, a brother of W.H. Wescoat Jr., said, "My brother bought an agency to sell the Tucker automobile. It sparked a lot of local interest and many bought stock in the company. But when the company went under it left a bad taste in everyone's mouth."

In 1966 Wescoat Motor Co. was awarded a Toyota Motor Co. franchise. William Wescoat Jr. operated the business until his retirement in 1978 when he sold the franchise to a group. The dealership was moved to south Kingshighway in 1981.