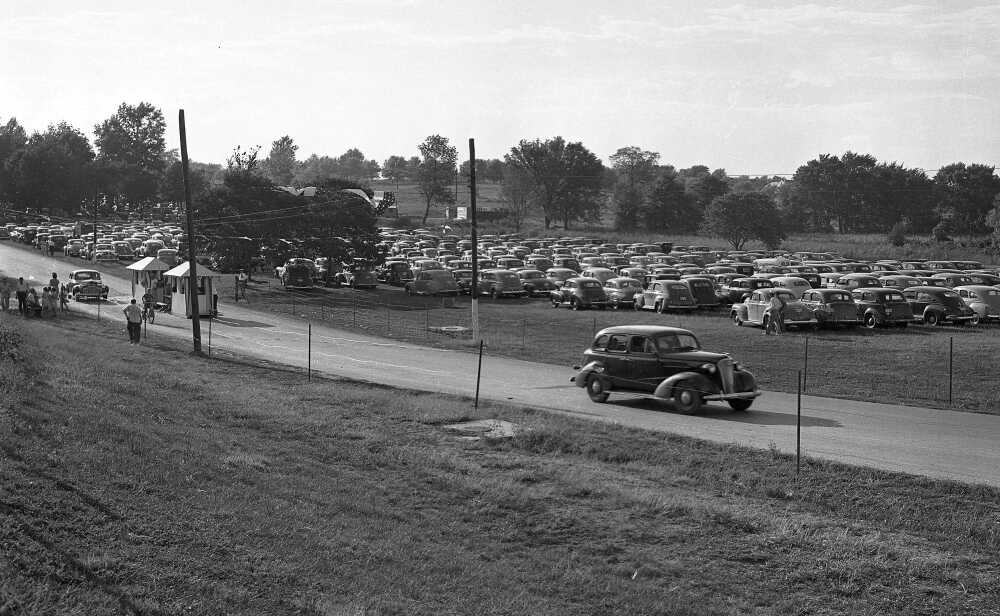 The automobiles parked for the SEMO District Fair at Arena Park appear to be from the late 1930s in this undated photo by G.D. Fronabarger.

The SEMO District Fair resumed in 1940 after a break of 11 years as the 72nd fair of the series. The new Arena Park became the site for the fair.

Parking of automobiles at the new city park during the Southeast Missouri District Fair next week won't be a problem, as far as numbers are concerned. Fair officials estimated today they would be able to park all the cars that come to the fair on any one day in the grounds, providing there are no more than 4000 of them.

"We will be able to park at least 4000 cars on the ground at one time," H.V. Beal, assistant fair manager, said. A charge of 25 cents is to be made on all cars entering the park, this including parking space. Specific areas for parking have been designated.

The largest area will be on the field inside the half-mile track, east of the grandstand. Mr. Beal estimated that about 3000 cars could be parked in this area. The parking will be supervised by city police and members of the Louis K. Juden post of the American Legion, who have offered their services as special police during fair week to assist in policing the grounds and handling traffic. The fair board also will employ several special police. Cars will be kept well away from the race track fence in order to follow the progress of the races all around the track.

Other parking areas are on unwooded spaces in the north, northwest and extreme east sides of the park. About 1000 cars can be parked on these sites, Mr. Beal estimated. There is considerable space on the north side of the main entrance drive, leading from Highway 61 into the park, and there is another small lot in the extreme northwest corner of the grounds. Some space is available on the east side of the park, east of the race track, enough to accommodate about 200 cars.