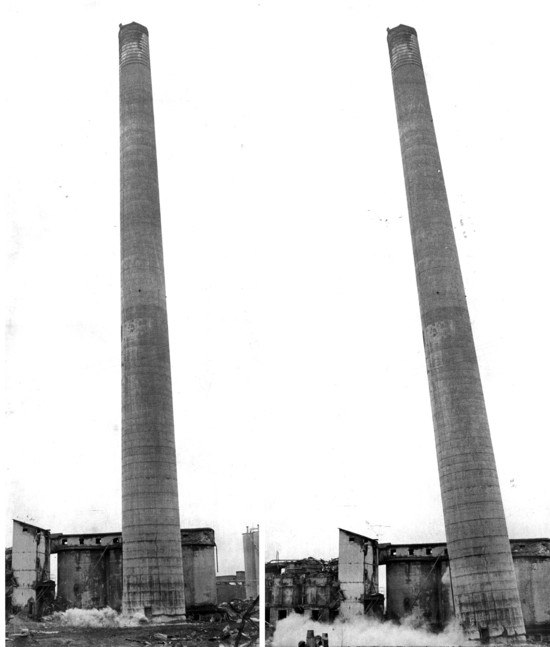 The old Marquette Cement Co. smokestack, built in 1936, was demolished Dec. 30, 1974 by Custodis Construction Co. of Chicago, the same company that had built it. Top left, the explosives are detonated at its base. Top right, the structure begins its fall to the ground. Center, the chimney hits with a thunderous crash. At bottom, a cloud of dust rises from the felled giant. The smokestack was both a historical and visual landmark in the city. (Missourian photos by Gordon L. McBride)

Cape Girardeau may not be a Cape Kennedy, but you would have to travel far and wide to match the excitement of watching the detonation of the old Marquette Cement Co. smokestack on South Sprigg Monday.

In fact, the toppling structure reminded onlookers of a rocket that had failed to liftoff. The smokestack fell after days of work by a demolition team from Custodis construction Co., Chicago, Ill.

Jack Quigley, who has been with the company for over 50 years, and personally climbed many a smokestack, lit the fuse to the dynamite in the 350-foot chimney. Twenty seconds later, an explosion ripped the old monument from its pedestal.

The smokestack crumbled and toppled over. Large clouds of dust obstructed the view when the smokestack hit the ground. However, when the dust cleared it was evident that the mission had been accomplished.

Sticks of dynamite had been placed inside eight timbers that had been worked under the base of the smokestack, Will Gundermann, head of the demolition team, said. These timbers, he said, supported the entire weight of the structure, so that with the blast, the timbers were blown out, allowing the structure to fall.

The smokestack had been a landmark in the Cape Girardeau area ever since its construction in 1936. It had been part of the old dry-processing plant that eventually became not only obsolete but a polluter. It was closed Nov. 30, 1969, when Marquette converted to a wet-processing system which has helped bolster production over the past few years.

The detonation team had been working on the structure since Thursday, Mr. Guntermann said. There was much careful work in preparation for the detonation as the team not only had to work the timbers under one section of the base, but they had to cut an arc around the base of the steel-reinforced concrete chimney with jackhammers and blowtorches, he said.

Joseph F. Gambill, Marquette plant manager, quickly congratulated Mr. Guntermann and the team after the smokestack had fallen. He praised the leader for a job "well done."

There had been some discussion among the spectators--plant personnel and the team alike--as to just how the structure would fall. Mr. Gambill had said that because of the reinforced concrete the structure would "split like a melon." Mr. Guntermann himself was uncertain what would happen saying that it would probably take a minute or so for the structure to topple after the blast.

"Each chimney is different," he explained.

However, as soon as the explosives detonated the smokestack came down. It landed far short of the adjacent railroad tracks and pipeline. The top and bottom had been turned to mere dust while the solid middle section lay crushed but still together.

Both the construction crew, which has been servicing the chimney for an unknown number of years, and the plant personnel were visably pleased at the results. Mr. Quigley added a touch of humor when he said: "I'm disappointed. We missed the target by three feet."

Mr. Gambill added that the other sections of the old plant would be destroyed within the next 45 days. Most of the buildings and equipment are being dismantled while the group of storage silos sitting behind the old smokestack will have to be demolished, he said.

The smokestack was built by the same company with excavation beginning May 14, 1936.