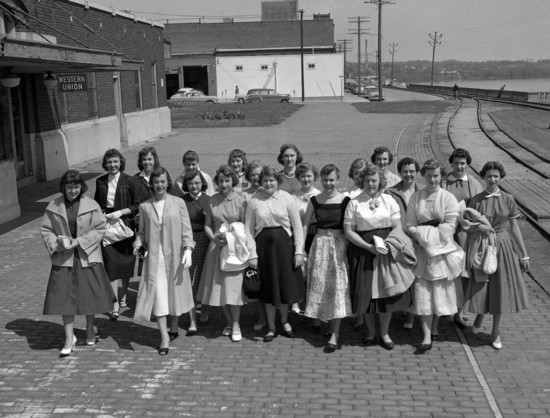 Like countless others have done through the years, high school pupils attending the Choral Festival Friday lost no time in getting downtown so they could see the Mississippi River. To many of them it was their first sight of the Father of Waters; others had seen it before, but wanted to see it again. It won't be long, however, when the sight they enjoyed yesterday will be shut off to them, and to other visitors since a 15-foot concrete wall is to be erected along the stream for flood control purposes. The picture shows a group of girls from Benton, including Janet Dirnberger, Sally Watkins, Norma Burford, Nadine Burger, Georgia Kirn, Rose Westrich, Janie Brock, Pat Glastetter, Nancy Dennis, Ann Ferrell, Janis Urhahn, Delores Gibbar, Anna Marie MacGregor, Margaret Gibbar, Angela Kluesner, Elaine and Delores Hillman, Marilyn Winders, Rosalie Bollinger and Loretta Ratledge. (G.D. Fronabarger photo) 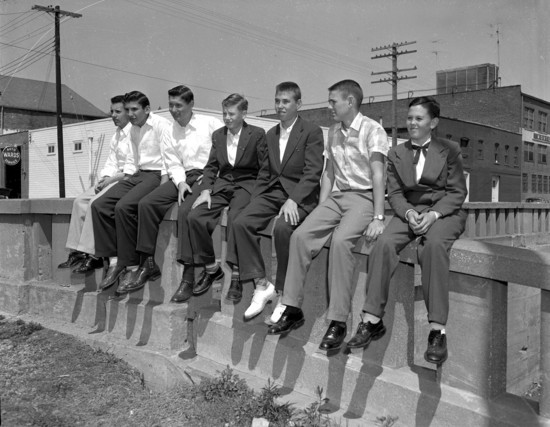 These boys from Malden who attended the Choral Festival sit on the seawall to rest while they look. From the left, Dewayne Uthoff, Donald Hinze, Dick Rice, Billy Carrel, Thomas Boner, Ronald Culp and Carol Fitzpatrick.