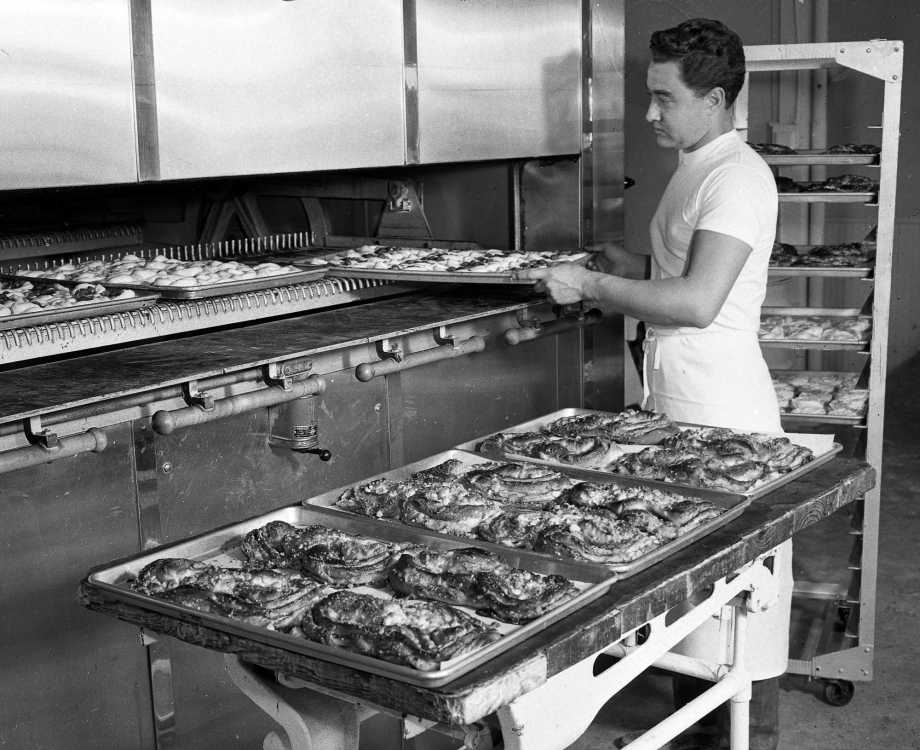 Before Wille's Bakery opened in Cape Girardeau, Leonard Wille was photographed years earlier while working at Wagner's Bakery in Jackson by G.D. Fronabarger.

The days start early for Leonard Wille, owner of Wille's Bakery at 1001 Independence. He and his son Ralph are at work by 2:30 a.m., six days a week, preparing pastries for their customers.

Mr. Wille has been in business in Cape Girardeau for four years. Before that, he spent 33 years working for Wagner's Bakery in Jackson. "I just came up through the ranks," he said.

He enjoys his job. "After you've been in it as long as I have, you almost have to stay. You don't know anything else," he said. What he enjoys most is decorating the cakes. He estimates that he and his son prepare 100 to 150 cakes each week. "I enjoy all of it except the hours," he said.

Everything the Willes prepare is made "from scratch." "We don't buy anything prepared," he said. He steam-cooks all the fruit for fillings in a boiler. He has a pizza machine which he uses for pies which can turn out a finished pie, ready for baking, in about a minute.

The most popular pastries at Wille's Bakery are Yum-yums (a Danish doughnut) and cream horns, Mr. Wille said. Mrs. Mary Wille, Leonard's wife, said she enjoys meeting the people who come in. "You get to the point where you almost know their orders," she said.

The Willes have plans to do some remodeling this summer. Mr. Wille wants to paint and install some new floors.

Everything usually runs smoothly for Mr. Wille. Many of his cakes and much of the dough for the next day is prepared and tucked away in a walk-in cooler where it will be ready when he needs it.

One embarrassing moment that he remembered with a smile was when a woman once stopped by to pick up a wedding cake. Mr. Wille was carrying it out to her and the cardboard bottom collapsed, the cake dropped and Mr. Wille caught it in his hands, but "messed it up," he said.

The woman had 30 minutes before the cake has to be at the wedding, so Mr. Wille went into high gear, and in that half hour, redid the icing on the cake. "The cake itself was all right," he said, "but the icing had to be completely redone."