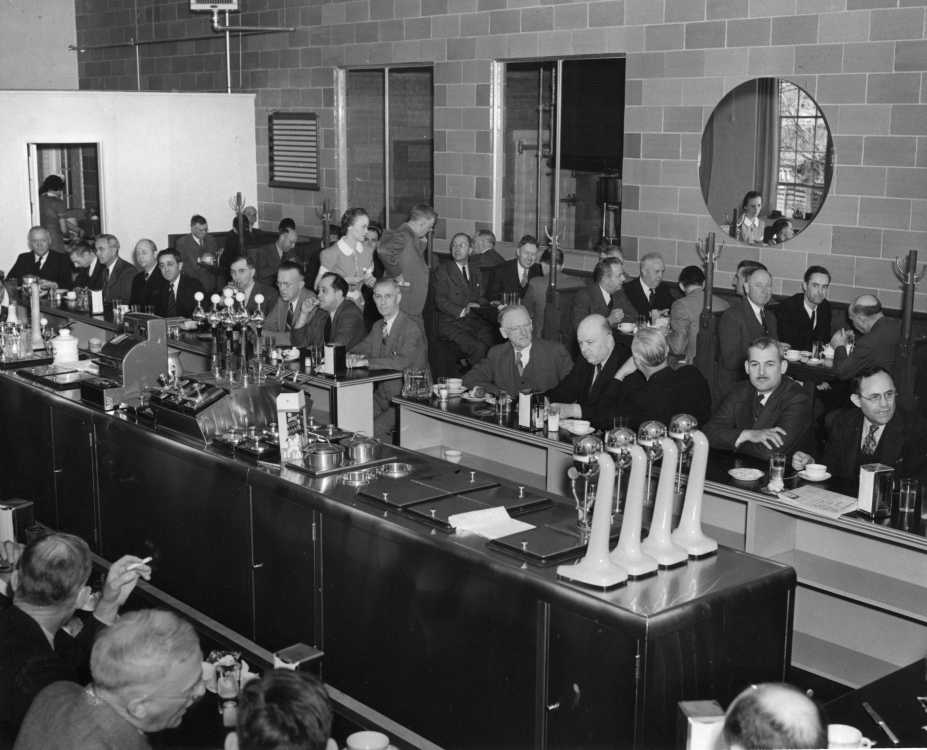 The Rotary Club held its weekly luncheon meeting on April 14, 1941 in the new retail department of the Sunny Hill Dairy Farm's new plant at 43 S. Boulevard. Members were guests of Louis Blattner, co-partner with his brother, Charles Blattner, in the firm, and a member of the club. This was the first meal served in the spacious modern new plant. (G.D. Fronabarger photo)

Members of the Rotary Club held their regular weekly meeting Monday at the new plant of the Sunny Hill Dairy Farms Co., South Boulevard and Merriwether street, the meal served them being the first food prepared in the new establishment which will have its formal opening soon and will feature a new type of retail service in the community.

Sixty-two members and guests were in attendance, Congressman Orville Zimmerman of Kennett and John S. Lilly of St. Louis, a former Girardean, being among those present. Harold C. Chancellor, manager of the Hotel Idan-Ha, was received as a new member.

The program was furnished by Louis C. Blattner who, with his brother, Charles F. Blattner, operates the dairy firm. Mr. Blattner told of the firm's organization in 1915 and traced its development.

By the spring of 1916 the company had 20 cows and for several years raw milk only was sold. In 1930 pasteurizing equipment was purchased and now completely new equipment has been installed, bringing in the homogenizing process and permitting the manufacture of ice cream in addition to the other regular line of dairy products. The firm moved recently from 245 South Frederick street. Prior to 1930 the company was located on South Middle street.

Mr. Blattner traced the expansion of the plant, explaining how his firm is endeavoring to keep pace with the community's growth and demands of the times. The new retail quarters, very attractive, for the serving of ice cream, soft drinks, sandwiches and the like is an additional service of the company. Members of the club were taken on a tour of the plant.

Attention was called by H.I. Himmelberger, president, to the district conference in Columbia next Monday and Tuesday. R. E. L. Lamkin, incoming president of the club, and W. E. Walker will go as the club delegatess. Dr. A. C. Magill, secretary, and E. L. Markham were named as alternates.

Here is a previous blog with a photo of the Sunny Hill Dairy truck fleet.

Here is a previous blog with a later photo of the Sunny Hill Restaurant.