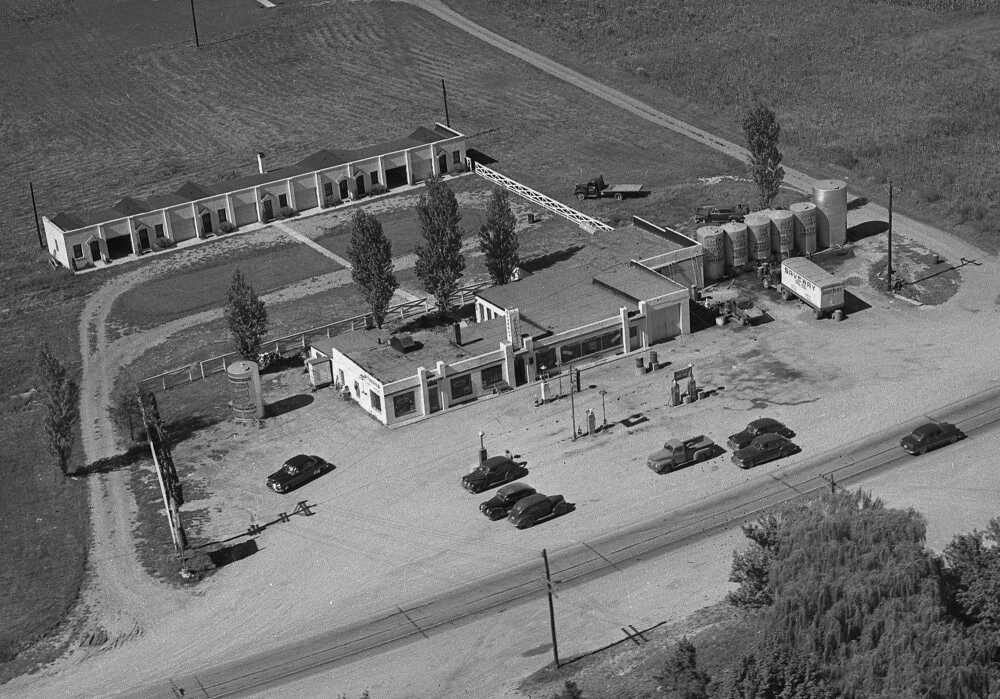 G.D. Fronabarger shot this aerial photo of the Saveway Oil Co. and Motor Courts at Scott City sometime before the company was uprooted by the new interstate highway in 1962. He wrote this story for the Achievement Edition:

SCOTT CITY -- The Saveway Oil Co., a home-grown business, was relocated by the Interstate 55 interchange and had to move to new quarters, expanding and improving its operation in the process.

The president, Harley Estes, said "it cost us a lot of money, but we have things the way we want them now."

Saveway is a distributor of petroleum and allied automotive products to service stations and wholesalers.

Its products include most major brands of motor oil plus tires, batteries and gasoline.

The new quarters are in the old and previously abandoned Cotton Belt Railroad boxcar repair shed.

This is a huge barn-like structure which Mr. Estes said was nothing more "than a shell" when his firm purchased it.

The building was reworked -- a floor was put in and the exterior painted as examples -- and now serves as a warehouse for the large stock of materials.

New office spaces were added to the front and a new building for recapping tires was built to the east of the old structure.

The move from the highway to the old Cotton Belt quarters increased and consolidated the company's warehousing operation, Mr. Estes said.

The recapping phase is also larger now, he said.

The company supplies gasoline and the other products to about 50 Saveway and Derby service stations in southeast Missouri and Southern Illinois.

Mr. Estes previously worked for another oil company and started his own business at Scott City more than 20 years ago.

Saveway was started back in 1949 by the late Harley Estes and now has 28 service station locations in southeast Missouri, southern Illinois and northeast Arkansas. James H. Estes is president and his brother, Jerry, is vice president. Company offices, formerly at Scott City, were moved to 120 Broadway in June, 1973.

The Saveway Coffee Cup, a part of the Saveway Service Station at Ancell, will be completely remodeled soon. New Equipment and fixtures will be installed about May 1.

Mrs. Nan Frazier, who has been staying at the Saveway Motor Courts the past month, returned to her home in Dallas, Tex., Sunday night. Mrs. Frazier has been the accompanist for the Comer Revival held in Benton and Commerce.