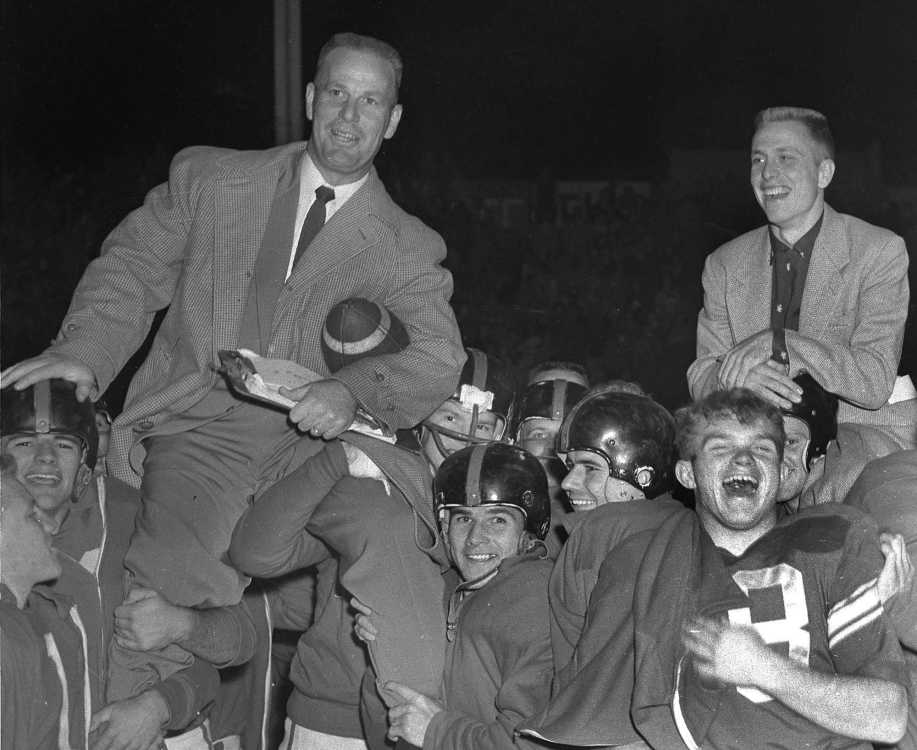 Not a worry. Coach Ken Knox, at left and high, is pleased. He still has all the tools of the trade with him. The shot was made, of course, as the State College game ended Saturday night in the Stadium, and Cape wrapped up the M.I.A.A. flag by trouncing Kirksville. Also elevated by the players is assistant to Knox, Ralph Harrison. There is no worry for him, either, for the moment. The score was 39-14. (Photo by G.D. Fronabarger)

Undefeated Season for State After Crushing Delta, 24 to 7

A rock-'em, sock-'em band of Cape State Indians, starving for their first undefeated, untied season in 18 long years, smashed their way into the crumbling defenses of a proud Delta State College powerhouse Saturday night to a crushing 24 to 7 victory that was awesome in its thoroughness.

Not since 1937 had a Cape State College team tasted the invigorating tang of an untainted season. In fact, that was the only time in a football history that goes way back beyond the turn of the century.

In 1946 another team of Indians went undefeated, but there was a single tie game--the first of the season--in that string of victories. Now the Braves of Coach Kenny Knox, doing himself proud in his fourth season at the helm of the Indian canoe, have nine straight games in their war bonnets.

It was a spectacular game in many ways, and the 150 faithful fans who made the 300 mile journey--perhaps the greatest following in team history--were treated to a tremendous climax to a great football season.

Larry Yeargain, the Indians' great quarterback, did a magnificent job of team direction. Tom Brennecke, the wing-footed sophomore halfback, scooted in unbelievable bursts of speed and power. Ed Yonkus, using the draw series for every ounce it was worth, was supurb. Little Bobby Hoffman was a titan among the giants on the field.

Endman John Schneider was his usual sure, confident self, a thorn all evening to the Statesmen. Big Jim Lohr played his tackle position like a demon all night. Gene Gladstone was anchor who wouldn't be moved at guard. J. Lynn Mackey showed why he is already the choice for first M.I.A.A. center next year. Don Calvert was a rock who stood fast on defense and moved on offense. Everett "Bud" Aubuchon dished out more than Delta could take and helped open the gaping holes for the fleet Indian backs. Howard Reed was a pillar on defense and offensive power.

Knox was head football coach and athletics director at Southeast from 1952-1967. His football teams won six Missouri Intercollegiate Athletic Association championships. Knox' 1955 team was undefeated and untied. He was inducted into the Southeast Missouri Athletics Hall of Fame in 2002.