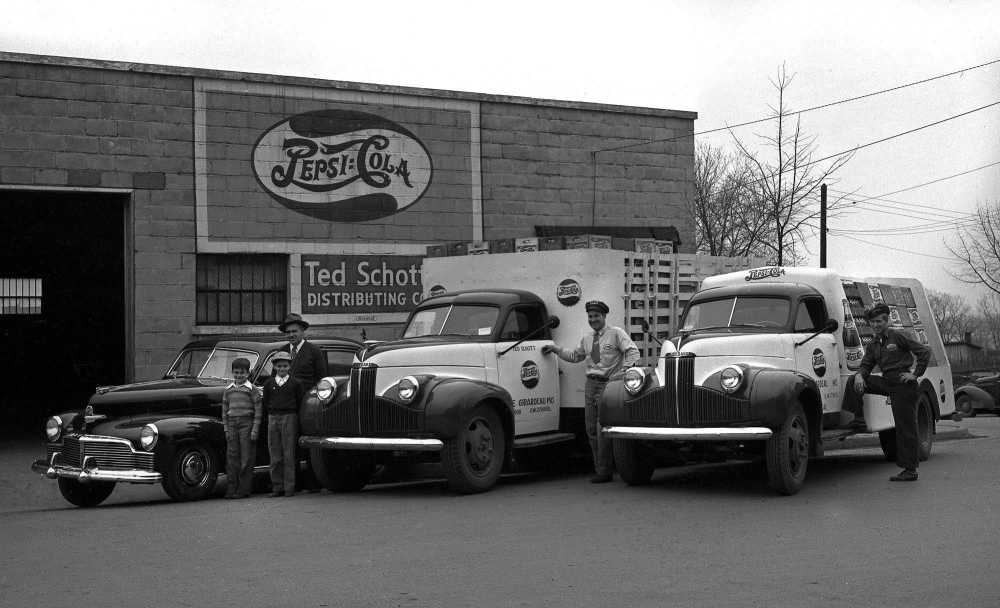 This picture by G.D. Fronabarger was taken at the Ted Schott Distributing Co. which sold Pepsi-Cola products in the Cape Girardeau area. The names and date are unknown.

Construction is underway on a concrete block building on South Middle street, on the old Cape Brewing Co. property, which will house a distributing plant for the Pepsi-Cola Bottling Co. The structure is being erected by the owner, Southeast Missouri Lumber Co., and plans are to have it in service by July 1.

The structure has been leased by Ted Schott of Perryville and will serve as a distributing center for the products in the Cape Girardeau and adjacent territory. The building is 60 feet long and 44 feet wide.

About 40 years ago Ted Schott and his sons opened a soft drink distributorship in the old Cauble and Field building in downtown Cape Girardeau.

Schott would often take his entire fleet of vehicles (two trucks and the family car) up to the bottler at Perryville to pick up his supplies of Pepsi. Tubs filled with ice would keep the soft drink cold in the stores, and when he ran out, Schott would have to go back to Perryville to get more Pepsi-Cola and Dr. Pepper to sell.

Oh, how the times have changed!

From that hard working, slow moving, open-sided set of trucks in 1947, the Cape Girardeau Pepsi Bottlers, Inc. have grown incredibly.

Bruce Jateff is the general manager of the Cape Girardeau distributorship. Rather than running up to Perryville to get what he hopes is enough Pepsi to sell between Lutesville-Marble Hill and Benton, Jateff keeps a 150,000-square-foot warehouse full of the soft drink, and passes it on to chain stores and automated machines throughout a five-county area.

When the Schott company became Capaha Bottlers in 1968, to try and provide a more available supply of soft drinks to Southeast Missouri, they erected the building that now houses the distributorship, but still did much of their delivery on coal trucks, Jateff says. However, since 1976, when the corporate office in Marion, Ill. took over and formed Cape Girardeau Pepsi Bottlers at that location, such methods have been insufficient.