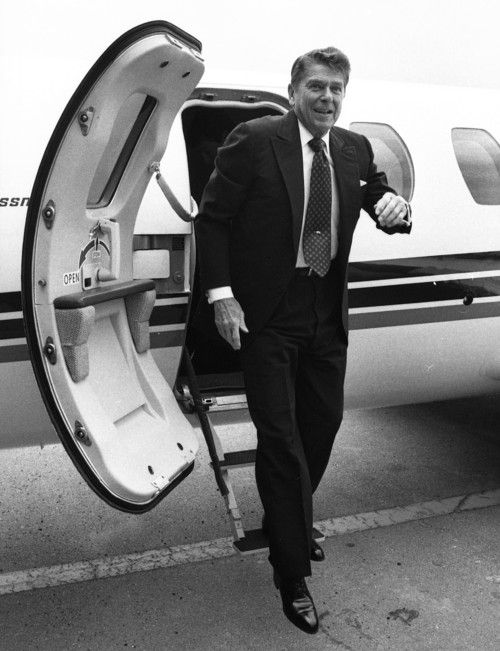 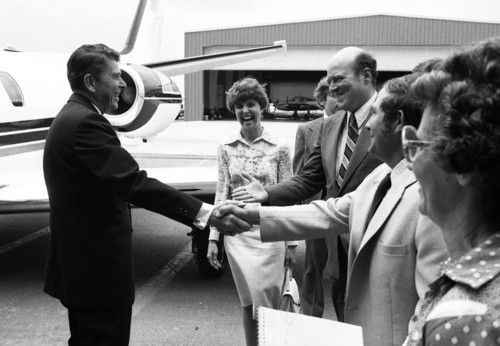 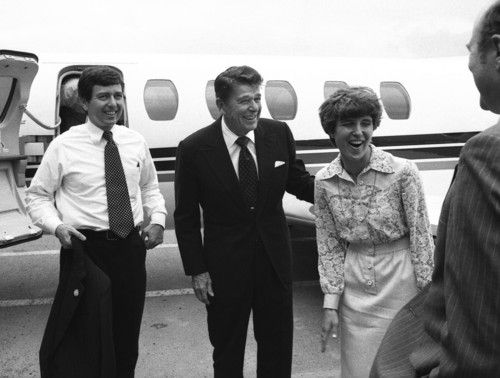 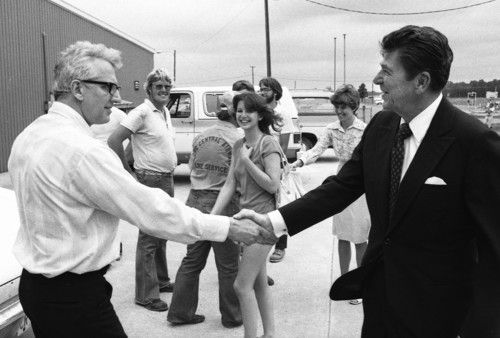 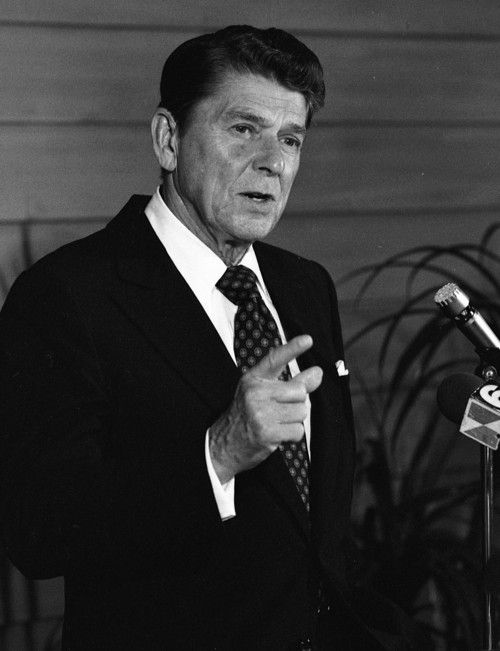 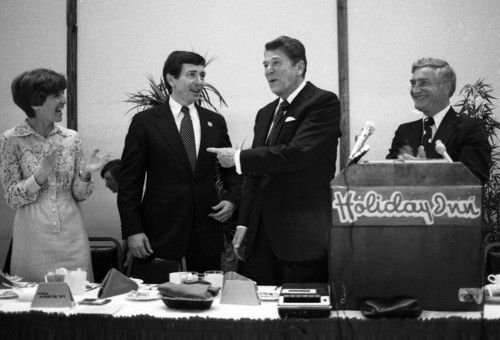 Mr. Reagan banters with Mr. Ashcroft at the fund-raising dinner for the attorney general. Mrs. Ashcroft is at left and Robert F. Hemperley, Cape County Republican chairman and master of ceremonies, is at right. 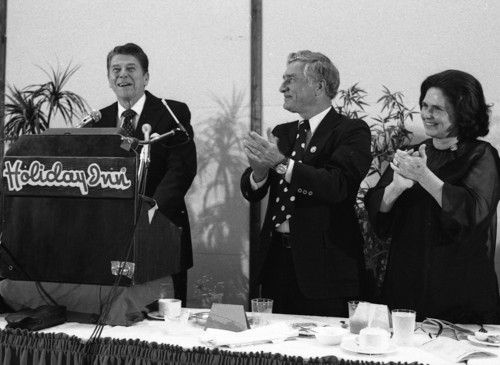 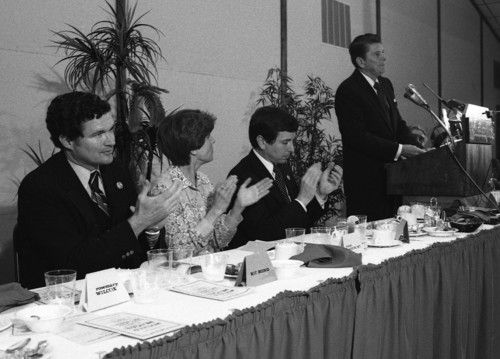 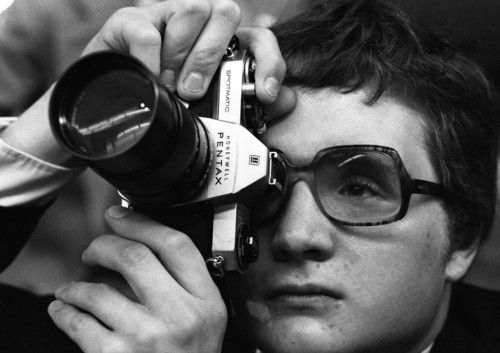 The targets of the verbal barrage were bureaucrats and Democrats.

The weapons include a formidable array of statistics, mixed with sharply-pointed barbs.

The audience was a partisan Republican gathering in Cape Girardeau.

And the speaker was former California Gov. Ronald Reagan.

To the repeated applause of the 700-plus persons who paid $25 or $100 a plate at the Holiday Inn Racquet Club Wednesday night to hear the potential presidential candidate, Mr. Reagan zeroed in on one basic theme: Government is not the answer to our problems; government IS the problem.

Mr. Reagan sounded a note of optimism about the party.

"For 42 of the last 46 years, our opponents have controlled both houses of Congress. They can't deny their responsibility for this bureaucratic monstrosity," he said.

The speaker cited these examples of the growth of government's regulatory powers:

--The Department of Energy has an annual budget equal to the profits of the 10 largest oil companies. "That agency has never produced a quart of oil," Mr. Reagan commented.

--Hospitals are regulated by 164 federal agencies, adding $35 a day to the cost of health care. "And the Democrats want the government to run the entire health care system."

--The Occupational Safety and Health Administration (OSHA) has 144 rules for climbing a ladder.

"No one in Washington knows how many government programs there are," Mr. Reagan told his audience. "But they go right on enacting miracle cures for which there is no known disease."

Mr. Reagan told the gathering that the answer to the oil supply problem is to free the industry from the price restrictions and let the marketplace take over.

"The problem is not a shortage of fuel, it's a surplus of government," he said.

The speaker told of oil wells being shut down in California because it costs $6 to produce a barrel of oil that carries a government ceiling price of $5.25.

"The ironic thing is that right across the bay from those wells you can see tankers unloading oil from OPEC countries that costs $18 to $20 a barrel. If we're going to pay that, Americans might as well be getting it," Mr. Reagan remarked.

Mr. Reagan criticized President Carter on a number of points.

"Do you sometimes get the idea that the American Revolution was the last one fought without Cuban intervention?" he quipped.

Mr. Reagan took a shot at welfare as it is carried out under the supervision of the Department of Health, Education and Welfare. He said if the $160 billion in expenditures for programs for poverty level families had been distributed to those families, each one wold have received $27,000 last year.

Mr. Reagan took issue with the common image of the GOP as the party of big business and the rich.

"We are the party of Main Street," he observed.

The speaker, noting that the Democratic party has traditionally courted the minorities and ethnic groups, said the Republicans do also but as Americans, not as members of groups.

"Our opponents have demeaned and insulted ethnics and minorities," Mr. Reagan said.

Looking ahead, he challenged the audience to take an optimistic view. "Let's make it our task to tell our sons and daughters that the best is yet to be," Mr. Reagan urged.

At a news conference earlier, when asked who he would rather face in a presidential race, President Carter or Sen. Edward Kennedy, Mr. Reagan had this to say:

"I know the disadvantages of competing against the incumbent, but with an incumbent, you have his record to campaign against. But I believe Kennedy is more vulnerable than the polls show."

Mr. Reagan arrived at Cape Girardeau Municipal Airport about 5:30 Wednesday afternoon and left here after a reception about 10 p.m. Transportation reportedly was by the jet airplane owned by Charles N. Harris, a Cape Girardeau businessman.

Mr. Ashcroft recalled that Mr. Reagan had campaigned in Missouri for him in 1976 when he made the successful race for attorney general.