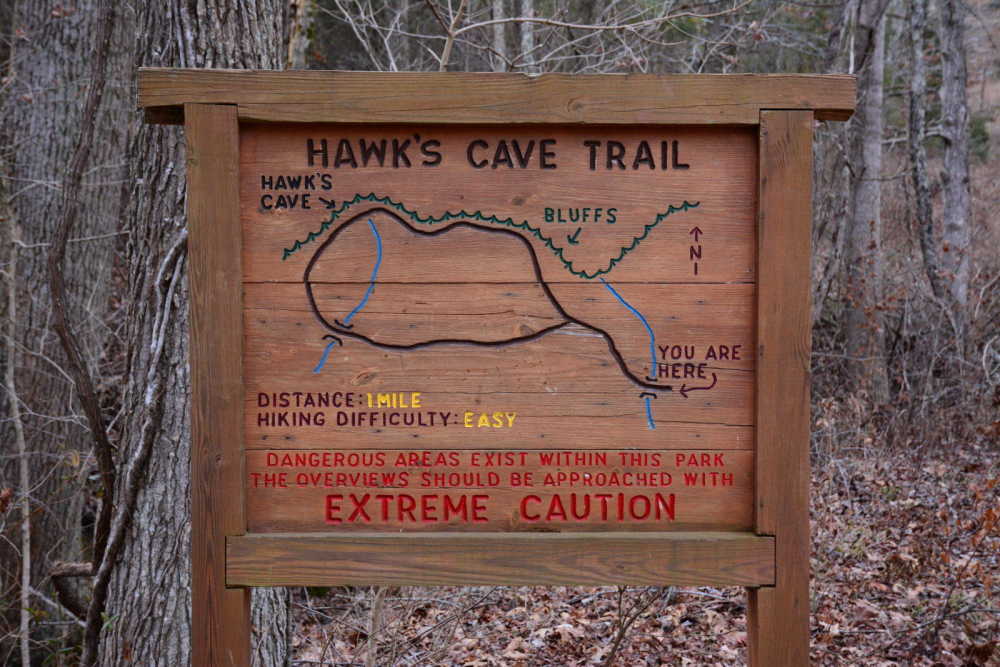 Southeast Missouri and Southern Illinois have fantastic parks and recreation areas, but some of these attractions can be quite dangerous.

This month alone has brought three deaths from accidental falls: one at Elephant Rocks in Missouri, one at Ferne Clyffe in Illinois, and another at Burden Falls in Illinois.

In recent years, fatalities have also been reported at Johnsons Shut-ins in Missouri, Bell Smith Springs in Illinois, Garden of the Gods in Illinois, and Little Grand Canyon in Illinois.

These incidents are a sobering reminder about the hazards of hiking or exploring near the tops of bluffs and rock formations.

News stories about these deaths usually include an obligatory statement from a official about the need to "be careful" and to observe basic safety precautions like wearing proper footwear, letting people know where you are going, watching your footing on wet or icy rocks, etc.

That's all fine and well, but perhaps it would be more helpful to actually call out those places that are particularly dangerous. Here are some notes about the more treacherous landmarks in the region and how best to enjoy them -- without getting hurt.

The loop trail at Little Grand Canyon is not to be trifled with. To enter and exit the main canyon, the trail follows a pair of narrow chutes filled with wet rocks that are slicker than snot. 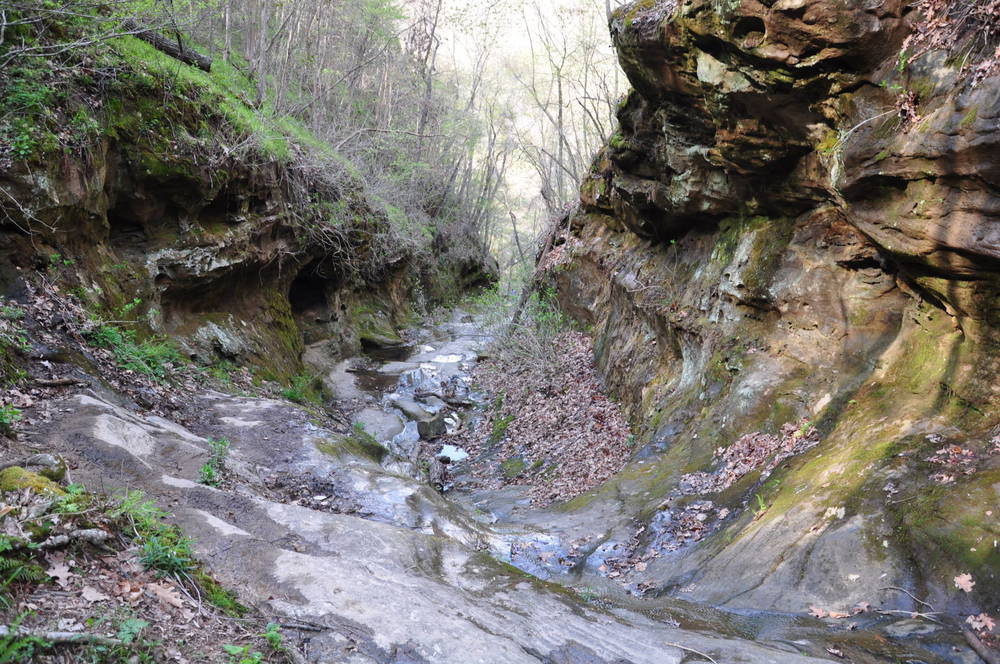 Take your time while traversing the chutes, and plan your steps carefully so that you take advantage of the footholds that have been carved into the rocks.

The western portion of the trail reaches an overlook of the canyon and the river bottoms beyond. It's a favorite photo spot. 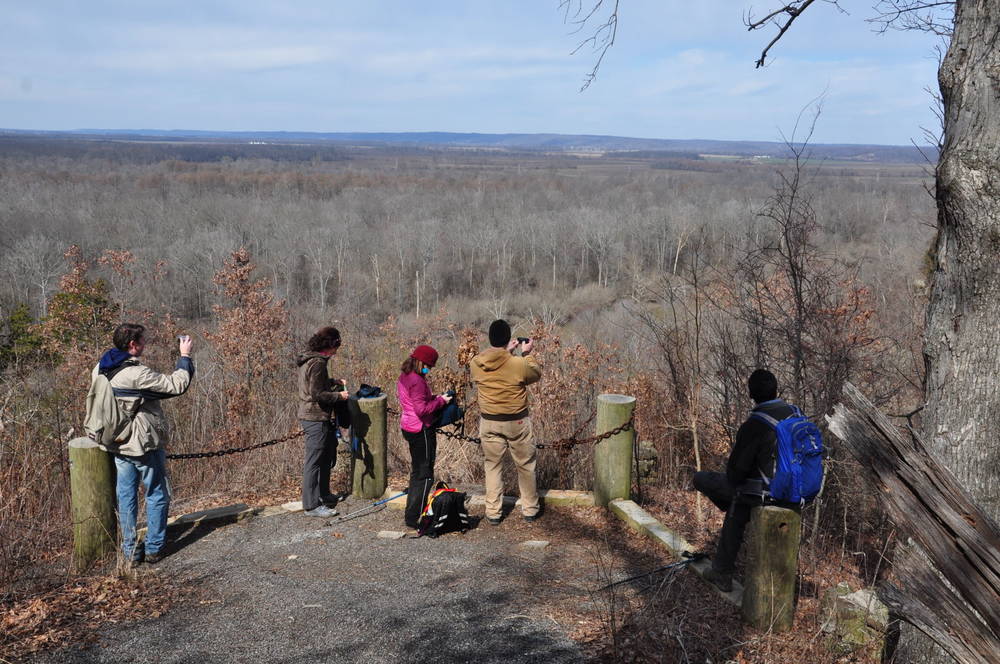 However, the overlook can be frustrating because tree branches obscure a portion of the view. So naturally visitors want to walk past the fencing. Bad idea.

Below the fenced overlook, a faint trail leads to a ledge at the top of a massive bluff. Thanks to a sort of optical illusion, the ledge is actually much narrower and steep than it first appears, making it too easy to walk right up to -- and over -- the edge. 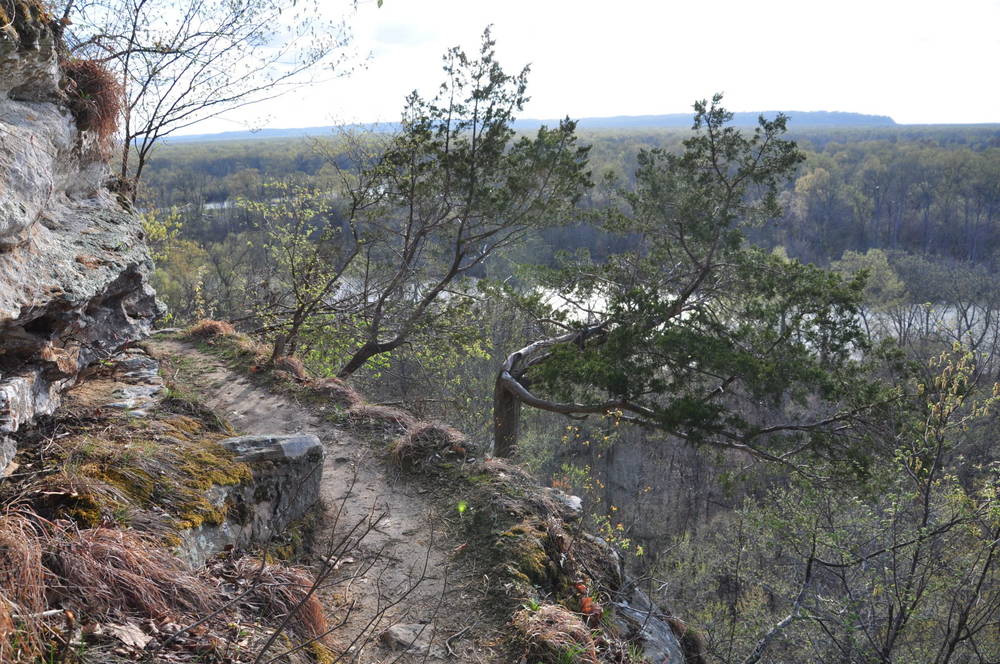 The view isn't that much better beyond the fencing anyway, so there's no reason to go there.

Garden of the Gods, Illinois

Garden of the Gods is likely the most photographed spot in Southern Illinois, and it's easy to see why. When the weather is right, the sunsets here are spectacular. 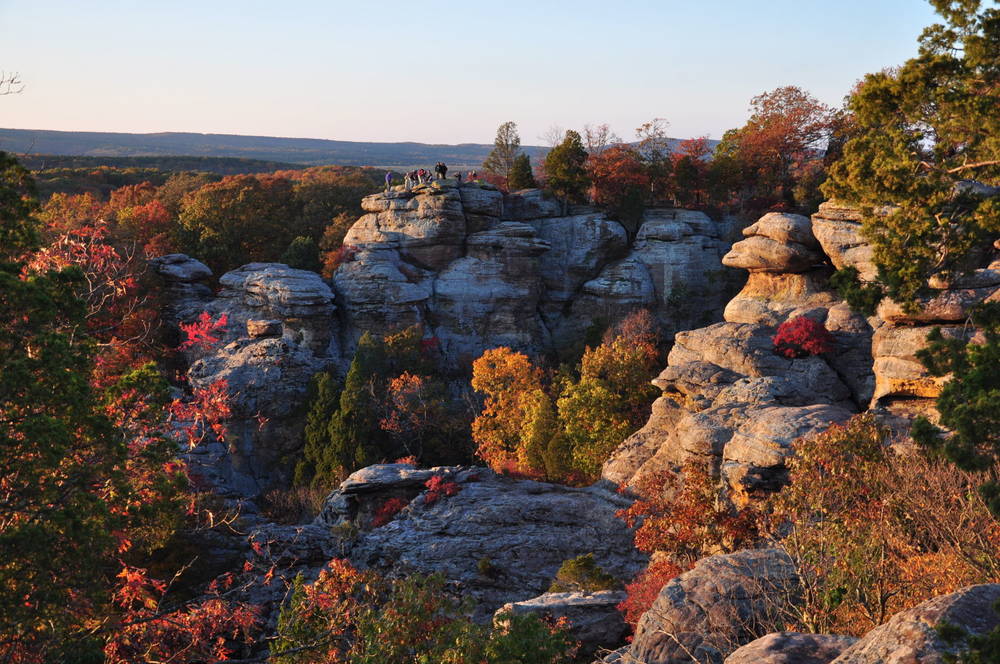 Crowds of photographers jockey for position to capture the sunsets, sometimes forcing them to set up their tripods in precarious positions on top of the rock outcrops. 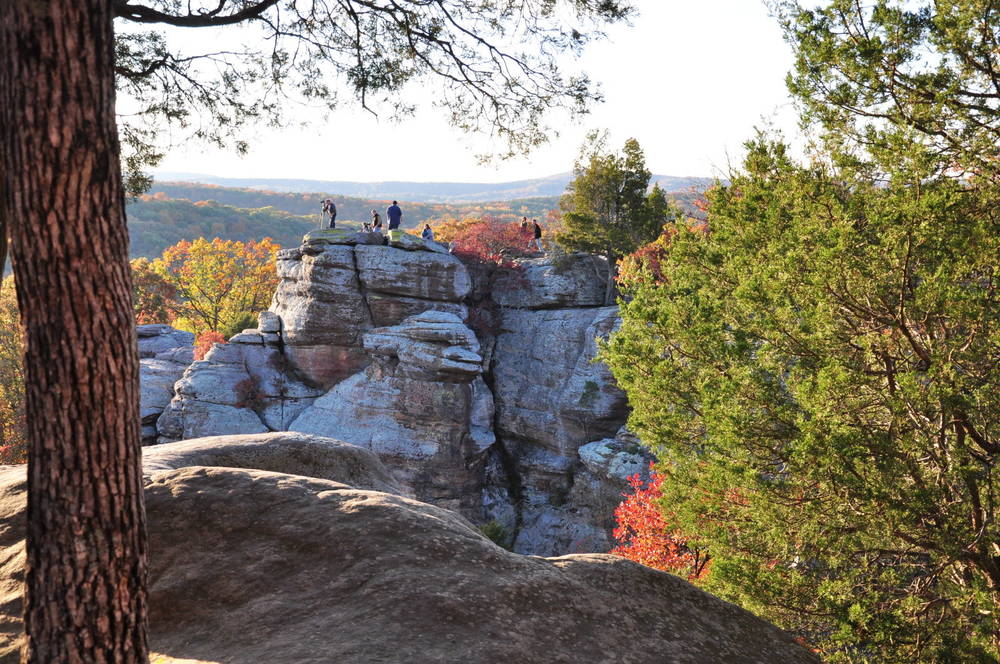 Some of these outcrops can be only be reached by jumping across deep gaps. At first glance, these gaps look easy to cross. But here too is another optical illusion. 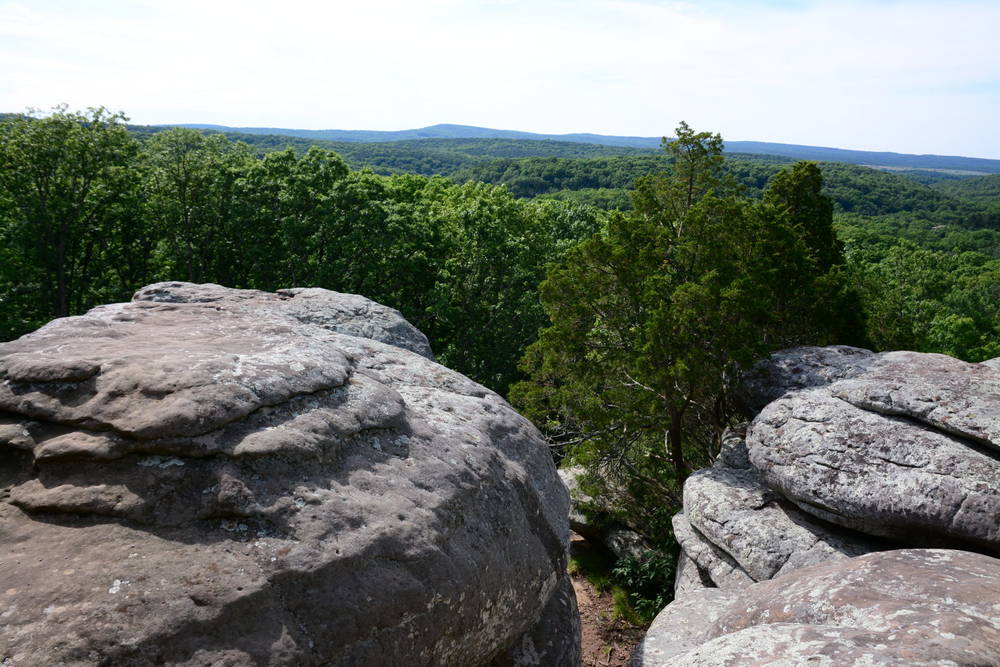 I'd recommend avoiding any place at Garden of the Gods that requires jumping.

As one of the tallest waterfalls in Illinois, everyone wants to get a good look at Burden Falls. But the view from the top isn't very impressive. 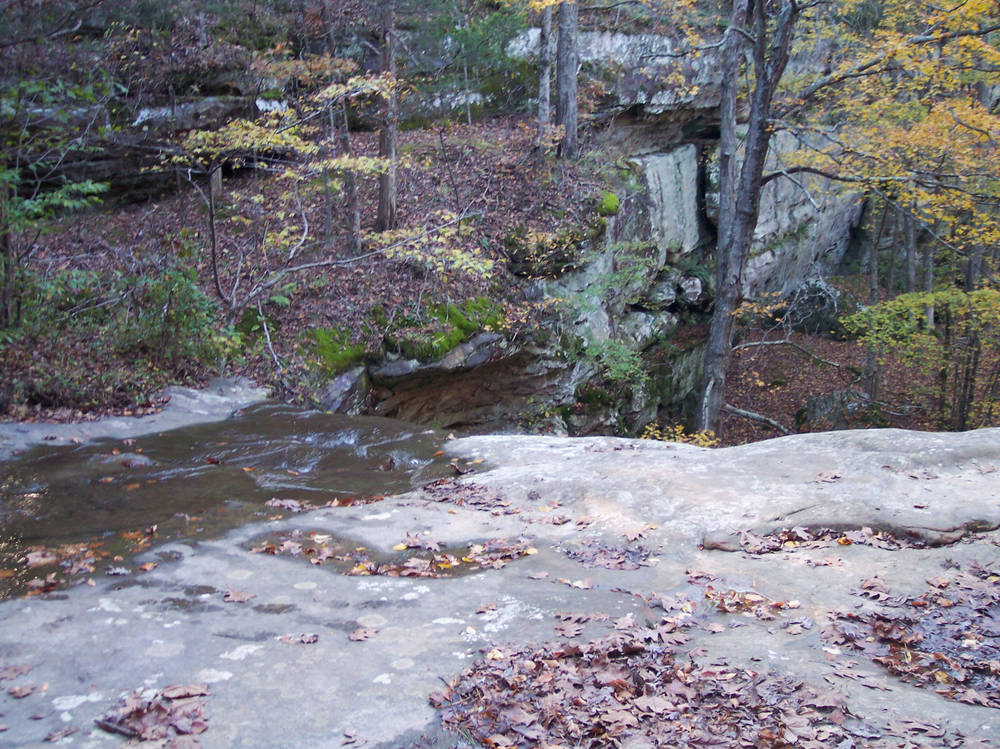 For a better view, the typical route to the bottom involves walking past the precipice of the falls, hugging a narrow ledge, and then climbing down a series of boulders. There's plenty of ways to get hurt here.

A safer option is to follow the trail that runs to the west of the falls (on the left when approaching from the parking lot). This trail eventually leads to an easier way down to the canyon floor, and from there it's a short hike back to the waterfall. 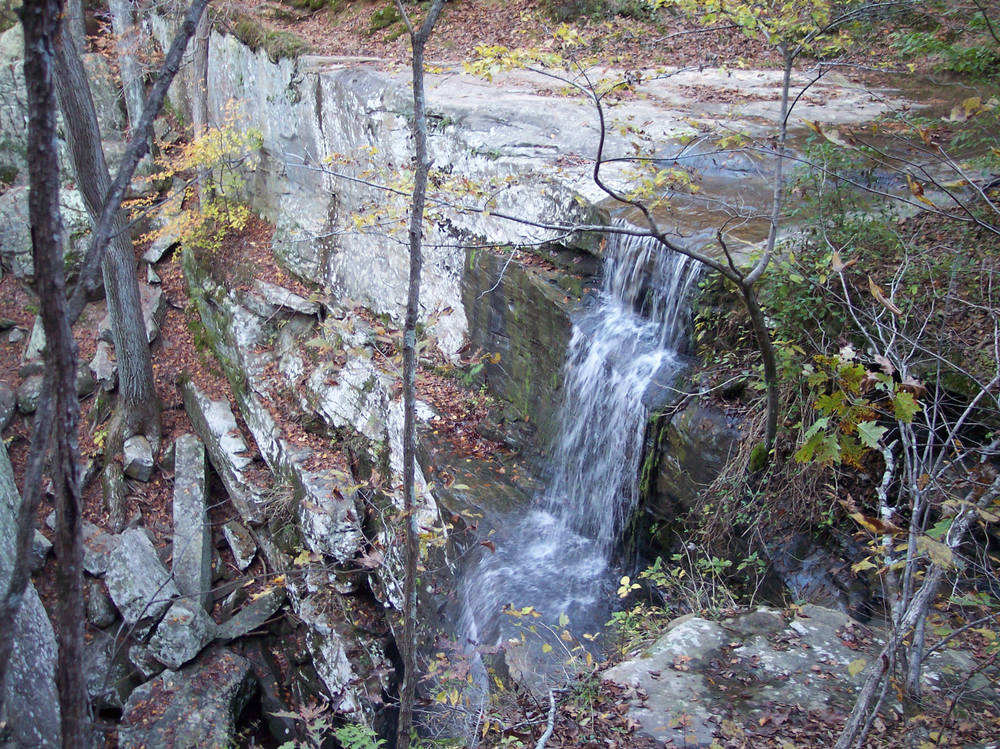 The most popular hiking destination at Ferne Clyffe State Park is the big waterfall at the end of the Big Rocky Hollow Trail. 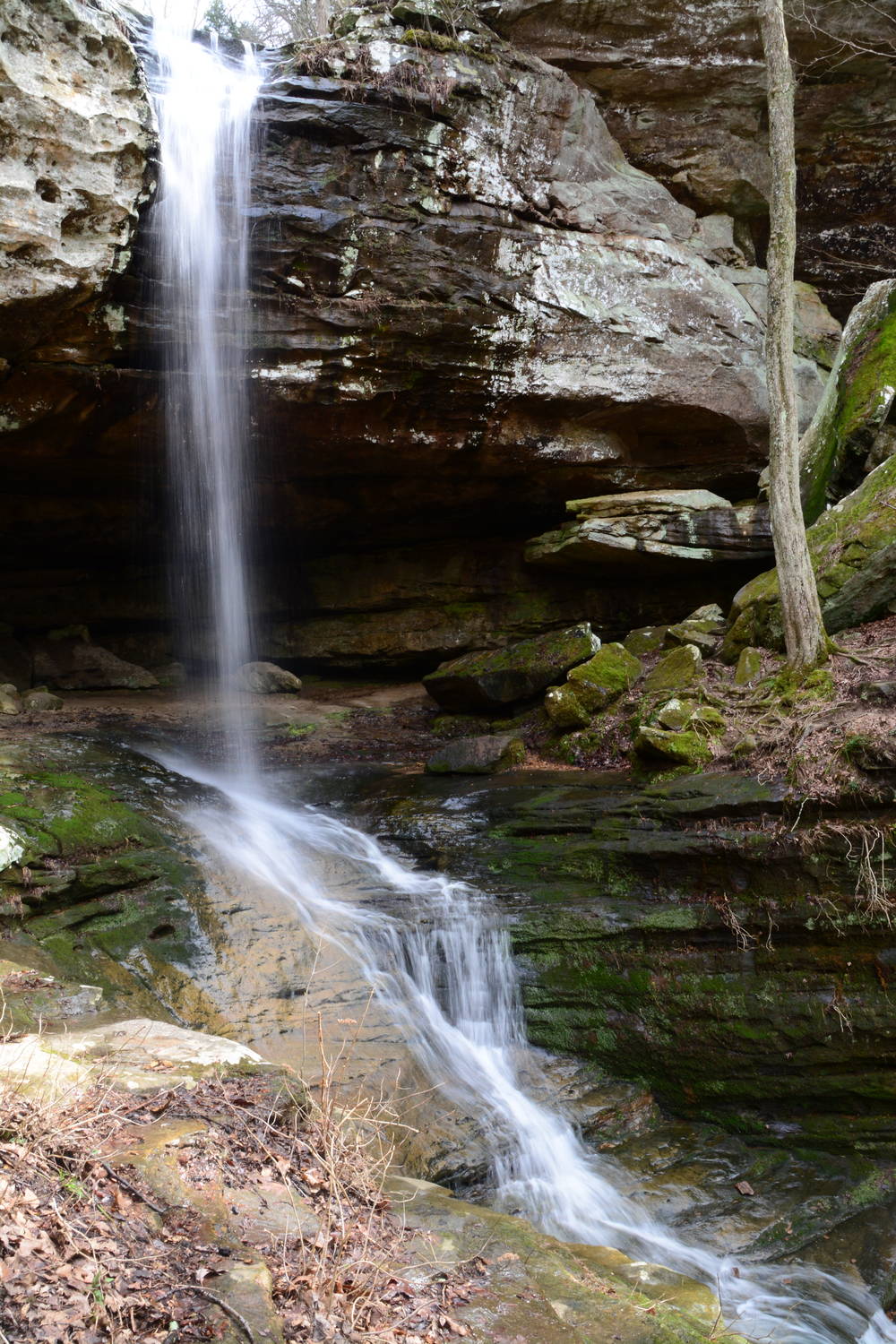 After viewing the falls, it's natural to want to climb to the top of the bluffs to see what the falls looks like from above. The view is not that great, however. During wet or icy weather, when the waterfall is most impressive, the terrain along the blufftops turns into a quagmire. Two people have already died after falling from bluffs at Ferne Clyffe this year, so I'd suggest sticking to firmer ground along the designated trails.

This recreational area includes a swimmin' hole with a deep pool immediately below rock outcrops. A popular -- but not particularly safe -- pastime is to jump off the rocks into the water. The trouble is that it's easy to misjudge the jump and end up slamming into the rocks on the way down. 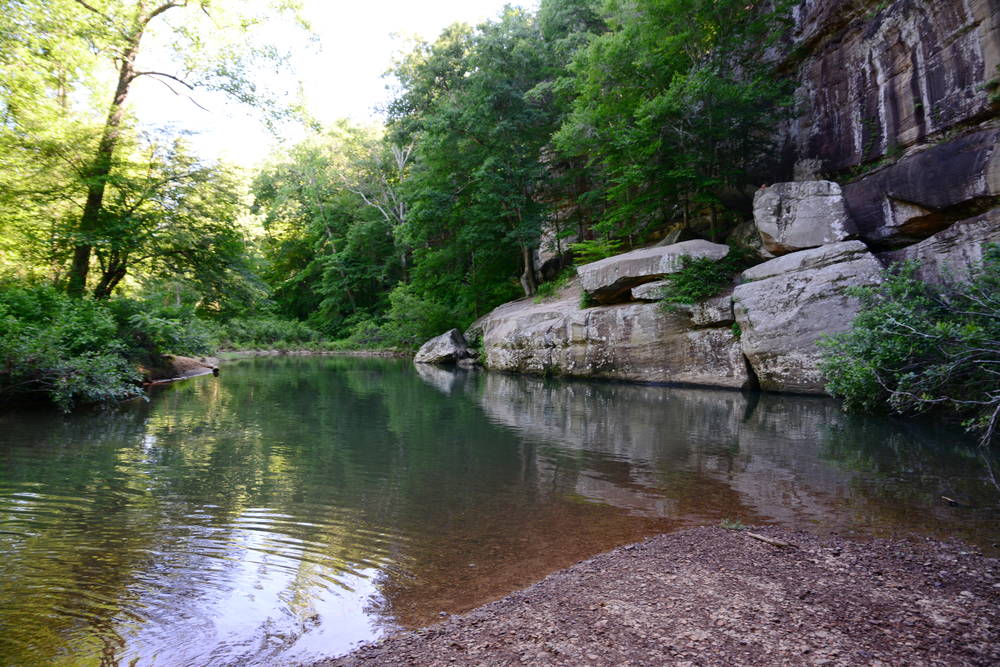 Swimming with wild abandon among the rock pinnacles at Johnsons Shut-ins State Park is a rite of passage for many Missourians. When you have to wait in a long line to get into the park during the peak season, you're going to want to enjoy it to the fullest after finally securing a parking spot.

But let's not kid ourselves. This place is dangerous for everybody who ventures away from the boardwalk.

I can't emphasize enough that wet rocks are slippery rocks, but even the dry rocks at Johnsons Shut-ins can be rather slick since they've been worn smooth by countless flash floods over geological time. 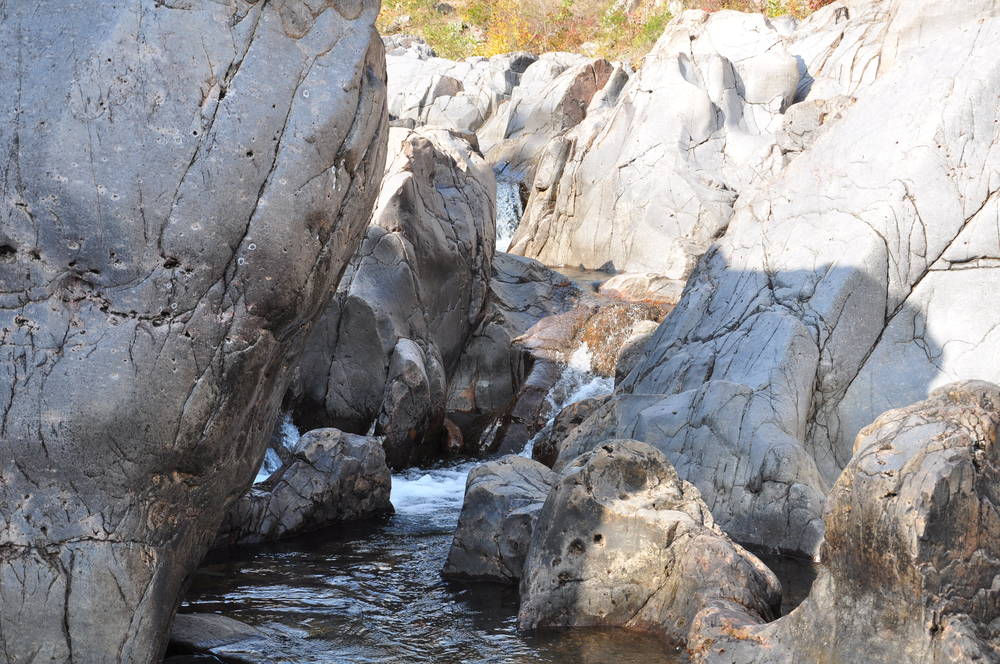 Every couple years, when the Mississippi River is exceptionally low, it's possible to walk to Tower Rock. In the past, a rope provided a way to scramble to the summit of Tower Rock. The rope has since been removed and climbing to the top is now prohibited by Conservation Department rules.

That won't stop people from trying, but keep in mind that climbing to the top is the easy part. Getting back down without falling is the hard part.

A sign in Taum Sauk Mountain State Park warns that "the trail to Mina Sauk Falls is a rugged and difficult trail." That's really quite the understatement. The trail surface is loaded with jagged rocks providing endless opportunities to trip and fall.

The trail is well worth doing in wet weather when the waterfall is flowing, but you don't want to be in a big hurry here.