Note: The history stories that appear in the newspaper on Sundays are limited to 500 words. This is an unabridged version of the Jean Dale story which adds more background and includes hyperlinks to additional sources.

From match-fixing to sign-stealing, professional baseball has had its share of scandals.

Recent events reminded me of the story of Emmett Eugene Dale, a former major-league pitcher who became embroiled in a bribery scandal, but then found redemption in Cape Girardeau playing for the Capahas in the early 1920s.

Dale, who interchangeably spelled his name Gene or Jean, earned a place on the St. Louis Cardinals roster in 1911 as a starting pitcher, but went two mediocre seasons without recording any wins.

He later landed with the Cincinnati Reds in 1915. Thanks to a wicked curveball, he put together his best season with 18 wins and 2.46 ERA.

His performance collapsed the following season and he was booted from the Reds after arguing with the manager. During the next few years, he bounced around the minor leagues with mixed success as both a pitcher and hitter.

In 1919, he played for the Salt Lake City Bees of the Pacific Coast League, and this is where he got into trouble. That year, the Vernon Tigers and Los Angeles Angels were vying for the league pennant. Vernon clinched the pennant, and a large bonus, after beating Salt Lake in several critical late-season games.

Dale started three of those games and pitched rather poorly. Babe Borton, a Vernon player, was caught the following year attempting to bribe an opposing player to lose. As the scandal exploded, he admitted that he had previously bribed Salt Lake players -- including Gene Dale. Borton reported that the scheme was bankrolled by a gambler, Nate Raymond, to fix the pennant.

A grand jury investigation revealed that Dale had indeed cashed a $500 check from Borton. Dale denied that this was a bribe, stating that the check was the repayment of a loan.

The participants in the scandal avoided criminal charges thanks to a ruling that fixing games was not technically illegal in California at the time. Nevertheless, officials with the National Association of Professional Baseball Leagues were outraged. On Jan. 12, 1921, Dale and several other players were banned for life from organized baseball.

According to an article by Bill Lamb for the Society for American Baseball Research, this expulsion provided "an instructive precedent" when Major League Baseball dealt with the far more explosive "Black Sox" scandal. MLB Commissioner Kenesaw Mountain Landis issued lifetime bans to the Chicago White Sox players who had been implicated, fairly or unfairly, for accepting payoffs to lose the World Series.

Dale's ban from organized baseball didn't apply to the semi-pro Capahas. He joined the team in May 1921. The Southeast Missourian reported that the team "had been negotiating with him for some time."

He was already familiar with Cape Girardeau from a visit several years earlier. In October 1914, he came to town with other major-leaguers as part of a barmstorming tour. Dale was the starting pitcher for the visitors, but the Capahas came from behind to win 6-4.

In his first appearance for the Capahas on May 15, 1921, he pitched well and the team beat rival Sikeston on the road 5-2. The newspaper reported much praise for the new hurler. "Dale pitches with such ease that it is disconcerting to the opposing batsmen. He uses no 'windup,' merely taking the ball from the catcher and returning it."

No mention was made of his tainted past. As the season progressed, he continued his fine pitching and his popularity surged, especially after he threw a one-hitter against Murphysboro on July 31.

On Aug. 14, he was set to pitch against a Chaffee team loaded with a ringer from the St. Louis Cardinals, pitcher Tink Riviere, but the game was rained out. The newspaper lamented the loss of this marquee matchup by publishing a silly story about the "futile ride of Pitcher Riviere."

Dale typically pitched on Sundays. The following Sunday, Aug. 21, was declared "Jean Dale Day" at the ballpark. In a pre-game ceremony in front of a crowd of 1,500, he was presented with a gift of $200 in gold, the end result of a fundraising drive by local baseball fans.

City clerk A.P. Behrens said, "Your loyalty to the management of the Cape Girardeau Baseball Association, your clean playing and gentlemanly conduct as a ball player, is highly appreciated by all, and I am sure that your fellow players have profited by your example."

What a sharp turnaround for Dale's reputation! He finished the season strong and was invited as a guest of honor to the Chamber of Commerce banquet that winter. There he announced that he intended to play with the Capahas again, and he did.

In May 1922, he arrived by train from St. Louis, with the newspaper noting that school teachers were on the lookout for students playing "hookey" in order to greet him. 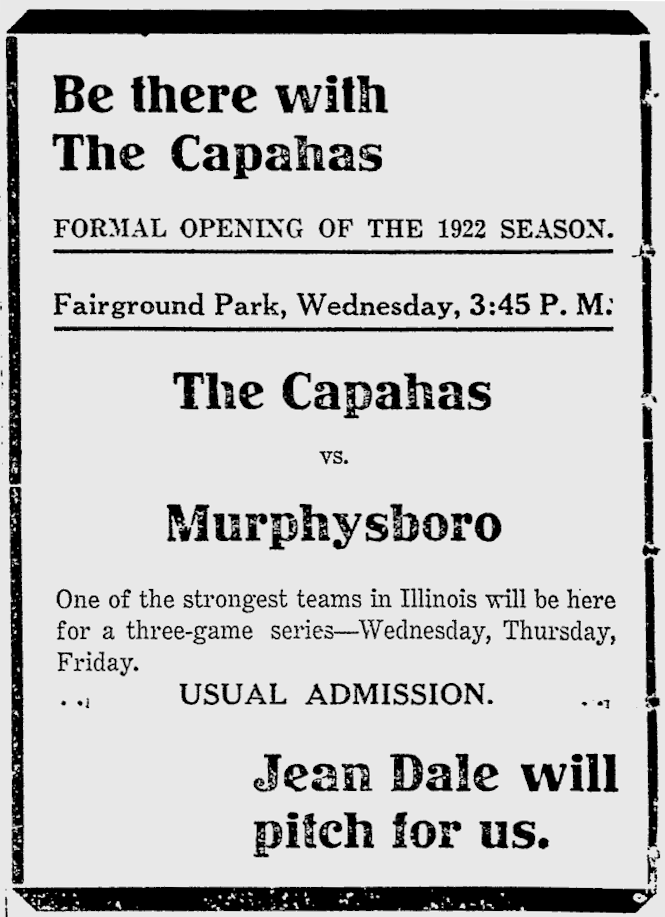 He won the home opener 1-0 against Murphysboro by demonstrating, as the newspaper described it, "artistic pitching." It appeared that he was set for another sterling season.

By June, however, the Capahas were facing severe financial difficulties. As the highest paid player on the team, he was "the first to be given the gate." Despite his popularity, the newspaper only published a minor blurb about his premature departure.

It's unclear if he played any more baseball. He moved back to his hometown of St. Louis and married. His obituary in 1958 stated that he had been "employed as a plater for the Steel Products Corp." in St. Louis.