Massive sinkhole opens in Reynolds County along the Trail of Tears 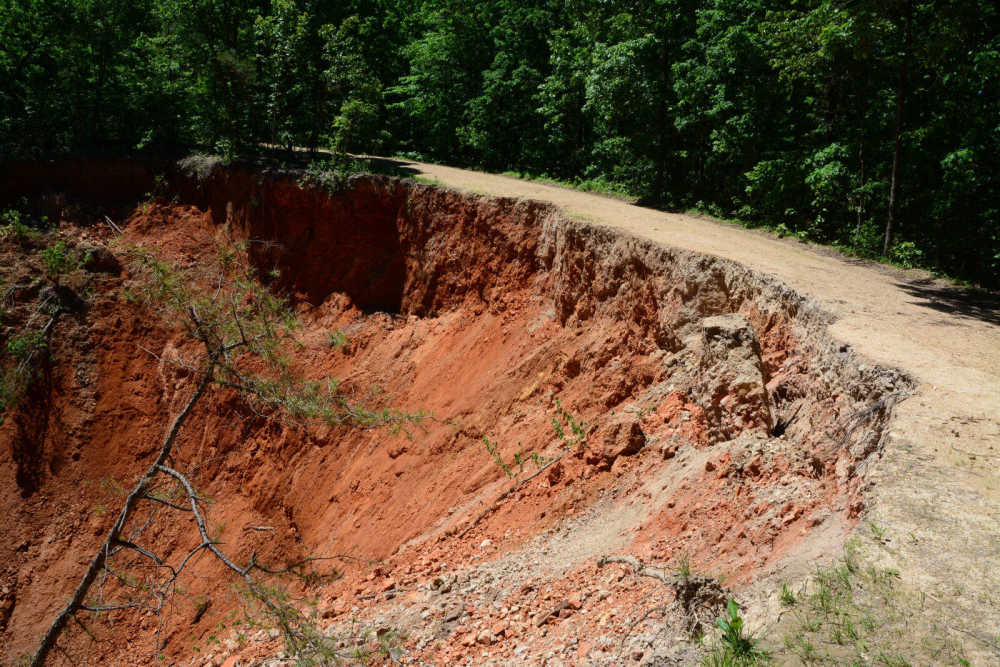 Warning: The location featured here is more hazardous than the usual "Pavement Ends" destination. We're not responsible if you venture too close to the edge and get walloped by gravity. The precipice of a growing sinkhole is not your friend.

Just when you thought 2020 couldn't bring any more mayhem, a massive sinkhole has opened in Reynolds County, taking down a bunch of trees and threatening to swallow a segment of the Trail of Tears. 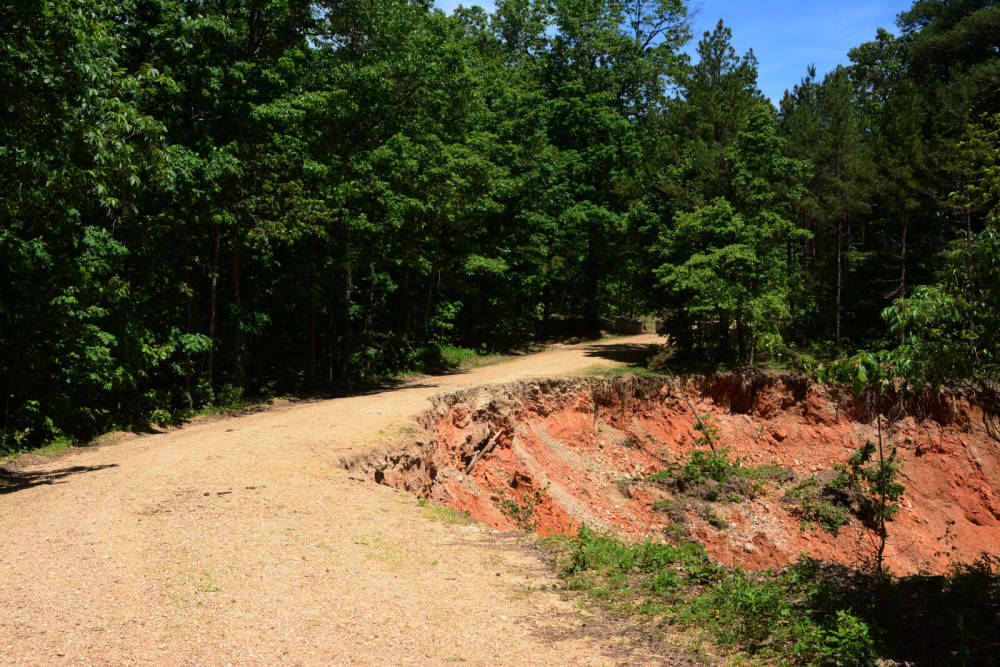 Located south of Viburnum, this sinkhole recently developed, forcing the closure of Reynolds County Road 907 within the Mark Twain National Forest. The hole isn't quite large enough to span the length of a football field, but it's getting there. I measured a diameter of 180 feet while walking around the rim with a GPS receiver -- and keeping a safe social distance from the abyss (and subtracting that distance from the total). 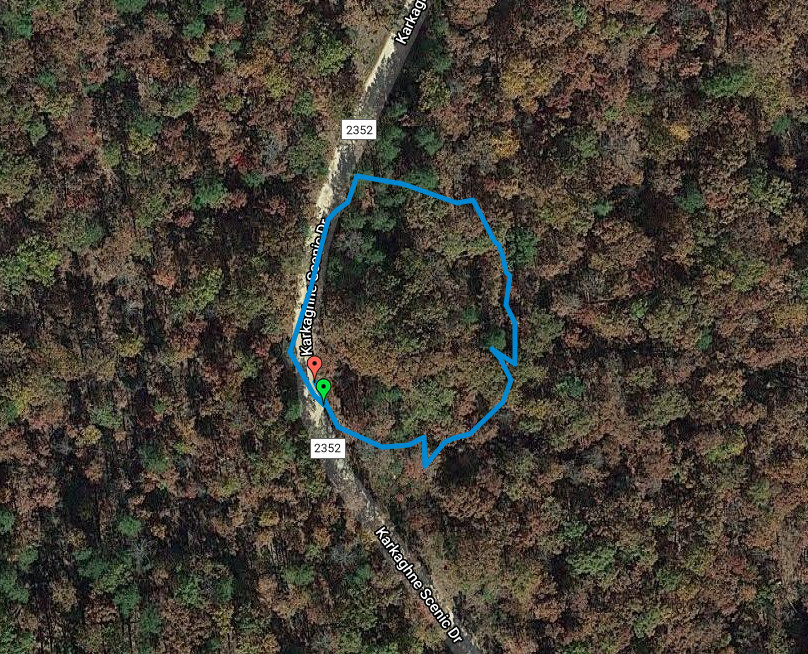 The sinkhole is growing every day. Small chunks of soil and rock frequently come loose and tumble down the slopes while making ominous noises. 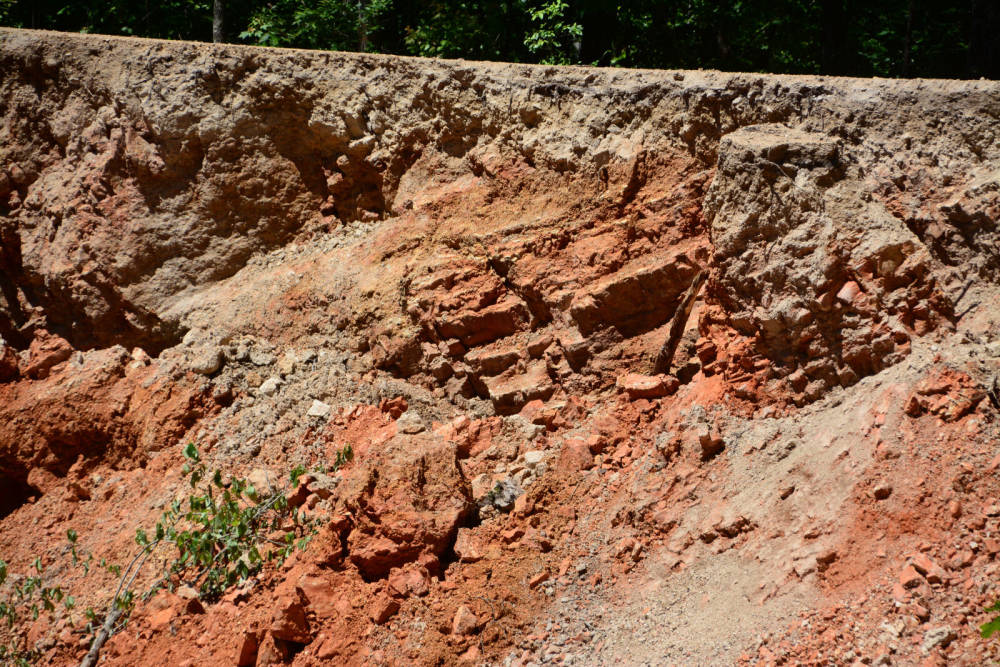 One remaining hoodoo next to the road is on the verge of crumbling. 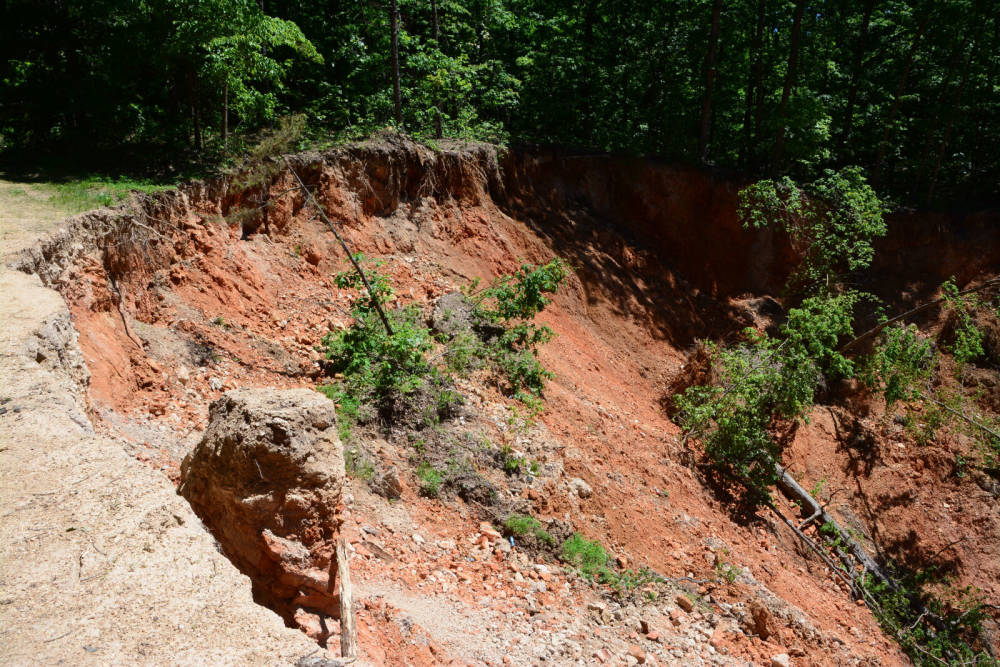 On the far side of the sinkhole, a large crack has formed several feet away from the edge. It won't take much for this entire area to give way. 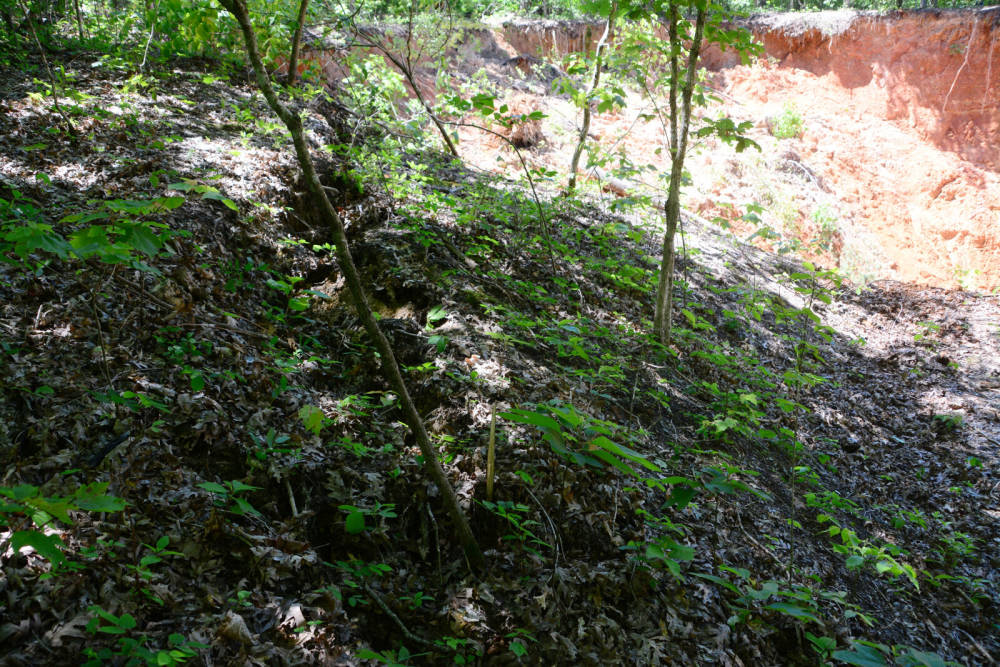 It's hard to imagine the commotion that must have occured when the sinkhole first opened. If a sinkhole sinks when nobody is around, does it still make a sound? 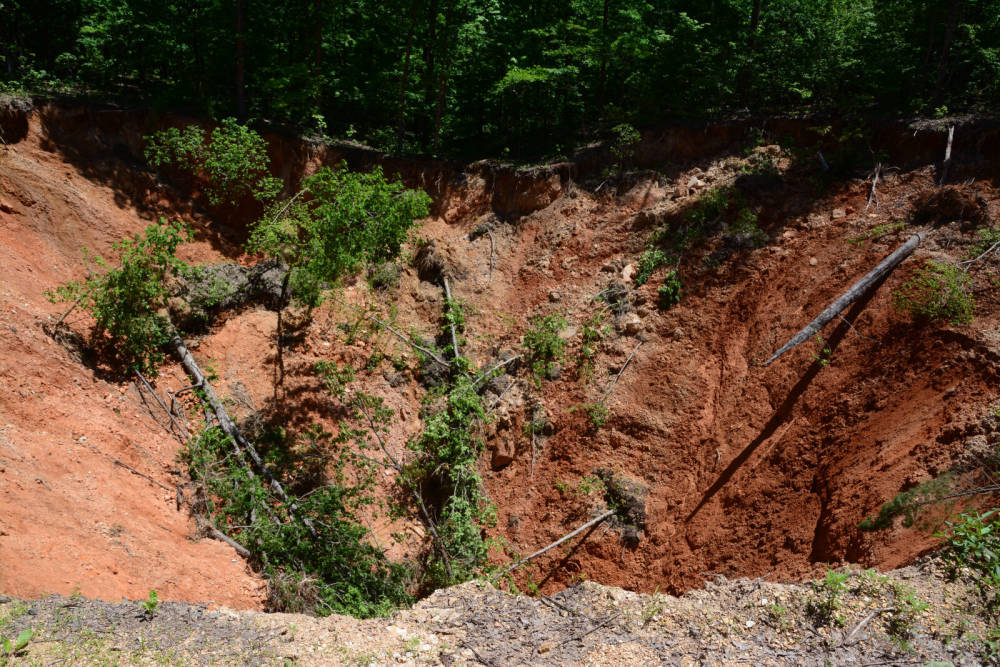 The sinkhole sits between two lead mines: the Buick Mine (to the northeast) and the Brushy Creek Mine (to the southwest), both operated by The Doe Run Company. A ventilation shaft is located one-third of a mile to the south of the sinkhole. As near as I can tell, the technical term for the vent shaft is CDH, or Core Drill Hole. 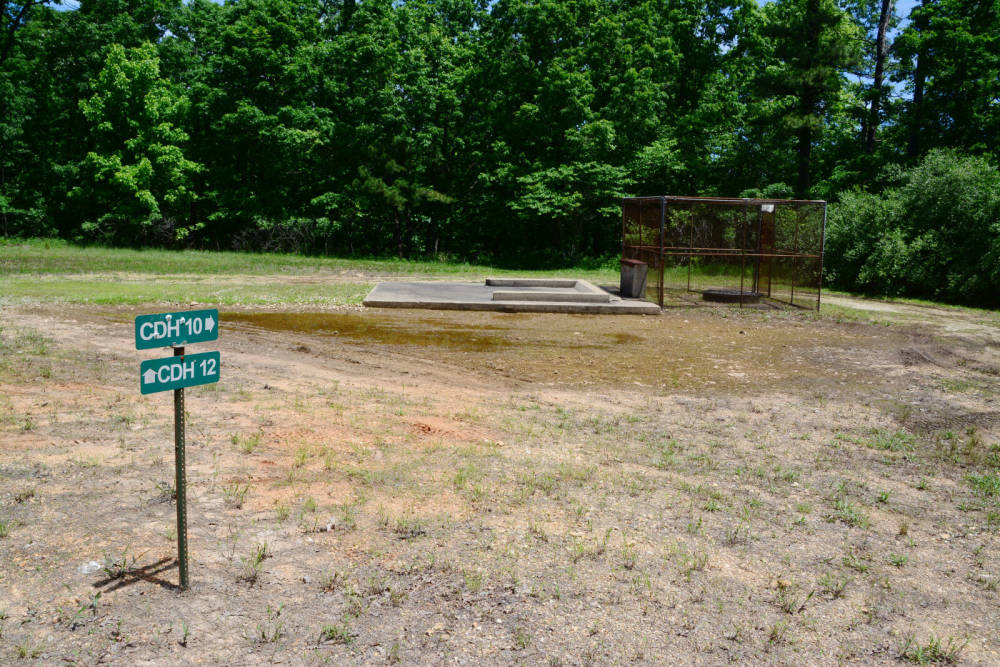 This raises a pressing question: who is responsible for dealing with the sinkhole? Was it the result of a collapse of part of the mining complex? Or was it caused by the subsidence of a natural cave?

Either way, this situation shouldn't remain unresolved indefinitely. The gaping wound in the earth has forced the closure of a historically significant road. 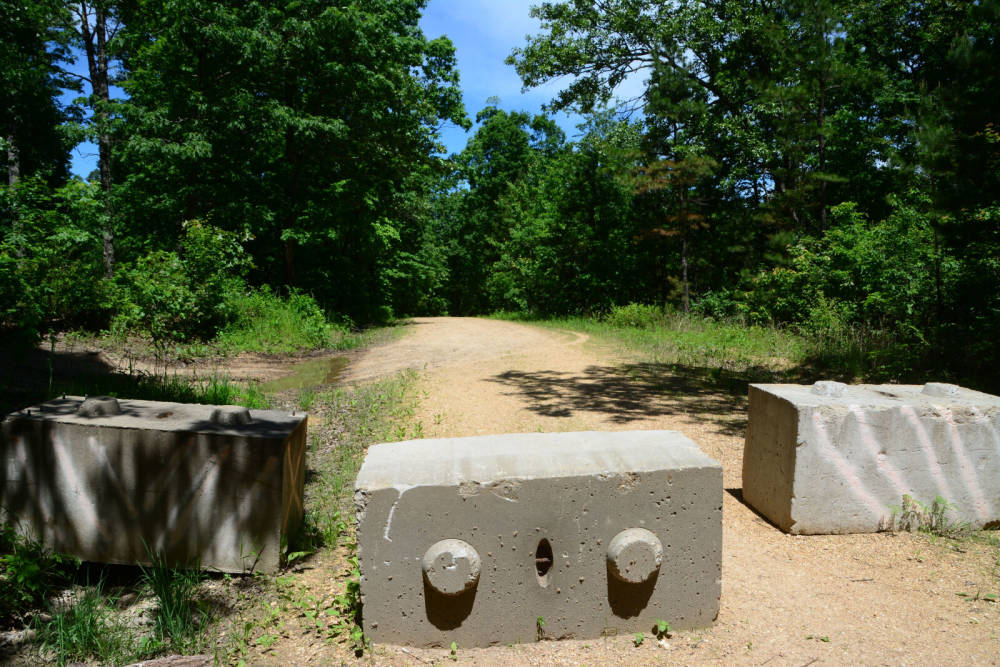 The road traces the original path of the Hildebrand Route of the Trail of Tears. During the winter of 1838-39, Peter Hildebrand directed a large detachment of Cherokee through the Ozarks by sticking to the ridgelines where possible.

In 2013, signs were installed along 31.7 miles of the road. It was announced that this was the "longest marked original route trail segment on the Trail of Tears to date." 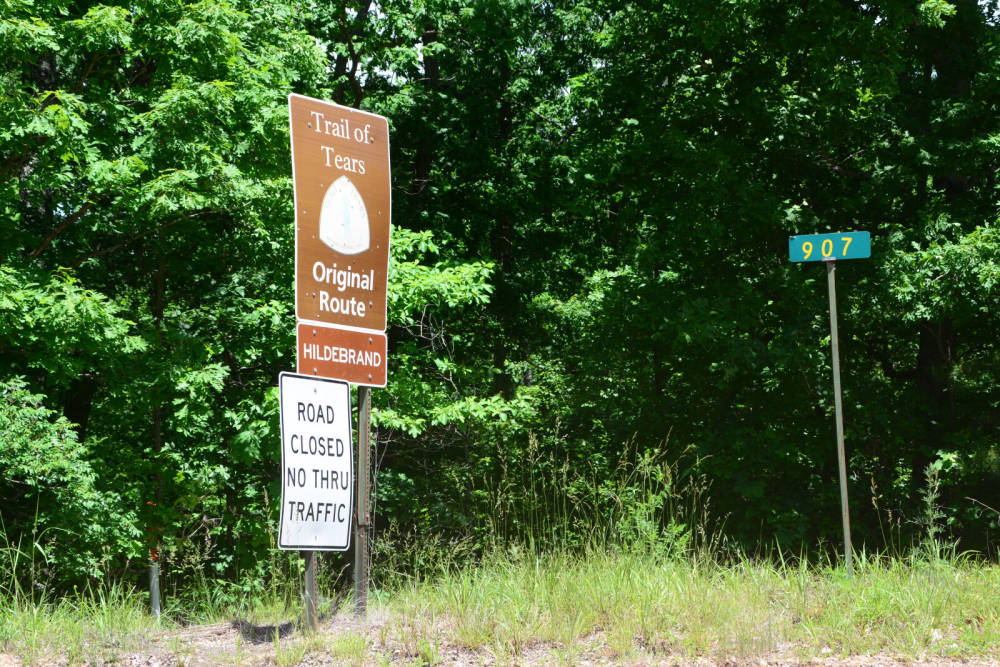 We'll have to see what happens next. I suspect the hole will grow larger during the summer and eventually swallow the entire road.

Map of GPS track for the sinkhole

From Cape Girardeau or Jackson, take Highway 72 west through Fredericktown to Arcadia. After crossing the viaduct at Arcadia, make two right turns to stay on Highway 72. Continue south to the junction with Highway 49 and veer right (west) toward Lesterville. A few miles after passing through Lesterville, turn right on Highway 49 (this junction is easy to miss).

After 5 miles, Highway 49 turns into Route J. Continue straight on Route J until it ends at Route KK. Turn left on Route KK and drive 1.2 miles. Then turn right on County Road 907 (shown as Karkaghne Scenic Drive or Forest Road 2352 on some maps). Look for the "Trail of Tears" and "Road Closed" signs.

Drive approximately 2 miles on this gravel road until you reach the barricade. Then walk -- carefully -- to the sinkhole a short distance ahead.