In my last blog I described the surprise naming of Jay Nixon State Park, the resulting controversy, and attempts by lawmakers to fight back.

Since then, the story has taken another twist. Within the last few days, the Department of Natural Resources website has been updated with this terse notice about Jay Nixon State Park: "Park Closed. No Access."

The news release that announced the park has been deleted from the website as well.

So now what? Clearly something is brewing at DNR headquarters, but at this point it's hard to say what will happen next. Could this be a sign that DNR might abandon the whole idea and sell or auction off the property? Or is the agency waiting to build some trails and facilities before declaring the park "open" again?

While we wait for further developments, I can at least share the results of my recent visit to the park.

I had carefully studied various maps and consulted with friends, trying to figure out the best way to get there. It would be necessary to approach from the south over mountainous terrain, setting out from either Taum Sauk Mountain State Park or Johnson's Shut-ins State Park. Reaching the park, and making it back to the trailhead before dark, would require starting early, maintaining a brisk pace, and hoping that we didn't get lost. And even with all that, there would be precious little time to actually explore the place.

The maps did suggest a shortcut, but it would involve extensive bushwhacking. The idea was to hike from the Taum Sauk trailhead to Wildcat Mountain (fairly easy), descend the west flank of the mountain (not easy), and then bushwhack northwest toward the border of the new park (also not easy). Adding to the difficulty were two parcels of private property, one at the top of Wildcat Mountain and another blocking the most direct route to the park from the southeast. 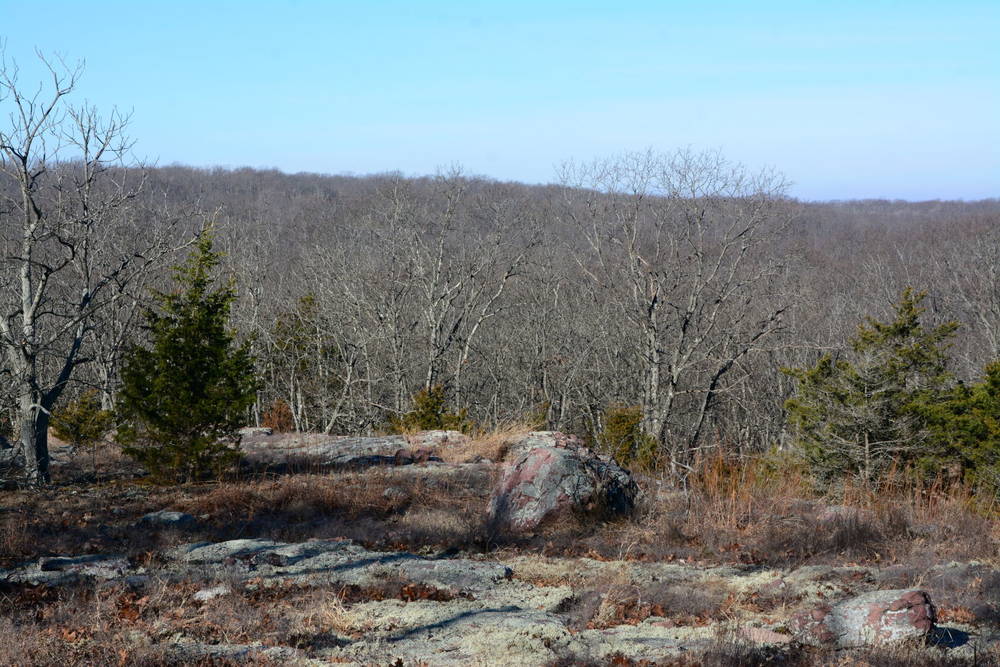 Joined by a couple friends, we tackled the bushwhack route. Things went according to plan at first: Wildcat Mountain was easy to reach, and dropping off the mountain was tricky, but not any worse than expected. 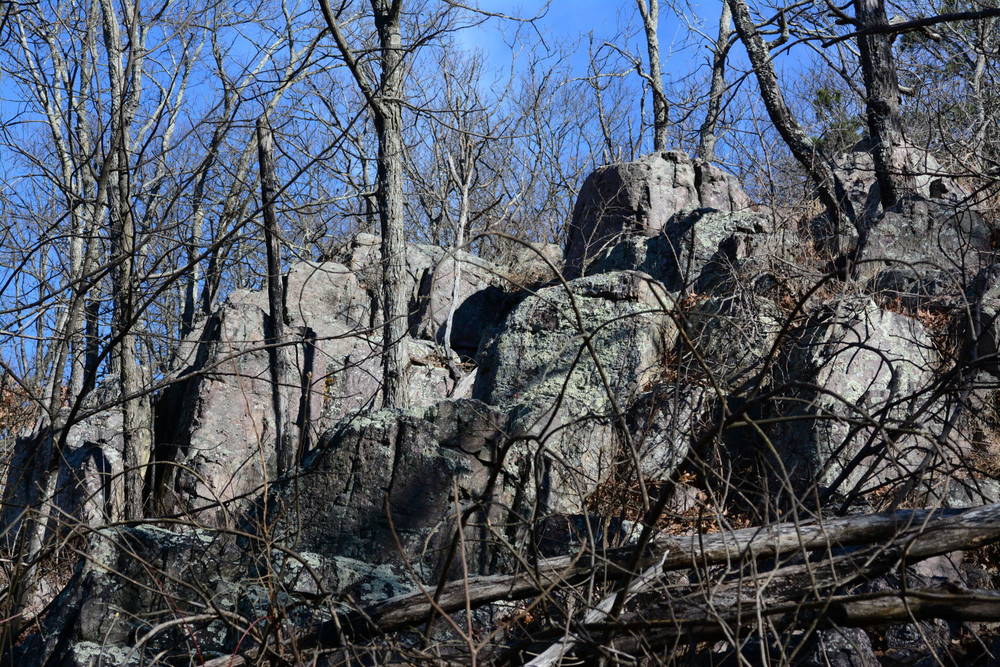 Leaving the mountain, we stumbled across an ATV road, which appeared to head toward the park. Of course this was too good to be true. After following the road a short distance, we reached private property. This required a change in plan, and soon we were scrambling down a deceptively steep and rocky mountainside.

At the bottom, we came to a clearing for a high-voltage power line. According to the topo maps, from here it should be an easy, flat walk northwest to reach the new park. Our goal was the large man-made lake at the center of the park.

Alas, the rest of the hike was not as easy as predicted, requiring a battle with deep undergrowth for a maddening distance. And then finally we popped out at the lake. 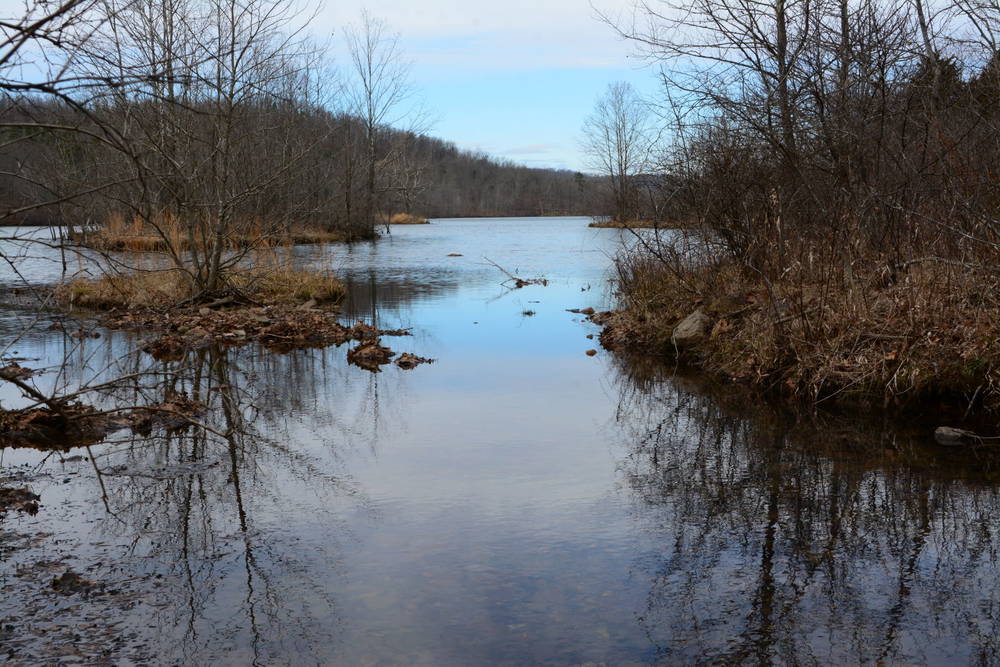 ...and it was a disappointment. From here it would be difficult to walk around the lake thanks to the thick vegetation and steep slopes. Trees blocked the best views of the water. While having lunch, we did spot a pair of bald eagles circling overhead. 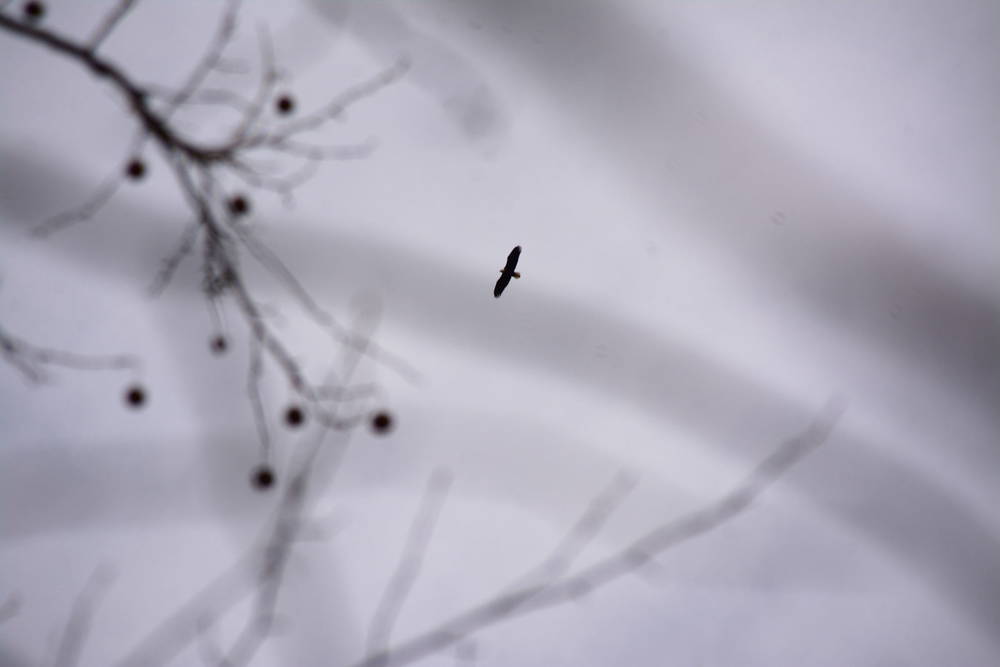 Recognizing the difficulty of continuing forward, and nervously watching the time, we decided that we needed to leave and start back home. This time we took advantage of the powerline cut to avoid some of the worst terrain, but we still had to bushwhack to the southeast if we wanted to return to Wildcat Mountain. 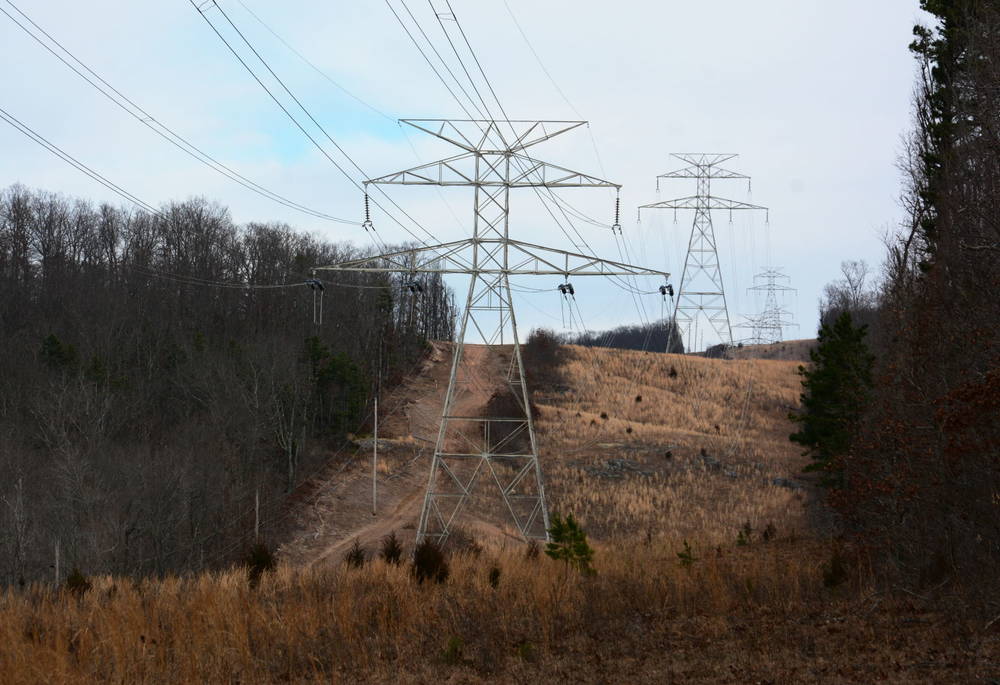 We never actually made it back the way we came, instead wandering through a ravine that eventually led to the Ozark Trail. Following the OT would require several more miles of hiking than the Wildcat Mountain shortcut. But if we weren't able to make it back to the trailhead by dark, it would be far better to find ourselves on a marked trail rather than scrambling through who-knows-what.

The Ozark Trail is no picnic, however, as it frequently zigzags and disappears through boulder fields. And then, at sunset, after several miles of hiking along the trail, we reached Mina Sauk Falls. This is Missouri's tallest waterfall, and it was flowing with a nice volume of water (compared to the usual trickle). But I, for one, was too exhausted to enjoy the waterfall despite the golden light. 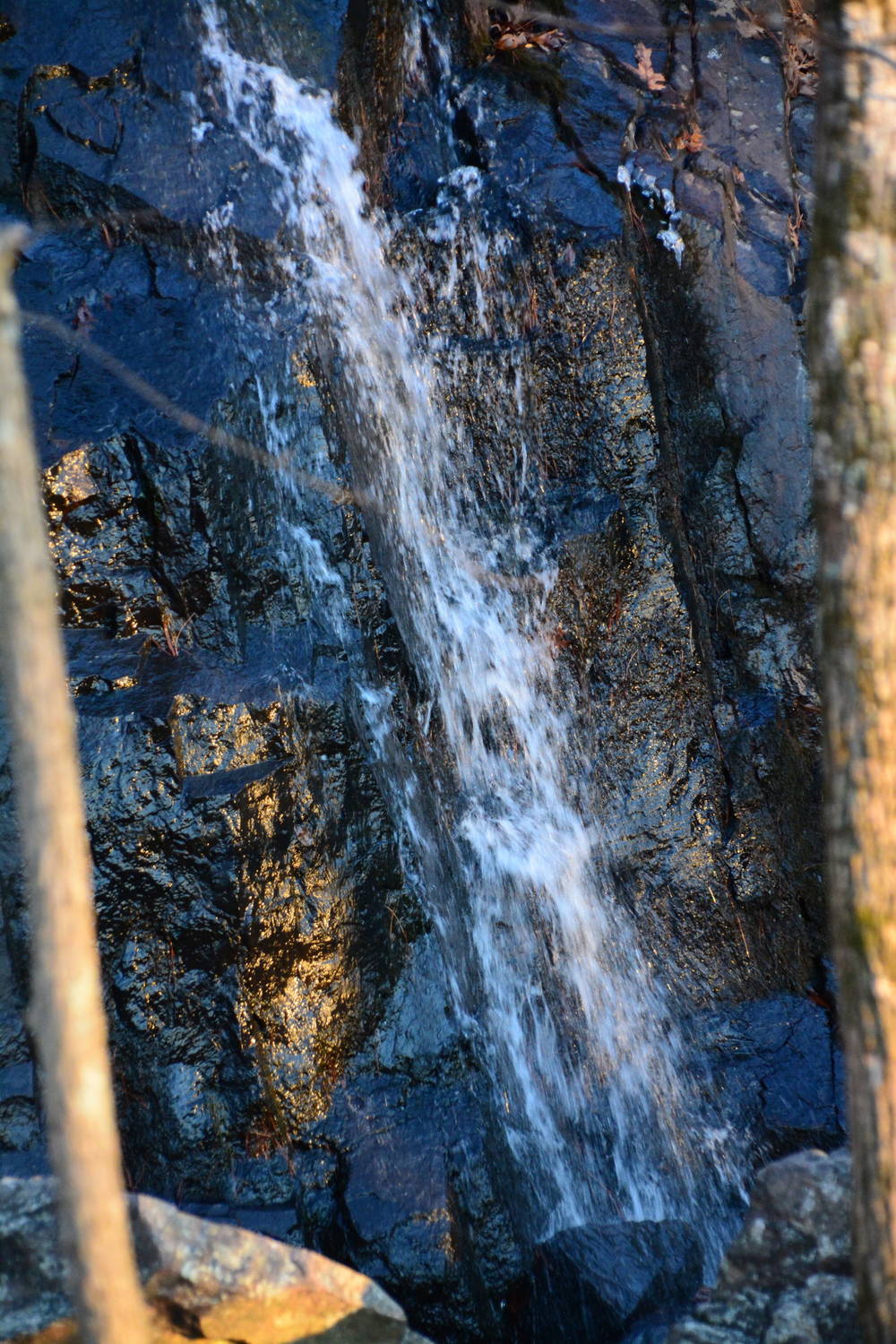 We finally made it back to the trailhead in pitch black conditions, thankful for our flashlights. Total distance according to my GPS: 12.4 miles.

Now armed with a better handle on the lay of the land, it should be easier to reach the lake and return to Taum Sauk in less than 8 miles roundtrip. But that still requires considerable bushwhacking, making this a winter-only route. And this is the best case scenario, which is not exactly comforting for would-be visitors.

To avoid the bushwhacking, the next best route is probably to start at the Route N Trailhead at Johnson's Shut-ins State Park, hike past the scour canyon, and then follow the Ozark Trail eastward to the top of Proffitt Mountain. From here, topo maps suggest that an old jeep trail would lead downhill to the lake, although I have no idea how feasible that might be. I estimate the roundtrip distance to be at least 14 miles, making for one very long day.

In the end, I could only reach one conclusion: Jay Nixon State Park doesn't offer enough of a payoff for the level of difficulty in reaching it.

Of course this is all a moot point now that the park is officially closed. Let us just hope that the legislature doesn't do anything stupid -- and spiteful -- like forcing DNR to sell the property at a loss. On the other hand, let's hope that DNR doesn't try to spend a bunch of additional money on this boondoggle.

Perhaps the best choice is to simply make the property a part of Taum Sauk Mountain State Park, as originally planned. This way, serious hikers and backpackers could still explore the area, while most visitors would stick with the more accessible portions of Taum Sauk. This would also sidestep the name controversy while recognizing that the newly acquired property is not compelling enough to justify the creation of a separate state park.