"Nothing was more up-to-date when it was built, or is more obsolete today, than the railroad station."

In the heyday of railroading, many local towns revolved around their train stations and depots. These facilities served as portals to the rest of the modern world and, as a result, functioned as important community gathering places.

With many rail lines long gone, and passenger service nearly non-existent, most depots have disappeared. However, those depots that still remain -- despite being obsolete -- are now often treated as landmarks worthy of preservation. The trains may not stop anymore, but these historic buildings are still important community gathering places, reborn as village halls, libraries, or museums.

In traveling through Southern Illinois, I've noticed that it has become downright fashionable for towns to dedicate a small park around their depots, complete with sections of track and a caboose.

Here is a guide to some of the railroad depots in extreme Southern Illinois. 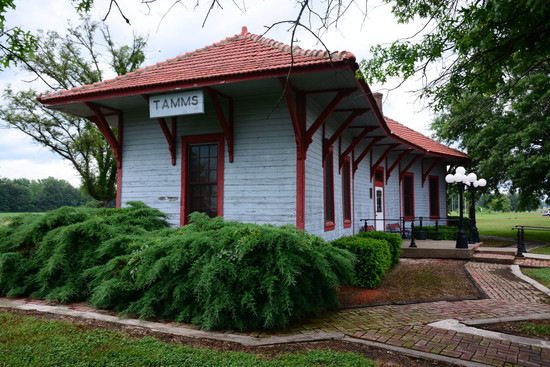 With its overhanging roof, the depot at Tamms is a classic example of railroad style. Yet it also has a rather unusual feature: the building is curved. Sitting next to a junction of two rail lines meeting at an oblique angle, the depot was curved so that one dispatch office could overlook both sets of tracks. Built in 1899, this "two-birds-with-one-stone" depot serviced the Gulf, Mobile, & Ohio Railroad as well as the Chicago & Eastern Illinois Railroad. 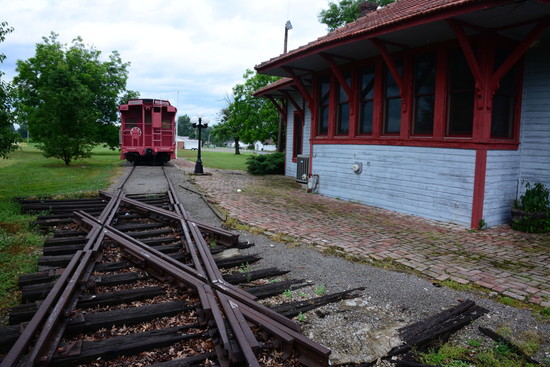 After the depot was threatened with demolition, the village of Tamms bought the structure and restored it as a village hall in 1986. Along with an Illinois Central caboose, the depot park preserves the "diamond" track intersection of the two rail lines. 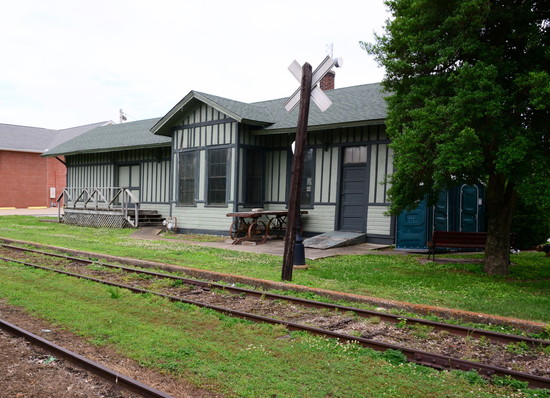 Built in 1872, the depot at Olmsted also has a classic style. It sits next to a pair of preserved track segments housing a nicely painted caboose. Eagle-eyed rail fans will point out that the paint scheme isn't historically accurate: the caboose was from the Illinois Central, not the New York Central. It still looks good, just the same. 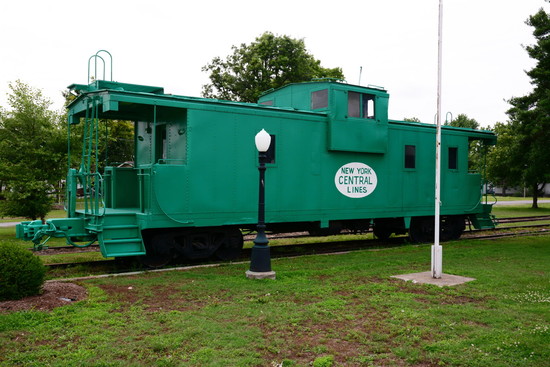 Jonesboro's depot, located a few blocks south of the town square, now serves as a public library. When the rail line was first constructed between Cairo and St. Louis, it was one of the longest narrow-gauge railroads in the world. Of course, the depot wouldn't be complete without an obligatory Illinois Central caboose. The library grounds also include two hefty cast-iron artifacts: a "JONESBORO CORPORATION LINE" marker and a "STATION 1 MILE" sign. (Similar signs are also on display at Alto Pass along the same former rail line.) 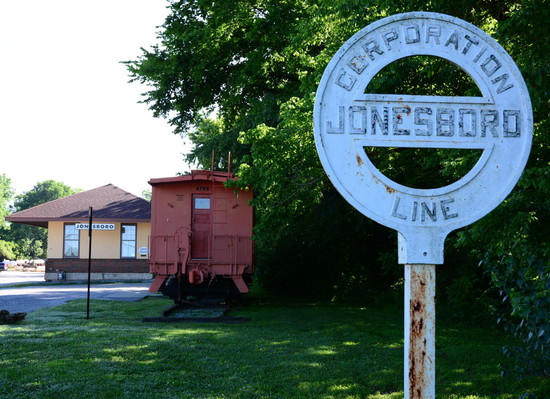 Although trains haven't passed through Vienna for many years, the town is fortunate that the old rail corridor was converted into the popular Tunnel Hill State Trail. The town needed a depot, however, to "keep up with the Jonesboros" (so to speak). They found such a building at the old townsite of Forman, several miles to the south. Forman Depot was relocated to Vienna's city park. 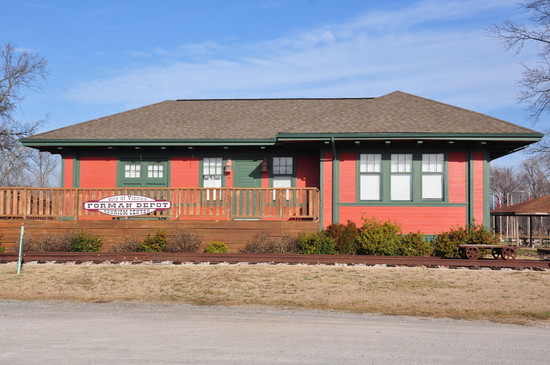 This depot doesn't have a caboose, but it does include a re-creation of the old Forman track junction. 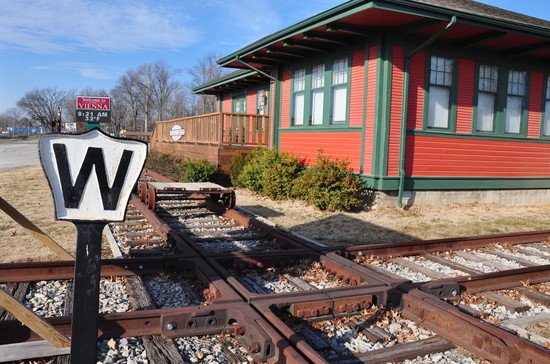 Unlike the depots featured above, the Ullin Depot still fronts an active rail line, although the trains don't stop here anymore. Constructed in 1897, the building faced an uncertain future after it was moved to another location and used for storage. It has since been moved back to its rightful place next to the tracks, and restored as a village hall and library in 2012. 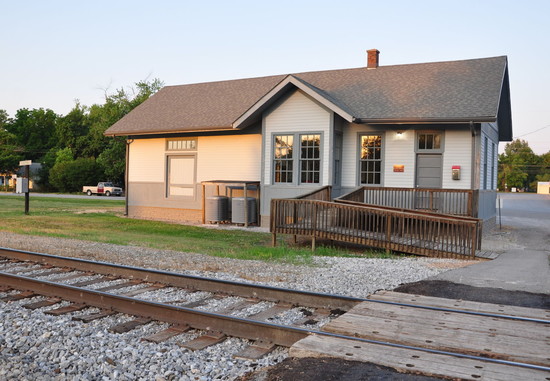 Yet another Illinois Central caboose has been obtained and currently awaits restoration next to the depot. 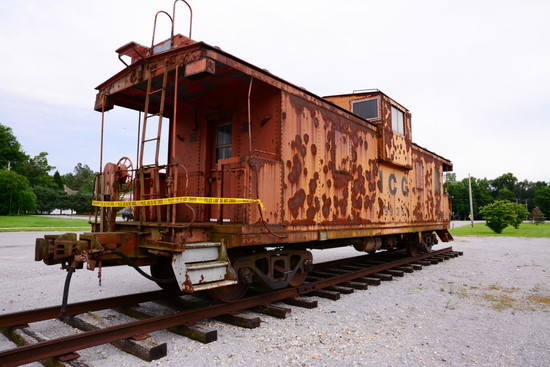 Karnak's old depot has not been as fortunate as the rest. It sits derelict and shrounded by overgrowth on the edge of town next to the Tunnel Hill Trail. 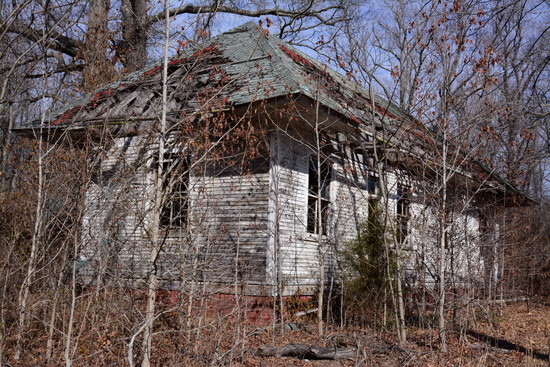 Last summer, a notice attached to the building declared it a "nuisance." It's difficult to say whether there is any realistic prospects for salvaging the structure. When I last checked in June of this year, the depot was still standing -- barely.