Hike to a man-made canyon

In my last blog, I wrote about the ghost town of Kaolin near Alto Pass, Illinois, where clay was quarried to produce china and porcelain. The village was fortunate to have access to the Cairo & St. Louis Railroad, one of the longest narrow gauge railroads in the world when it was completed in 1875.

According to the book American narrow gauge railroads by George Woodman Hilton (1990), construction of the railroad was extremely expensive, requiring two steep grades to the top of Alto Pass. The railroad engineers also faced another daunting task: getting through Iron Mountain. They punched through the difficult terrain by building a tunnel just south of Kaolin.

The tunnel was probably short-lived. The Mobile & Ohio Railroad took control of the line in 1886 and converted it to standard gauge. It's likely that they "daylighted" the tunnel (cut through it) during the upgrade.

By 1981, the railroad was dismantled, leaving behind the cut. Thanks to steady erosion over the years, the area now resembles a canyon, but the old railbed still remains. 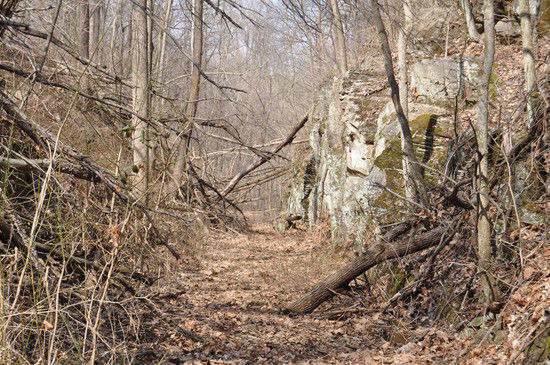 The east side of the cut features large exposed rocks. 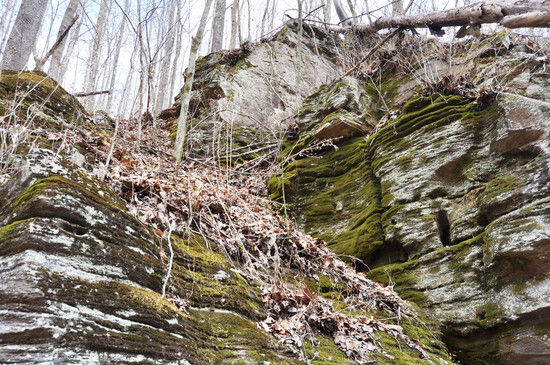 While nature is trying to reclaim the area, some artifacts from the railroad remain, including stone retaining walls: 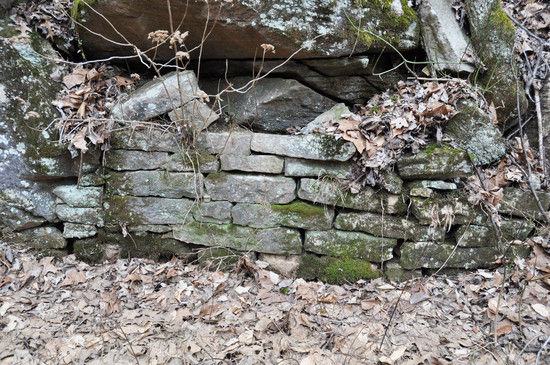 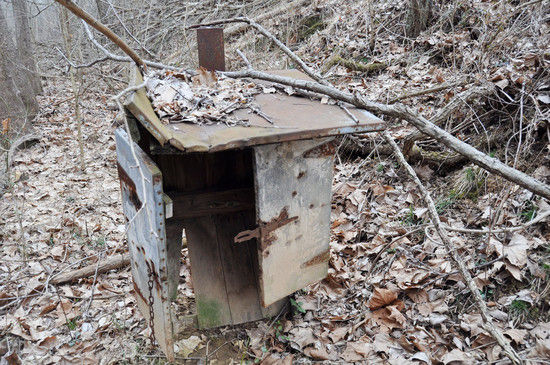 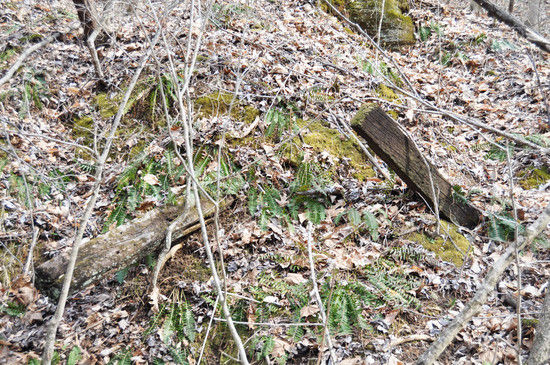 ...the wooden foundation for an unknown structure: 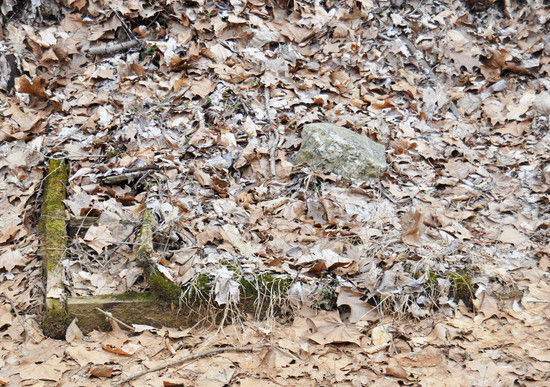 ...and an inscription from somebody named A. Hamilton: 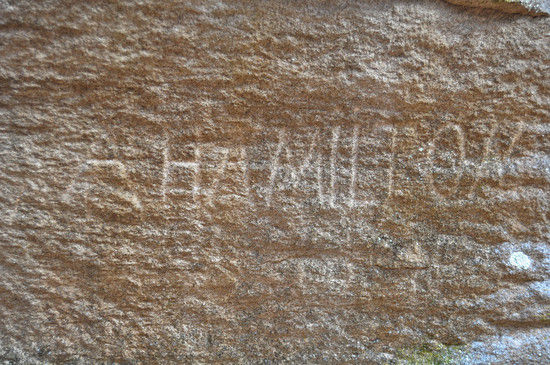 Many trees have toppled over, although it's hard to tell exactly which storm caused the damage. Take you pick: the '08 ice storm, the '09 ice storm, or the May 2009 "inland hurricane." 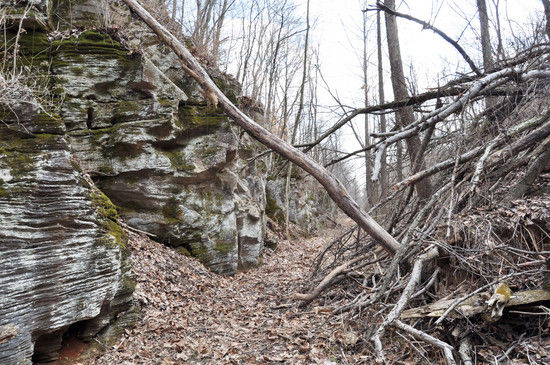 According to the Iron Mountain trail map, the tunnel cut is located on National Forest land, but is bounded by private property to the north and south. The old railbed is intact, but quickly enters a muddy quagmire on the south: 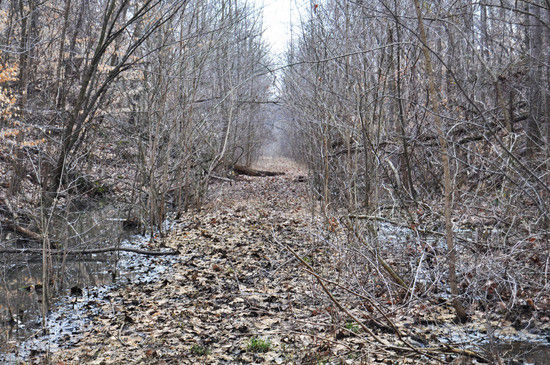 The railbed to the north remains in better shape: 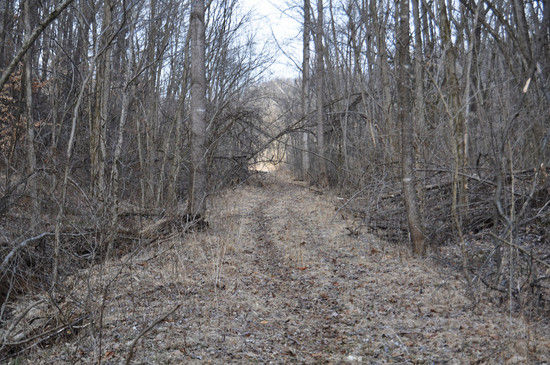 According to topographic maps, the tunnel cut is at least 80 feet deep. The view is actually more impressive from above, peering over the edge. 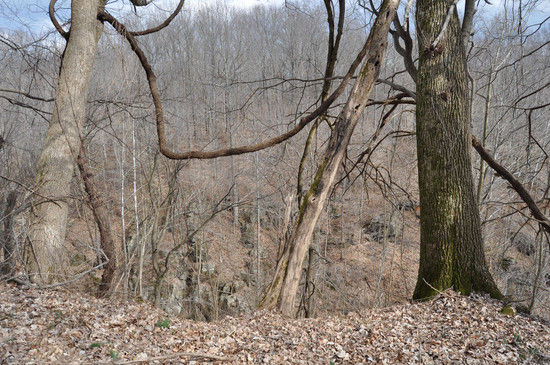 I don't recommend this hike for people who are -- how do I put this delicately? -- navigationally challenged. Then again, getting lost in the woods can be fun, as long as you don't stay lost for long.

The main Iron Mountain trail doesn't come close to the tunnel cut. However, a pair of "unofficial" horse trails connect with the main trail. These are marked somewhat irregularly with pink and orange flags tied to trees.

Here is the all-important map showing the trails: 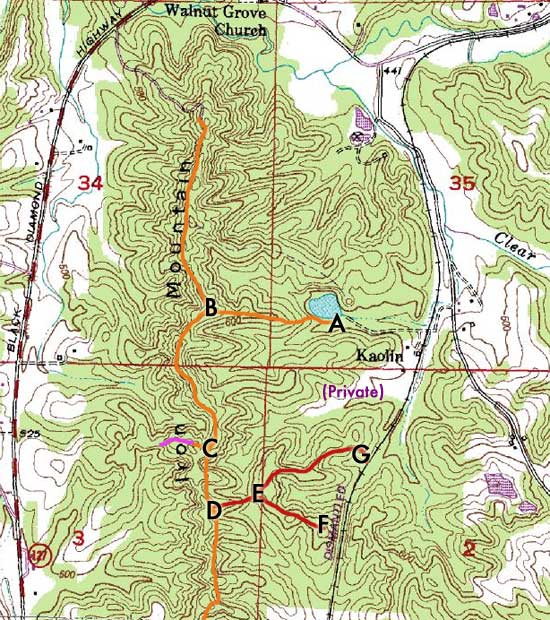 "A" is the parking area next to the Kaolin Pit.
"B" is the T-junction at the top of Iron Mountain.
"C" is a trail junction with a road leading to the private Iron Mountain Ranch
"D" is the unmarked place where the "unofficial" horse trail bears left from the main trail.
"E" is where the horse trail forks.
"F" is a point overlooking the tunnel cut where the trail ends.
"G" is where the other trail meets the old railbed, providing access to the interior of the tunnel cut.

Here are the directions:

From the Kaolin Pit picnic area, take the trail west to the top of Iron Mountain. Go left at the trail's T-junction and follow the trail south. Look for the turnoff on the right for a side road leading to the private ranch. Continue south of the main trail for a short distance.

Here's the hard part. The horse trail bears left, but is not marked. Keep your eyes peeled for a series of disturbances (small holes and mounds) in the ground on the left side of the trail near the GPS coordinates 37.50470, -89.31064. Walk into the woods a short distance downhill and you should see the beginning of the horse trail, which is easy to follow once you find it. The trail runs parallel to a gully (probably an old road). Watch closely for the flags tied to the trees.

The horse trail forks. The right fork continues to loosely follow the old road and soon reaches a faint clearing. Keep going straight until you reach the top of the bluff overlooking the tunnel cut. To get down to the cut, you can either hike through the woods to the left (north) and down the steep hill, or backtrack to the other fork in the trail.

The left fork meanders through the woods before dropping down through small hollow and over to the railbed. Turn right and follow the old rail path south to the tunnel cut at GPS coordinates 37.50432, -89.30364.

Be sure to print a copy of the Iron Mountain/Kaolin Trail map, as it shows the boundaries for private property that you want to avoid. You'll need it.