In earlier blogs, I've discussed climbing the summits of prominent local peaks, including Buford Mountain in Missouri and Bald Knob in Illinois. Both feature over 600 feet of elevation gain.

Those are serious climbs for this part of the country, but pale in comparison to Black Mountain, the highest point in Madison County, Missouri. To reach the summit from the valley floor and nearest highway, it's necessary to climb 950 feet in less than a mile. 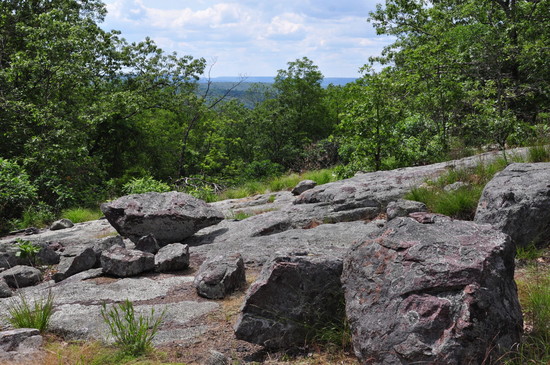 After studying the topographic maps for several major Missouri peaks, I suspect Black Mountain holds the record for steepest elevation gain within a mile. 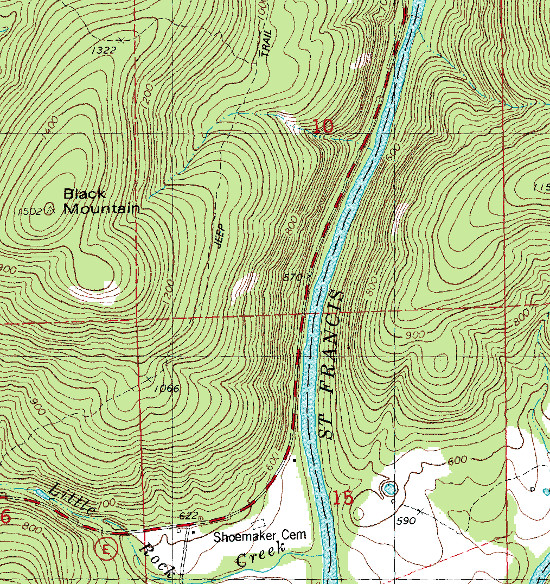 Mudlick Mountain and Clark Mountain, both in Wayne County, appear to be closely tied for second on the list with a gain of approx. 870 feet. Both of these peaks can be seen from near the summit of Black Mountain. 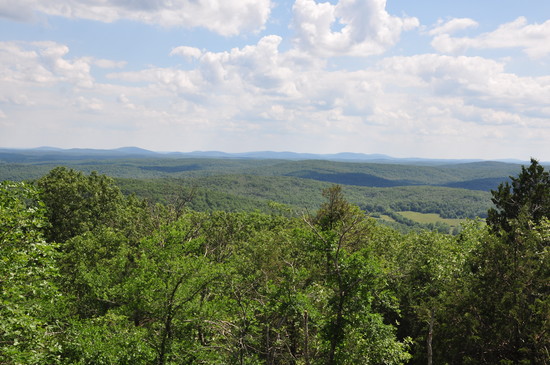 Mudlick Mountain, a part of Sam A. Baker State Park, is the easiest to spot in the distance. 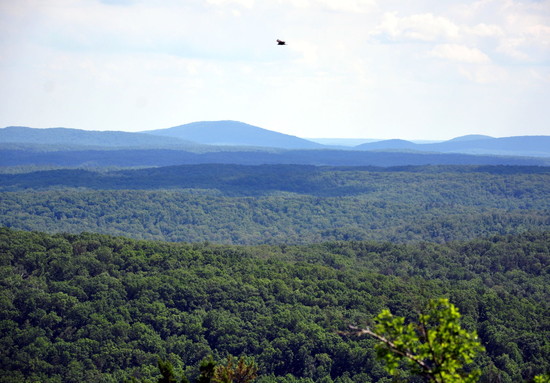 As I've written previously, climbing Mudlick Mountain is basically a waste of time: the summit is choked with trees that block any kind of view. Black Mountain's highest point suffers the same problem -- with a bonus of poison ivy. 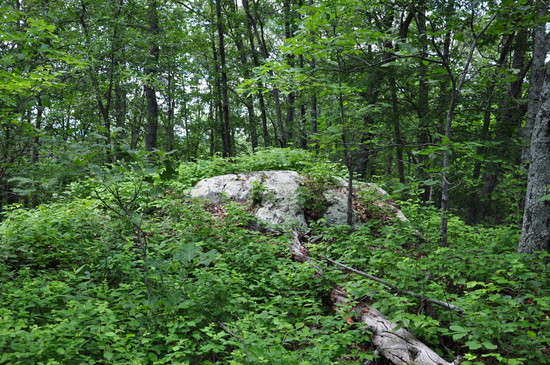 However, Black Mountain does have glades that provide open spaces to see above the trees. At first, I found these glades to be frustrating, offering just enough clearing to provide tantalizing glimpses, but not much else. 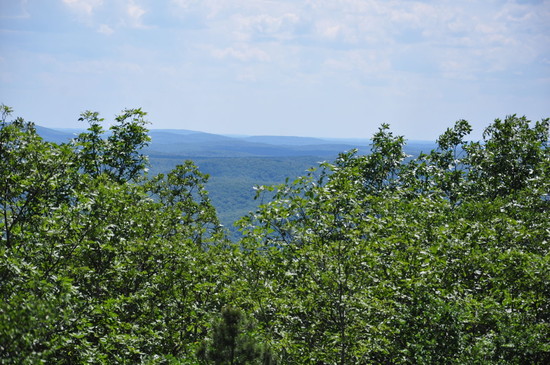 I later found other glades and outcrops that provided much better views to the south. 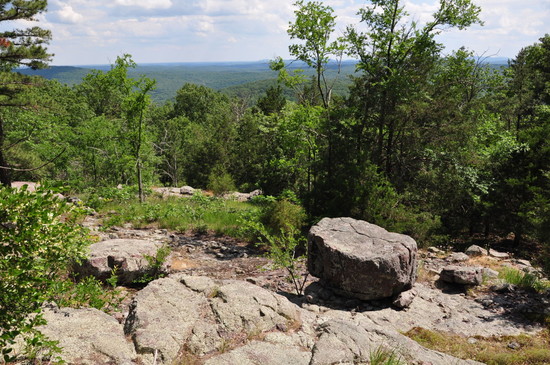 From one of these perches, it's possible to see straight down to Route E and farm fields to the southwest. 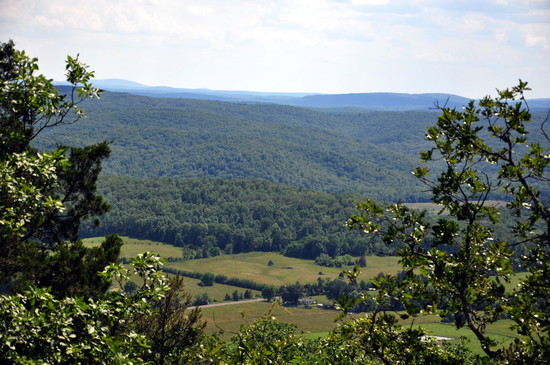 These glades provide some of the best views in all of Missouri, but it's not an easy trek to reach here. There are no trails except for overgrown logging roads that haven't seen vehicular traffic in decades. I followed a route that climbed past Black Mountain Falls (a series of cascades and waterfalls above Route E) before continuing up the mountain on the logging roads.

Unfortunately, the final road segment ends short of the summit, requiring a hike through dense vegetation to reach the high point as well as the glades. Therefore, I recommend visiting in the winter.

(These are the same directions I gave earlier for Black Mountain Falls.)

From Cape Girardeau, take Highway 72 west through Jackson and Patton Junction to Fredericktown. Follow the Highway 72 bypass around Fredericktown, then turn left at the on-ramp for US 67 south. After merging on the freeway, take the first exit for Route E and then turn right. (Note: As an alternative, you can also drive through downtown Fredericktown using the 72 and 67 business loops.)

Drive 11.4 miles west on Route E beyond the interchange. The road threads a needle between the St. Francis River on the left and Black Mountain on the right. Look for a spot where the road makes a subtle S-curve and crosses a culvert. The lower falls is visible on the right. Parking is limited here, but a pullout -- with just enough room for two cars -- can be found a short distance ahead on the left. If you reach County Road 472, you've gone too far. 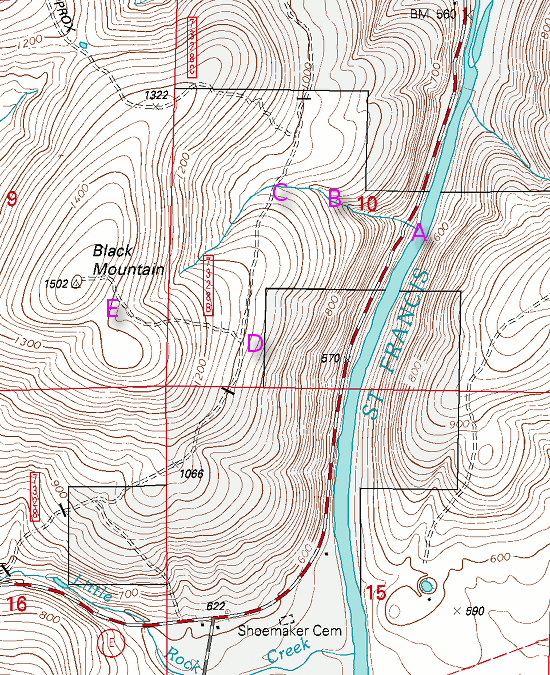 From the highway (Point A), walk to the lower waterfall, then climb past it on the left side. Keep following the creek, crossing where necessary, until reaching the upper waterfall (Point B).

Continue along the creek past the upper falls. Eventually, the rock-bottomed creek will transition to a more mundane gravel creek bed. Look for a faint logging road that crosses the creek in a north-south fashion (Point C). Turn left and follow the road, labeled as Forest Road 7328 on the map, as it slowly climbs the mountain.

Look for an intersection (Point D) with another logging road on the right, 7328B, and then follow this road to the end (Point E). After the road fades away near a wildlife pond, continue uphill to the summit. The glades with the best views are on the south side of the mountain.