You can't get there from here.

That was Cape Girardeau's unofficial motto during the 1910s. Thanks to the construction of the Diversion Channel -- derisively known as "The Big Ditch" by many -- the city was cut off from areas to the south.

The Little River Drainage District was helping to bring an economic boom to Swampeast Missouri, but Cape Girardeau was missing the boat because of a lack of bridges. The Big Ditch was an obstacle just as formidable as the Mississippi River. In fact, it was even more so. At least the Mississippi had ferry crossings, while the drainage district refused to allow ferries on the Diversion Channel because they would interfere with the levee.

During the winter of 1918-19, the Rock Levee Road leading south to Scott County was closed more often than it was open. As the main north-south artery out of Cape Girardeau, the loss of this connection represented a crisis for the town. Just imagine if modern-day Interstate 55 was completely closed for weeks at a time without warning: such was the sorry state of transportation in those days. 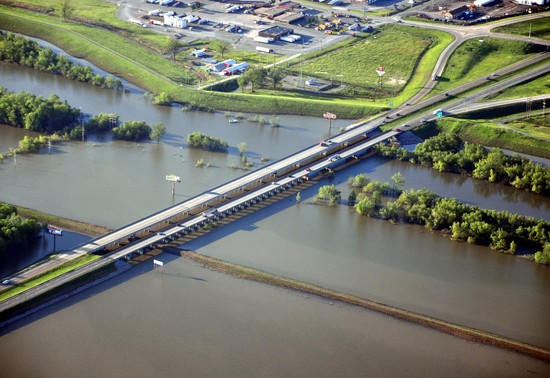 Interstate 55 crosses a swollen Diversion Channel during last year's flood. While the 2011 flood did play havoc with roads throughout Southeast Missouri, it wasn't as bad as the 1910s.

In a series of harshly-worded editorials, the Southeast Missourian endorsed Giboney Houck's mission to pass a bill in the state legislature to require the Little River Drainage District to pay for bridges across its own channels. One commentary, entitled "Justice will prevail," proclaimed, "The Missourian believes that practically every person in Cape county who is not a landowner in the district is in favor of doing everything that can be legitimately done to relieve the county of a burden that, under the circumstances, in unjust."

"If Cape county must pay for the bridges," the editorial added, "the very life of this town and county has been strangled for a generation to come. If the drainage district must pay, those who are profiting liberally from the undertaking will never realize it."

Giboney Houck, newly elected to the state house, teamed up with Dr. A.J. Speer of Bollinger County to introduce the bill. Bollinger County faced the same problem, with roads at the southern end of the county also cut off by the Big Ditch.

Underscoring the gravity of the situation, the newspaper ran three different stories about the "bridge question" on Jan. 29, 1919, as well as another editorial. This piece claimed that an unnamed person was spreading rumors around Jefferson City that the bill was merely part of a "feud between the Houck family and a certain other family" and that the legislature shouldn't be "expected to wash family linen."

This was a "lie without the least foundation," the newspaper retorted. "It is regrettable that such unscrupulous tactics should be used to thwart the will of the majority, but coming from the source they do, we are not surprised."

The following week, an editorial in the St. Louis Times newspaper echoed the accusation that the Houcks were only carrying out a feud. As part of the escalating war of words, the Southeast Missourian counterattacked with a front page expose.

"It is interesting to note that a Mr. Buder, one of the very rich Republican politicians of St. Louis is a large stockholder in the Times and is known as one of the controlling factions of the newspaper," the story said. "It also interesting to note that Mr. Buder is a large owner of lands in the Little River drainage district and has had much to say in the manipulation of its affairs. So the St. Louis Times takes a stand for the rich landowners against the people of Southeast Missouri in order to benefit Mr. Buder."

To bolster the argument against these "rich landowners," the newspaper reprinted a story penned by Jack Blanton of Paris, Missouri, described as "one of the great country editors of Missouri." Blanton's story explained, "Some rich men bought up a large body of land in Scott and Mississippi counties and formed a drainage district under the laws that make it necessary for counties to build all the bridges. This makes 'fine pickings' for rich men."

"They buy up the worthless wet lands and a few dollars an acre and put through a drainage scheme," the story continued. "They cut the established highways and leave them destroyed. Then their counties are forced to build bridges over the ditches. After the drainage ditches are dug these men sell the land to farmers at big prices and clear up immense profits. They show the farmer the drained land and point out the fine bridges, which add to the value of the land. The land outside the drainage district is not benefited a penny. But the outside land is taxed to pay for the bridges that put the value on the worthless land and enable the owners to make vast profits."

In the next day's issue, the Missourian reported that the drainage bill had gone missing during a committee hearing, leading to rumors that it had been "swiped" by opponents. However, the bill had merely disappeared in a pile of papers and was later found. Despite this snafu, Giboney Houck reported to the newspaper that he was "well pleased" with the progress the bill was making and thought it would pass the house by a "large majority."

He was quite naive. The Little River Drainage District and its allies were fighting back with an all-out lobbying effort. In April, the district distributed a quarterly bulletin attacking both the Southeast Missourian and the Houcks. The bulletin, anonymously written, accused the newspaper of carrying "persistent and insistent propaganda of misstatements, misrepresentations and inuendo."

The newspaper procured a copy of the bulletin, printing it in full on April 7. The next day, the newspaper followed up with a rebuttal, arguing that the "drainage lawyers" were the ones spreading propaganda and "trying to mislead and deceive and in this way confuse the issue." In a sarcastic twist, the newspaper suggested that the "honorable gentlemen" who worked for the drainage district could not possibly have written the bulletin, since it is "hardly believable that they would stultify themselves by such gross inaccuracies."

Then, the following day, the newspaper pressed on with another diatribe, accusing the drainage district of deception. The original bond issue for the drainage project included money for building bridges, but then the district decided to spend that money on other work. Therefore, landowners in the district were paying higher taxes for bridges that the district had no intention of building. "This is a matter of court record," the editorial stated.

Actually, the district did quietly pay for some bridges. According to the same editorial, railroad companies were "paid in cash" by the district to build permanent railroad bridges across the Diversion Channel. 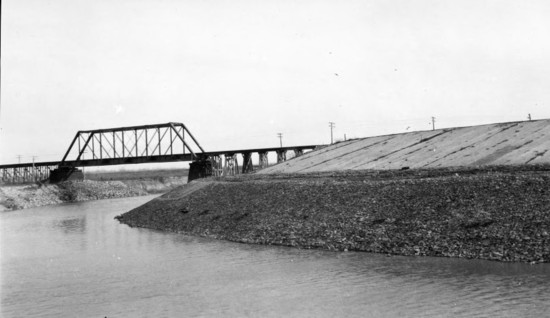 It's possible that the drainage district thought it would be easier to pay off the railroad companies rather than risk a big lawsuit against the Missouri Pacific or Frisco empires. Cape Girardeau County government and the Houcks were small potatoes by comparison, not composing a serious threat.

The drainage officials were right. Despite passing the house as predicted, Giboney Houck's bill died in the senate. Dr. Speer, who had sponsored the bill, later reported that, during the session, he "learned much about the weakness of human nature and the love of money." Apparently the bill attracted more lobbyists than any other legislation that year. In the end, the powerful shareholder of the St. Louis Times was able to single-handedly kill the bill.

Speer hoped that the political corruption of St. Louis would be exposed, and that the "public will eventually get a square deal." The Houcks continued to battle against the drainage district, but to no avail. They had lost the Great Diversion Channel Bridge War.

Things did work out fine for Cape Girardeau -- but it took several more painful years to get there.

Not banking on the outcome of the 1919 legislative session, county officials considered, and then rejected, a proposal to build a low-cost suspension bridge at Rock Levee Road. Instead, a St. Louis company was hired to build a $4,000 steel bridge that would last "eight or ten years at least." 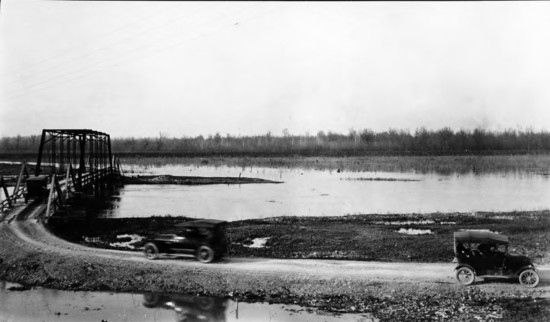 This photo appears to show one of the bridges on Rock Levee Road. (Photo from the Little River Drainage District Collection, Missouri State Archives)

This semi-permanent crossing was a huge bottleneck to traffic. Not only did it include the Diversion Channel bridge, but the Rock Levee Road also crossed a lateral ditch as well as Ramsey Creek. The lateral ditch bridge deteriorated to the point where it only had a 2-ton weight limit. Newspaper clippings reveal that these bridges were frequently closed for repairs. In 1922, a large traffic jam including "at least 200 cars" blocked the road for two hours. This would be one of many traffic jams at this location.

It was around this time that a funny thing happened in Jefferson City. After years of forcing county governments to deal with road and bridge building, Missouri hit upon a bonanza: gasoline taxes. Flush with cash following the passage of a statewide gas tax in 1921, Missouri embarked on an ambitious road building program. It took a few more years, but the state highway department came to the rescue in 1925 to build a $150,000 bridge across the ditches south of Cape Girardeau on Route 9, later known as US 61.

For once, Cape Girardeans could cross into Scott County without worrying about being stranded because a bridge was closed yet again. Missouri legislators had created this whole mess with their ambiguous and unfair drainage district law, but it was Missouri that finally solved the problem. 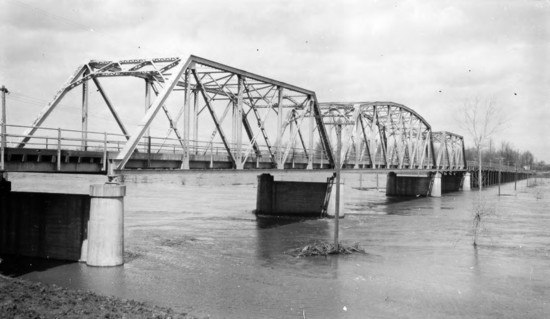 During the 1930s, two more state highway bridges were built over the Big Ditch in Cape Girardeau County. A large truss bridge, since replaced, was constructed at Blomeyer in 1932 to replace a series of makeshift crossings. In 1938, a steel girder bridge was built at "NUT Junction" southwest of Whitewater; this structure remains in place.

Another bridge, the oldest remaining over the Diversion Channel, is still standing, but is now threatened with demolition.

Next, in Part 3: Why the Allenville Railroad Bridge is historically significant.