Looking back through the archives of the Southeast Missourian, I was surprised by how much ink was spilled over the question of building bridges over the Diversion Channel in the 1910s. This doesn't sound like the kind of issue that would lead to such rancor, but the "Great Diversion Channel Bridge War" brought out some of the most passionate editorials in the publication's history.

The newspaper picked the losing side in the battle: the Little River Drainage District was able to avoid paying for new bridges over the Big Ditch, instead passing that responsibility to county and state taxpayers. Permanent bridges were finally built across the ditch, reuniting Cape Girardeau with towns to the south. Of these bridges from the late 1910s and early 1920s, only one has remained standing: the Allenville Railroad Bridge.

This bridge is the oldest span across the Diversion Channel, and might possibly be the oldest bridge over any of the ditches of the Little River Drainage District. A plaque on the bridge's steel trusses proclaims that it was built 1918 by the Bethlehem Steel Bridge Corp. of Steelton, Pennsylvania.

Don't tell that to the owners of the bridge, though. They don't know what they have. The proprietors of the railroad line between Jackson and Delta intend to dismantle the tracks and all of the bridges along the route. In their petition to the Surface Transportation Board, the railroad company downplayed the bridge's significance by saying that it was built in 1954.

Bzzt, wrong. Portions of the approach to the bridge were repaired in 1954, but the main span over the Diversion Channel dates back to 1918 when the channel was constructed.

I have proof. By itself, the 1918 plaque wouldn't be enough to confirm the construction date (since bridges are sometimes relocated to new sites many years after they've been fabricated). However, historic photos from the Little River Drainage District collection at the Missouri State Archives show this bridge standing at its present location by 1919. 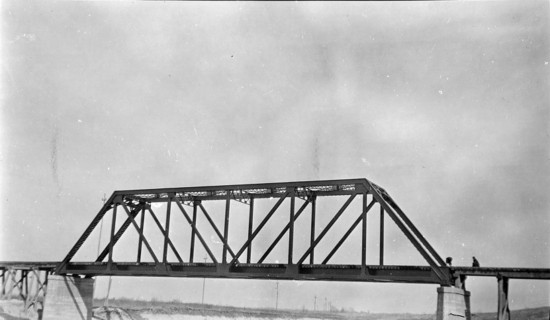 Second, a photo from June 5, 1919, provides a wider view of the bridge. While many of the photos from the drainage district's collection do not have captions, this one is very specific: "i.m. r.r. br. at allenville june 5, 1919." This refers to the Iron Mountain Railroad, which had merged with the Missouri Pacific Railroad just two years before. 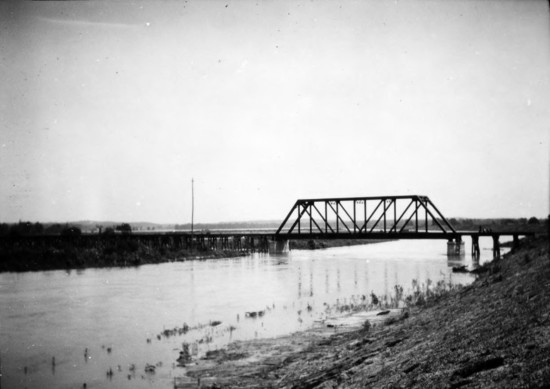 Finally, another photo was taken during a flood. This picture is undated, but the bridge's design appears to be identical to the other photos. 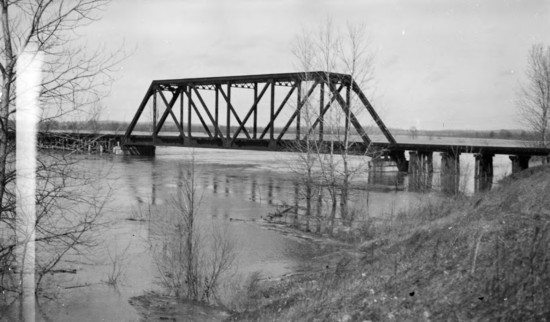 It's safe to say, therefore, that this bridge is much older -- and historically significant -- than what the owners have claimed. Meanwhile, the railroad company's petition also downplayed the significance of the Diversion Channel, saying that it is "one of eleven Diversion Channels in this area." That's a mighty peculiar thing to say; it would be like claiming that the Mississippi River is merely one of eleven rivers in Missouri.

The Diversion Channel was, and continues to be, a cornerstone of the whole project to drain Swampeast Missouri. As the last original bridge spanning the Big Ditch, the Allenville Railroad Bridge is a key artifact from this period in regional history. As I explored in previous blogs, the question of paying for bridges led to a Missouri Supreme Court case, changed the outcome of an election, and set the stage for a dramatic legislative session in Jefferson City.

As a result, I suspect that the 94-year-old bridge could be successfully nominated to the National Register of Historic Places. Unfortunately, the Missouri State Historic Preservation Office as well as the Cape Girardeau County commission don't see it that way. They signed off on the railroad company's petition.

A group is actively seeking to convert the railroad corridor, including its bridges, into a walking and bicycle trail. The Surface Transportation Board has granted the group a limited amount of time to pursue their idea. However, if the rail-trail proposal is unsuccessful, the Jackson Branch Railroad and all of its bridges will become toast.