"This reclamation project is undoubtedly the most important work of its kind ever attempted in the United States, if not the whole world."

It would be natural for a man in his position to exaggerate the importance of his job, but William O'Brien was sincere. He was overseeing a plan by the Little River Drainage District that was unprecedented in civil engineering history. Even in modern times the audacious project to drain Swampeast Missouri represents a staggering achievement, one that required moving more dirt than the entire Panama Canal.

The fruits of this labor are now taken for granted, with little thought given to the historic significance of the drainage project. There are no historic markers along the 957 miles of ditches or 304 miles of levees. No part of the system is designated as a Historic Civil Engineering Landmark or listed on the National Register of Historic Places.

For one thing, it's hard to get excited by a series of muddy ditches or mundane levees. The most important ditch, the Headwater Diversion Channel, doesn't have an inspiring name. Unlike other reclamation projects, ours doesn't have a major shiny landmark, such as a large dam, to focus on. There's little scenic beauty at first glance: just flat ground, over a half-million acres of it, criss-crossed by ditches and levees at unnatural angles. 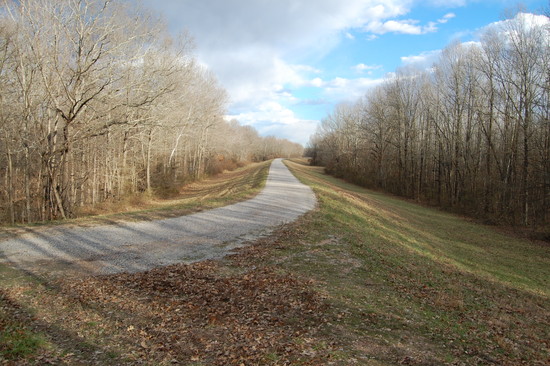 Here is the spot where it all begins: the western end of the Diversion Channel levee in Bollinger County near Greenbrier

The lack of scenery, however, is balanced by a gold mine of stories -- and drama. It's impossible to build a project this colossal without opposition, lawsuits, and ugly political skirmishes, and this was no exception. Louis Houck and his family waged an epic, but mostly futile, battle against the Little River Drainage District for years.

At first Houck was in favor of the drainage project as a way to benefit Southeast Missouri. He had some reservations, but generally agreed with Otto Kochtitzky, the visionary behind the plan, about the economic boom that it could provide. But then he soon realized that the project would have a negative impact on his own finances since his family owned considerable acreage within the newly created district. Under Missouri law, the district was vested with wide-ranging powers for eminent domain and taxation. Houck worried that the organization was getting too big for its britches.

In his book A Missouri Railroad Pioneer: The Life of Louis Houck, Joel P. Rhodes examines Houck's opposition to the drainage district: "Louis thought he smelled an unholy conspiracy of avarice between the Little River Drainage District, big lumber firms such as Himmelberger-Harrison and International Harvester, real estate speculators, outside investors, and their allies in county and state government."

Houck argued that the Diversion Channel, a key part of the plan, would likely cause flooding problems in Cape Girardeau County. He thought it was unfair that landowners in counties to the south would benefit from drainage while landowners near Cape Girardeau would suffer. Of course, Houck just happened to own vast acreage along the proposed route of the Diversion Channel. He had a good point, though. Just ask anybody in Allenville or Dutchtown about their never-ending flooding problems.

Despite filing repeated lawsuits challenging the authority and constitutionality of the drainage district, Houck was never able to beat them in court. Sick of dealing with Houck's litigation, the district finally gave him over $100,000 as compensation for "alleged damages" to his land. If they thought this consolation prize would force Houck to shut up, well... it didn't work.

Houck next seized on a hotbed issue that had outraged residents of Cape Girardeau County. Thanks to a loophole in the law, the Little River Drainage District wouldn't have to pay to build bridges over the Diversion Channel. Instead, the county government would have to foot the bill.

After work started on the Diversion Channel in June 1914, the "bridge question" soon came to a head. Once the channel was dug, some towns would be cut off from the rest of the county unless expensive bridges were built, and nobody wanted to pay for them. Cape Girardeau County sued the district in 1915 and was granted a temporary injunction prohibiting the district from cutting through any public roads unless it agreed to build bridges. However, this order was soon lifted and the case eventually made its way to the Missouri Supreme Court.

The court was clearly uncomfortable with the law as written, saying that a "studied effort seems to have been made to render this drainage statute vague and ambiguous." (This provided ammunition for Houck to argue that a conspiracy was afoot.) Nevertheless, the court had no choice but to uphold the law in favor of the drainage district. "We can only repeat that the remedy lies with the Legislature and not with us," the court wrote. "We construe the law; we do not make it."

An effort was made in 1917 to pass a bill in the legislature to fix the problem, but it failed. Meanwhile, work on the Diversion Channel had reached Allenville. Several important roads, including the Cape Girardeau-Bloomfield Road, were about to be cut off, but the county still balked at paying for permanent bridges. As a stop-gap measure, the county arranged to relocate an old iron bridge from a place called "Craig's Gap" to be used at Allenville. This temporary "hand-me-down" bridge became a permanent fixture at Allenville until it collapsed under the weight of a tractor in 1977. 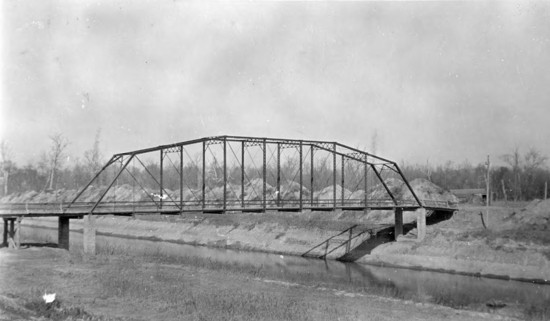 Later, as the Diversion Channel reached the Mississippi River, rickety temporary bridges were built at Blomeyer (what is now Highway 25) and at the Rock Levee Road (near today's I-55). These crossings were unreliable, washing out after every major rain.

A meeting was held in Cape Girardeau to discuss the possibility of floating a $200,000 bond to pay for permanent bridges. The Weekly Tribune newspaper covered the meeting and reported that "Ex-Mayor Will Hirsch called the present bridge situation ridiculous. The business men and property owners, he said, could not go to sleep, while Cairo and other cities south of the Cape were annexing all of the trade that was brought to this city before the drainage channels were cut through the lands south of the city."

Louis Houck vigorously opposed the bond issue, arguing that another attempt should first be made to convince the legislature to fix the problem and require the drainage district to pay -- as the Supreme Court had suggested. In response, proponents of the bond issue placed a large, but unsigned, advertisement in the Weekly Tribune newspaper attacking Houck, but not by name. "Then ask how one man from this county could compel a whole State Legislature to undo what another whole legislature had done. If there is a man in this county who can do it, what is his name? The next man you meet, who is against the bond issue, ask him why he wants to kill Cape Girardeau?" (It's clear that mug-slinging political ads go back a long way.)

The bond issue failed by a large margin. Houck saw an opportunity to go on the offensive and use the ballot box to his advantage. He arranged for his son, Giboney, to run for the Missouri house on a single platform of fixing the "bridge question" once and for all. 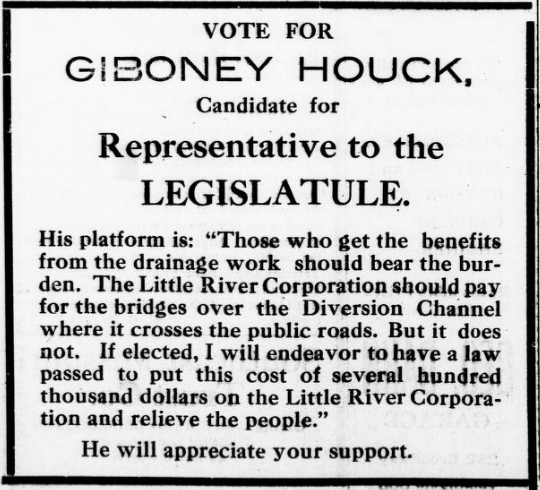 Giboney Houck ran this political ad in The Weekly Tribune newspaper on Oct. 17, 1918. (Image from the Library of Congress)

Just before the election, Louis Houck posted an ad in the Southeast Missouri attacking the drainage district (but without mentioning his son's race). He called the bridge law a "monstrous and outrageous burden and tax that has been saddled upon our people unjustly and wrongfully."

Giboney won the election, but just barely. Unofficial reports showed he beat the incumbent, Fritz Siemers, by only 16 votes. This was still quite a feat, however, since Giboney was the only Democrat to win a race in Cape Girardeau County during that election.

By December, the bridge on the Rock Levee Road -- the main road south of Cape Girardeau -- was out again. County engineer Dennis Scivally wanted to build a more durable steel bridge, but this wouldn't be possible for "several months" because the drainage district was reconstructing the main Diversion Channel levee to push it back 100 feet. 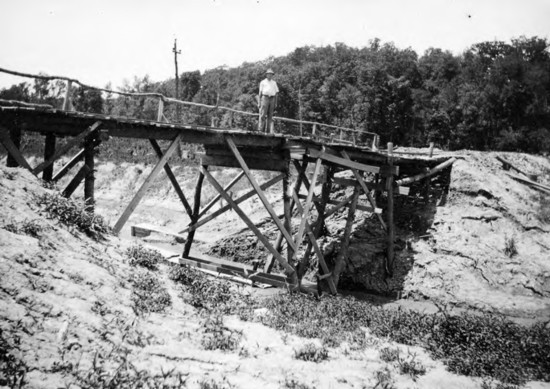 A low-budget temporary bridge built across one of the waterways of the district (Photo from the Little River Drainage District Collection, Missouri State Archives)

The loss of the road to Scott County was a huge setback for Cape Girardeau, one that no doubt irked many local residents, with the Little River Drainage District the target of their scorn. The "Great Diversion Channel Bridge War" escalated as the Southeast Missourian jumped into the fray with a series of editorials featuring an intensity that has been rarely matched since.

Next, in Part 2: Mr. Houck Goes To Washington Jefferson City.