As I've explored in previous blogs, road names can reveal interesting tidbits of history. They can also be a real let-down if they are named for something that used to be there. Just try finding an iron bridge along Iron Bridge Road near Gorham, Illinois. It's long gone.

Despite a few wild goose chases, however, I've usually had good luck exploring roads with intriguing names. Take, for instance, Old Brick Road on the south side of Murphysboro. It delivers what it promises. 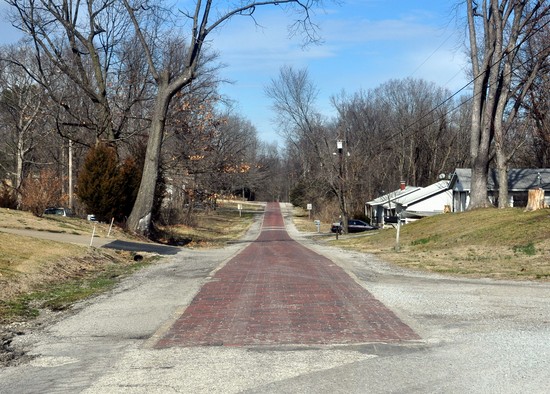 This is a vintage one-lane road paved with bricks and lined with concrete edging. 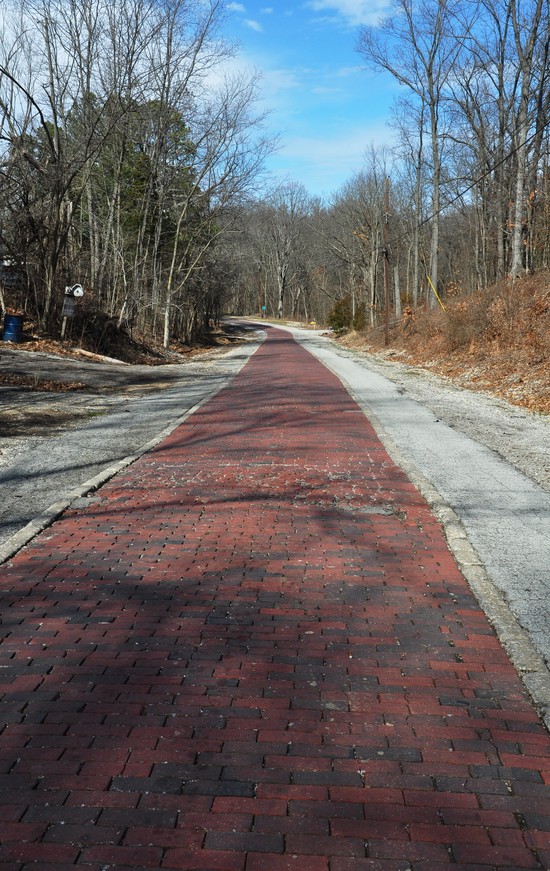 Based on old maps, it appears this brick highway was once the main thoroughfare between Murphysboro and Carbondale. The narrow brick lane was clearly insufficient for traffic, as wide asphalt and gravel shoulders were added on both sides. 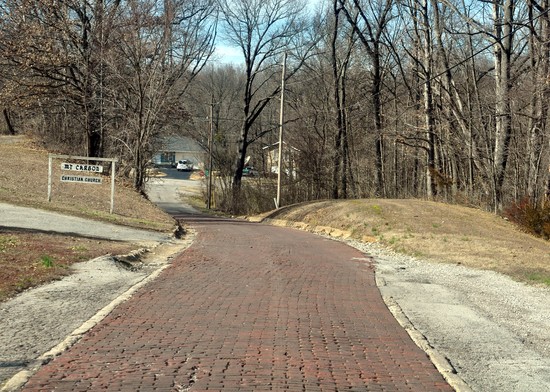 During the late 1910s and early 1920s, Illinois experimented with building numerous brick highways. In 1922,

the newsletter of the National Brick Manufacturers' Association boasted that Illinois had awarded a contract to J.E. Craine of Murphysboro for building a brick road between Cobden and Dongola along Route 2 (later US 51).

With a length of 13.32 miles and a width of 18 feet, this project would have been a serious undertaking. Thankfully, there was a convenient source for large quantities of brick: The Murphysboro Paving Brick Company.

Advertisement from the March 1921 edition of "Municipal News & Water Works"

Started in 1908 as partnership between William H. Hill of East St. Louis and Henry Jenkins of Murphysboro, the company grew quickly, producing 50,000 bricks per day by the following year. A story in Brick and clay record magazine in 1909 showcases the new plant, including photos and technical specifications.

The same publication included a brief note about a city engineer in Pennsylvania who was championing the use of brick instead of asphalt for city streets. He argued that "while the asphalt is less noisy and handsome, the brick has longer life, can be laid on steeper grades and is more easily repaired."

Indeed, the future was bright -- for awhile. Taking advantage of high-quality shale deposits, cheap local coal to heat the kilns, and convenient access to three railroads, the Murphysboro company was poised to make a killing. After landing its first big contract to deliver bricks for Carbondale city streets, the company had trouble keeping up with demand, adding four additional kilns (for a total of 10) during 1909.

Its "Egyptian" brand paving bricks gained a reputation for hardness and durability compared with bricks from other manufacturers. Poplar Bluff, Missouri, paved its downtown streets with Egyptian bricks in 1913. 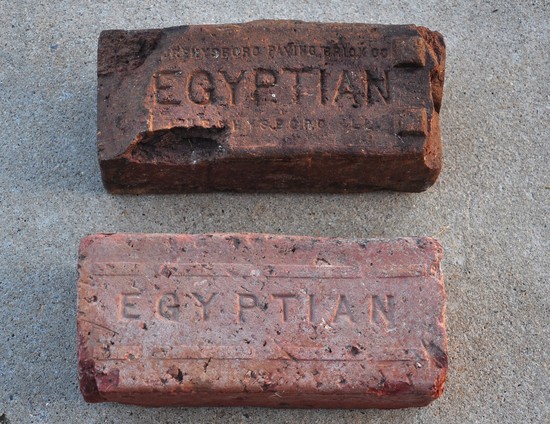 The big score came in 1915, however, when the U.S. government ordered two million Murphysboro bricks to be used in the construction of the Panama Canal. Transported by rail to New Orleans and then by ship to the Canal Zone, this order tied up the company's production for years.

During the 1920s, the company had expanded to 25 kilns and continued to crank out paving and construction bricks for projects all over the place. A newspaper story from 1927 reported that "the ever-increasing sales of automobiles demands a continuous program of road building throughout the United States, so that the prospects are very bright for increasing sales of the product of the Murphysboro Paving Brick Company."

Unfortunately, this optimism didn't last long. A foreman who worked at the plant, William W. Kelly, explained the company's demise in a 1974 newspaper article. He said, "A large number of bricks were sent to Florida, for various types of construction. The plant suffered a financial setback when Florida put an embargo on such materials coming into the state, and the loss of business contributed to loss of the plant."

The Great Depression, of course, didn't help matters. In 1931, the company shut down operations in Murphysboro and relocated to East St. Louis. The kilns and buildings were razed, and the shale quarry became a large lake. The acreage is now a private estate at the northern outskirts of Murphysboro and is not accessible to the public.

While the plant is long gone, Egyptian bricks can still be found in many places in Southern Illinois and beyond. Not surprisingly, Murphysboro still has a large number of brick streets throughout town, and even those streets paved in asphalt probably have Egyptian bricks somewhere underneath. 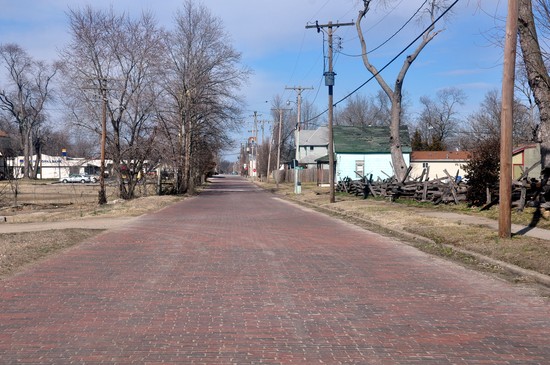 Glancing at satellite images, several Illinois towns, including Carbondale, Harrisburg, Eldorado, Herrin, and Cairo, have retained many of their brick streets. Curiously, it appears that Anna, Marion, and Benton each have only one brick street remaining. It's not clear if this is a coincidence, or if the city fathers couldn't bring themselves to pave over the last of the bricks. 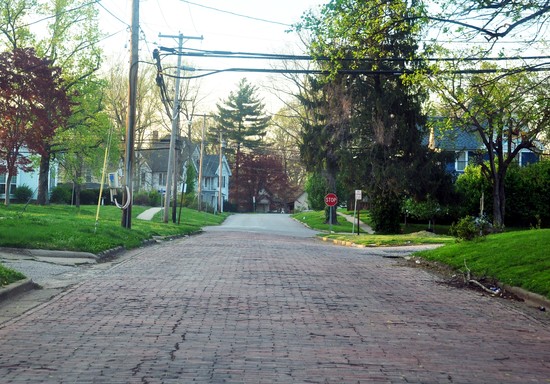 Of these remaining brickways, the Old Brick Road outside of the Murphysboro is the most fascinating example of this brief era of construction. With our modern concrete and asphalt highways, it's easy to forget that bricklaying was, at one time, a cutting edge technology for road construction.

To find the Old Brick Road, take Highway 127 north past Alto Pass and Pomona. On the approach to Murphysboro, the highway comes to a four-way intersection and stop sign at Old Highway 13. Continue straight ahead to the beginning of the brick road.