In the past, I've complained about the crazy highway system in Illinois and the lack of road signs. The highways are still as crazy as ever, but at least many Illinois counties and townships are starting to join the rest of civilization by posting street signs at intersections.

The colorful names are in stark contrast to the bureaucratic three-digit road numbers that we have in many Southeast Missouri counties. "Cape Girardeau County Road 635" just doesn't have the same charm as "Upper Egypt Road."

While the numbers are more convenient for driving directions and E-911 purposes, something was lost when the old road names were replaced by stale numbers. I prefer the system used in Clay County, Arkansas: each road has a number and a name, which satisfies the needs of emergency responders while also retaining the classic, historic names.

I've tracked down the origins of a couple of the more interesting names in Southern Illinois. Unfortunately, this information won't come in handy the next time you find yourself lost in Little Egypt deciding whether to turn left, right, or make a U-turn at some intersection out in the sticks. 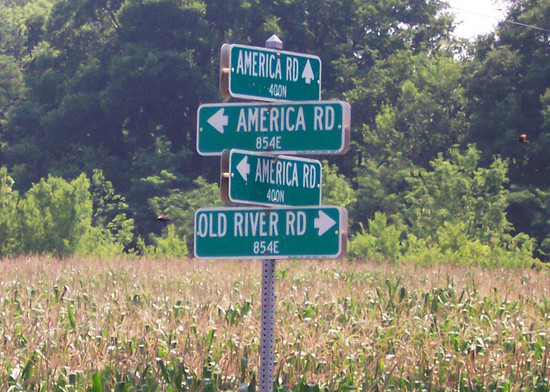 Almost all roads lead to America, at least according to the sign at this intersection in Pulaski County, northeast of Mounds. This was the site of America, a town that served as the original county seat of Alexander County before the county was split to create Pulaski County.

America was at the center of two wild schemes. One was to build a canal connecting the Ohio and Mississippi rivers, providing a convenient bypass of the mouth of the river (today's Cairo). This would have been a miraculous engineering feat, especially for a region that, in the late 1810s, was basically still wilderness. The plan didn't go anywhere.

The other scheme was even more daring: establish a town that could serve as a replacement for Washington, D.C. After the British sacked the nation's capitol during the War of 1812, there was a movement to relocate the seat of government to a more secure, inland location. America, conveniently located in the middle of the continent close to two major rivers, would have made a fine choice. Needless to say, this plan didn't go anywhere either.

The original plat for America included streets named after states in the union (just like Washington, D.C.). One of those street names, Maryland Street, was still marked until modern times, although current maps now show it only as America Road.

After losing the county seat in 1835, the town died, although the location remained as a river port called America Landing. The name came back to life when the New York Central Railroad was built in the 1870s a short distance to the west. A new town of America, including a depot and post office, grew up along the tracks. After the railroad was dismantled, the town faded away again.

Sears Road and Roebuck Road, both located north of Cairo, immediately caught my attention when I was looking at the map. What the heck was a Sears & Roebuck store doing out in the middle of nowhere near the Cairo airport?

It turns out, nothing. This wasn't the location of a store. This was the location of a factory. Cairo, Illinois, was one of the shipping points for Sears Modern Homes. Taking mail-order catalogs to the extreme, Sears, Roebuck & Co. started offering house kits in 1908. You would place an order and soon an entire house would be shipped to your town by boxcar, including almost all of the parts needed to build your own home.

The Cairo plant opened in 1911 and continued manufacturing Sears houses until it was sold in 1940. At the peak of sales in the 1920s (before the Great Depression), the Cairo plant shipped an average of 250 home kits per month, cranking out an astounding 324 units in May 1926.

Nothing remains of the plant, although some Sears catalog homes can be spotted in the area, including one on Roebuck Road itself.